It took nearly a month of telephone calls, research, lots and lots of perseverance, and a full day of exacting work, but our previously “dead” furnace is now running like new.

We were hoping to repair… not replace… the furnace, and this turned out to be a problem because the part we needed didn’t seem to exist. There used to be two dealers within a sixty-mile radius selling and servicing this kind of furnace. The dealer we bought the furnace from went out of business a few years ago. The other dealer is closing his business in a few months because of the recession and he had absolutely no interest in trying to help us find parts or information. 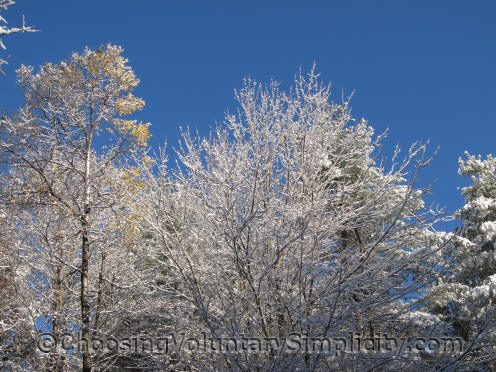 Our next step was to call the company who manufactures this furnace. The customer service person there flatly said to call a dealer and that she could give us no further information. During the next several days I think we must have called practically every dealer in the United States who sells parts or the newer versions of this furnace. Without exception, everyone we talked to was extremely interested in selling us a new furnace, but their interest level went way down when they realized we were trying to find a replacement part for the furnace we already have. Apparently the combustion fan assembly for the type of furnace we have was prone to failure, and the entire assembly was redesigned several years ago. Every dealer we spoke to said the redesigned assembly would not fit in our older furnace and that there was no possibility of finding a used assembly because of the problem with the design.

Eventually we found a dealer in Washington state. This was a family business and the original owner just happened to be in the store the morning that my husband called. The current owner, his grandson, said he could not help us but his grandfather might be able to. This man, who was in his eighties, was aware of the weakness in the combustion fan assembly… but what made this man different from everyone else we had spoken to was that he also knew how we could fix it!

He told us that although the redesigned combustion fan ASSEMBLY would not fit our furnace, the manufacturer did sell a combustion fan MOTOR that we could install into the assembly we already had. He said the reason the other dealers didn’t know about this part is because it is not listed on the manufacturer’s official parts sheet… and that replacing this part in the assembly would be a very detailed job that would involve dismantling almost the entire furnace, and that the time involved makes this a very expensive repair. He seemed pleased when my husband told him we were going to replace the part ourselves. When the part arrived less than a week later, there was an accompanying note warning of a couple of problems we might encounter during the repair process and how to deal with them.

The elderly man in Washington had not been exaggerating when he said that we would have to practically dismantle the furnace. Luckily my husband is naturally a very methodical person (and I can be if I have to)… so we began by making notes and diagrams as he took everything apart, including marking the location of every wire and every type of screw. When we felt we needed to have an especially clear record of how certain parts went together, I took before shots with the digital camera. The dismantling took a very long time… actually, several hours… but eventually most of the furnace was spread out in pieces on the floor, and it was a fairly simple procedure to remove the broken motor and replace it with the new one. After that it was a straightforward job to reverse the process and re-assemble the furnace. We cleaned every part and replaced the old gaskets with new as we put everything back together… always referring to the diagrams and digital photographs to be sure we were getting everything back in the right position.

Finally the last screw had been inserted… the furnace had been reconnected to the fuel and exhaust lines… and it was the moment of truth. My husband turned the thermostat and we anxiously waited to hear the hum of the fan. A few minutes later the furnace started throwing out heat. We had fixed it!

We save a lot of money by being able to fix things ourselves. We never call plumbers, electricians, or any other professional repair people because we have taught ourselves how to do these types of repairs. Fixing this broken furnace turned out to be somewhat more intimidating than the usual do-it-yourself project… but because we took it one step at a time, it was very doable.

It feels good that we didn’t have to junk an otherwise perfectly good furnace because of one small faulty part… and knowing that we saved several thousand dollars by doing this repair ourselves feels pretty good too!

Seriously, we live in a terrible throw away society. I wonder how much we waste, as a country or even as a world, by making things that can’t be repaired. It used to be that most everyone could repair just about everything they owned or find someone who could. Now business just says, sorry, this will have to be replaced.That’s not a very economical way to live in a world of diminishing resources.

Growing up poor in Maine has helped me to be very careful with my money and even if I could buy new today, I always look to see if I can fix it first. But things are made to be very complicated. Sometimes “progress” isn’t all that it’s cracked up to be. Maybe these difficult economic times we are going through will teach others, by necessity, to fix and repair instead of going into debt.

I come here every day, Shirley, for inspiration and ideas that enrich my life in so many ways. God bless you and yours.

Wow, what a job! Good for you.

Wow! What a story. Good thing you were able to get it fixed in time for spring!

That is quite an accomplishment! I fixed a minor problem with my furnace after doing online research and I felt very proud of myself but it was nowhere near taking things apart like that.

I am just bowled over by you and your husband! So persistant and such a great example of team work and tenacity!!!! I have to say I would have caved in at such a monumental task but now after reading your journey…..I will try more.Thank you!

Great job! I’ve vowed to not dispose of anything until the last possibility of repair has been exhausted. And, as a corollary, not to purchase anything in the future that can’t be repaired.

I’ve heard that in Europe most items (toasters, refrigerators) are repaired rather than replaced — there is some kind of requirement that manufacturers have to provide this service. I don’t know if it is true or not. Here in the U.S., home of $10 toasters and $60 microwaves courtesy of China/Wal-Mart alliance, it doesn’t make economic sense to repair. Throw-away is built in despite the high cost to the environment.

It is encouraging to have such a blog as this where like-minded people can gather and enjoy companionship.

I’m impressed! Good job! My husband is great at researching repairs and DIY options. He has repaired so many things in our house :)

During my 3-year-long stay in the US, I was amazed to see how people seemed to throw away broken appliances and even cars instead of repairing them – then I learned first hand that repairing is much more costlier or repairing services are non-existent. When we came back to India I made better buying choices and made sure that each appliance that I buy have a service backup in place. I have totally avoided buying appliances like toasters and microwaves. Now we are even cutting down on electronic gadgets as well.

I LOVE this! When our one and half year old dishwasher stopped working we were so irritated that the only solution seemed to be buying a new one. The part was as expensive as a new one and with labor would have been more. I couldn’t imagine junking something where everything was functioning except the control panel for our children’s children to deal with. We waited a couple of weeks and our problem “went away.” It works on the two-hour delay now so we’re just sailing along (and have been for a long time) with that mild restriction. If it stops working on delay, we will try to soldier the component that is loose or affected by moisture or figure out a way to fix it. There are more costs than just the financial to consider.

Bravo! There is so much inspiration within this article about your furnace! Thanks for sharing.

What a wonderful example you set for so many. True perseverance…I so enjoy you blog!