Two Spools, Some Knots & a Short Piece of Rope

Our two cats just aren’t interested in the toys we have bought them… they completely ignore the tiny balls with bells, the green plush sneaker and even the little squeaky chicken hatching out of the egg.

They showed some interest in a small plastic bottle with beans inside, a small paper cup, and a large piece of crisp, crumpled paper… but just for a few minutes. 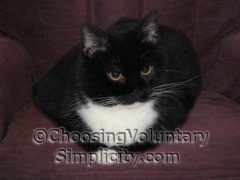 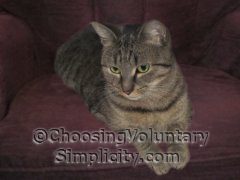 There is, however, one toy they both think is ALWAYS very fun and exciting…

… this is the simple toy I made for them using two spools, some knots, and a short piece of rope. It helps that the spools are hard plastic and make an interesting clanking noise when they knock together and that the rope is thick and soft and very flexible. Our older cat lies on her side or back, holds the rope in one paw, and bats at the spools with the other. The younger cat kicks the spools and rope ahead of her and pounces on them.

Our two dogs also aren’t interested in their “doggie toys”… even though they are all specially sized for their small mouths. Actually, our older dog almost never plays with toys at all… when she was a puppy she occasionally played with a dental floss box :o) … but now she prefers to race and run and jump and climb on things. 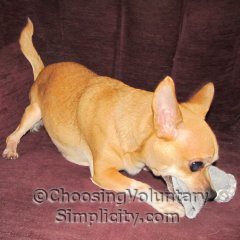 Our younger dog does have a favorite toy… this is her beloved “sock toy”… a complicated project that involves taking a clean, orphaned sock and tying it tightly in knots. (Knots feature big in the toys I make! :o)) She carries her current sock toy around with her most of the time, tossing it in the air and chasing it over and over again. She takes her sock toy to bed with her each night and even brings it with her when she sits on someone’s lap. Any sock toy becomes even more exciting when it has just come from the washer and dryer.

Obviously all four of them are minimalists!

The Day Your Life Really Begins

Are Your Hands Clean Enough?

Your babies are adorable! I agree about the toys – even my kids always were more apt to play with box the toy came in than the toy. Toys nowadays can’t compare to the simple toys that made kids use their imaginations.

Cute! I think I have some old spools stocked away. I’ll have to try this for our new kitten.

My dogs are like your’s, they never play with ‘real’ toys, just with other things that sometimes you wish they weren’t playing with. One of my dogs loves it when I give him a rolled up newspaper, he throws it and grabs it and chews it to pieces. What a mess – but the dog has a lot of fun.

My cat’s favorite toy is a long piece of fabric that used to be a belt for a cotton dress. He chooses that above anything else every time.

We once had an extremely large cat that thought he could get into any box. We used to give him a tiny box and watch his attempts to get inside. It would keep him interested for ages. We’ve had other cats since then but they’ve never had to same interest.

My cats are the same, their favorite toy is a wrapper from a lolly/candy not the waxed paper kind but the one that crinkles when you crush it!