Home » Doing It Ourselves » The Final Cut and Summer Memories

This was such a beautiful sight… to have ninety logs “done” and to see only one log still left to be cut. And there’s the little “brook” that formed under this log during one of our last torrential rains… and the thick layer of sawdust that is so wet and packed down, we’re having to rake it up in stages as it dries.

And here is the reenactment of the final cut… :o) done by my always obliging (left-handed) husband and a very overworked chainsaw. Overall we think the logs were of excellent quality, except for the four with mostly rotten centers, including this last log which we really could have done without… and several other logs that were somewhat difficult to cut because they were more than two feet across. 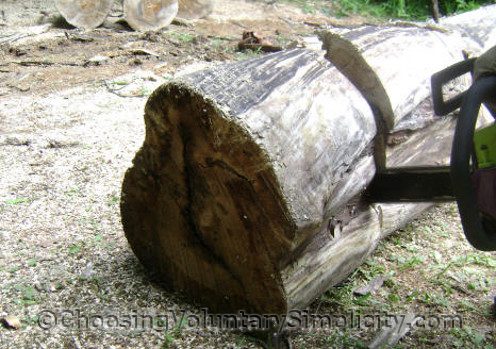 Within about a week after that final cut, all the wood had been split and stacked. We have measured the stacks of wood and have concluded that there were roughly eight and a half cords in the load. To cut, split, and stack that eight and a half cords of wood took almost exactly two months… more time than we had originally anticipated, but we didn’t expect that we would lose so many working days because of the rain… and of course we had so many other summer things to do, we could only work on the logs part time.

It WAS a tremendous amount of work, but it will be wonderful to have what we think will be a two-year supply of wood (including the firewood we had left from last year), all cut and split to the size we like to burn. The amount of money we saved was significant if you compare what we paid for the load of logs to the cost of wood delivered already cut and split… but those savings diminish considerably if time and effort are figured in. On the plus side… with better weather and a revitalized chainsaw, the project would have taken less time and would not have monopolized so much of our summer the way it did this year. The work was mostly enjoyable and the sense of accomplishment was huge.

Would we do this again? My husband’s answer is a definite yes… if we’re going to get another super wet summer, I might need some convincing. 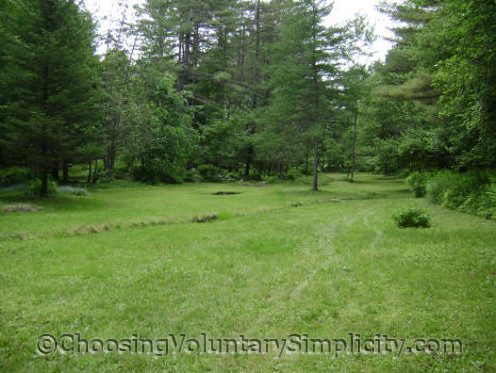 One of the things we enjoyed most about this whole experience was the area we were working in. Except for mowing it or walking through it, we had never spent much time in this end of our meadow, and we were astonished to discover what a lovely atmosphere it had. We started eating our lunch there every day that we worked on the logs, and as my husband often said, it would be difficult to find a more appealing place for a picnic. With the sound of the waterfall and the birds, the colorful clumps of pink joe pye weed bordering that area, the lush greenness of the trees and the ferns, it was a gorgeous spot to take a few minutes to relax and talk. I think those impromptu picnics may be some of our best memories of this entire summer.

A Trip Around the World Quilt… x 2

My god, I can’t imagine the work that must have been!

I want a meadow like that! Great job on the logs. You folks work really hard.

I am very impressed by your life style and inspired by your blog. We are just started on our path to a simple life and you have been such a help to us. Thank-you for all the great information.
Your true friend in simplicity, Ina

When I was a kid I and my brothers and sisters had a place like your meadow where we used to have spur of the moment picnics in the summer. It was very peaceful there and we spent a lot of time there. Your post made me remember what I hadn’t thought of in years. Thanks for that (and for a great blog).

I will think of you this winter, all snug and warm, burning the wood you worked so hard for and be reminded of the fable of the ants and the grasshopper.

To work hard now for benefits in the future is like money in the bank.