Home » Doing It Ourselves » Why Mark Shields Never Looked So Good!

Our old television was still working… sort of… but the screen would randomly get brighter or darker, the colors would fade, and the sound would distort. We couldn’t complain… this television had served us well for nearly fourteen years.

Anyone who wants to read only negative things about watching television should stop reading now. We’re not couch potatoes by any stretch of the imagination, but we like to have a working television. Obviously it was time to start looking for a new one. 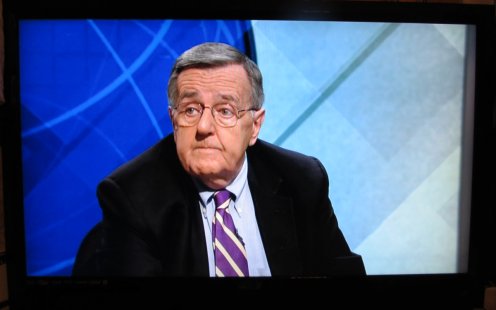 We eventually decided on a 47-inch flat screen high definition monstrosity with an amazing quality of picture and surround sound. It fits our very large living room, and a one-day sale and an extra discount made the price very reasonable. (We paid cash, of course.)

For the next almost seven months we watched the television for perhaps an average of an hour each night. Then one night the television wouldn’t turn on and stayed frozen on the opening screen. None of the recommended factory reset procedures made any difference.

Because the television was so new, it was still under warranty… and… because it was a national brand from a very well-known and respected company, we expected nothing more than the hassle of replacing a defective product. We were in for a huge surprise.

The manager of the store said that the store could do nothing to help us because the television was still under the manufacturer’s warranty and that any repairs or returns would have to be handled by the manufacturer.

Someone from the manufacturer named Mike said that our problem was a known issue, and that because our television was still covered by warranty it would be replaced with a new one. No problem… all they needed was a return authorization number, which another department in the company would supply. Mike willingly volunteered his complete name, his badge number, and the person to speak to in the other department.

There was no way that we were going to agree to having our almost new television replaced with someone else’s refurbished model at our expense… or even at no cost to us. We wanted OUR television repaired.

I don’t even remember how many telephone calls my husband and I made to the manufacturer after that, but it was at least a dozen, most of them to supervisors and people “with authority,” and we were getting nowhere. The store we had bought our television from wouldn’t help us because the television was still under warranty, and the manufacturer would only send someone to pick up our almost new television and drop off a refurbished one. They refused to repair OUR television and return it to us.

At that point we began to think that it would be easier to just bypass the store and the manufacturer and that it would be worth the expense to have the television repaired locally. We made more telephone calls, and that is when we discovered… that at least in this area… no one repairs televisions any more! Each store will service only the televisions they sell, and all of the stores send the televisions to the same repair center located nearly a hundred miles from here. There really are no repair shops nearer than that. Unbelievable, isn’t it?

I don’t give up easily, and I began to wonder if we could fix the television ourselves. I had read a lot of conversations on television repair forums that discussed the frozen startup screen problem, and the consensus seemed to be that the problem was blown capacitors on the power board. I searched for replacement power boards for our make and model of TV and found an online television repair shop that sold new replacement parts that had been reclaimed from televisions broken during shipment. I made one more telephone call and spoke to a technician from this company, explained the frozen screen, and asked if he thought a defective power board was the problem. 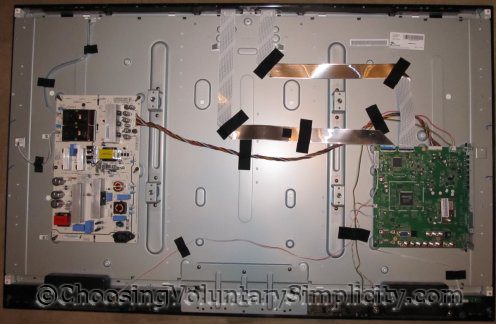 Immediately he said no, he was 100% certain that the problem was the main board… that a defective power board would be causing a different set of problems than those we were experiencing. I asked if he thought replacing the main board was something we could do ourselves, and he assured me that we would have no problems. We had a choice of sending our main board to be repaired, or buying a new main board (from a new but broken television) and returning our main board for a store credit. The cost of the new board was only a fraction of what we had expected we would have to pay. Shipping was free and if the replacement board didn’t solve the problem, we could return it for a full refund. Finally we had found someone who knew what he was talking about. It was a most refreshing change. 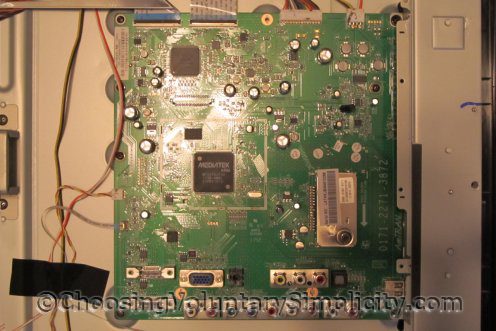 The defective main board we replaced

This has to be one of the most empowering do it yourself projects we have ever done. We ordered the new main board on a Friday and UPS delivered it the next Monday at about five-thirty in the afternoon. It took about a half hour total to take the back off the television, disconnect and remove the old main board, and replace it with the new main board. The longest part of the process was taking out and replacing all the little screws in the back of the television.

It was almost anticlimactic to turn the television on and see that it was working perfectly again… and Mark Shields never looked so good!

I am impressed. It took courage to attempt to repair something as complicated as a television and congratulations on your success. I find it encouraging that you are able to successfully complete so many DIY projects that I would find daunting. I am starting small but your blog has already encouraged me to attempt projects I never would have attempted before.

We had an almost identical experience but with a less happy ending. TV less than a year old – frozen start screen. The manufacturer dropped off a refurbished model – same make – same type – but wouldn’t repair ours. We had to pay $86.26 for the service call and they insisted on the service call – wouldn’t let us take the TV back to the store. I wish I would have thought perhaps we could fix it. This is a great post. Thanks.

Stories like this are exactly why I am still watching television on my 1990 20″ TV! It still works great and I’m afraid of the hassles and problems associated with a new flat screen. I had to learn to repair and replace computer parts to keep those dumb things running, but I draw the line at repairing a TV! Kudos to you for your ingenuity!

Your “stick-to-it” attitude is an inspiration to me. I have been laid up with a bad back this week and couldn’t get done what needed to be done, namely Spring cleaning. I am 74 and realize I must slow down a bit. Today I stuck to my guns and began doing just a bit, resting, and doing a bit more. And my windows never looked better!
I don’t have to tell you how good it feels to see what can be accomplished if you just persist. I am thinking of your tree root dug up, your pile of logs sawn and put away for Winter and the pond you and hubby dug by yourselves.
Thank you. I may not write very often but I read your blog almost every day. You bring great joy.

Congrats on fixing your TV yourself! I love to read stories of people doing things themselves. It’s how both my husband and I were raised and how we like to do things, if we can.

Wonderful story. I am a DIY type and occasionally so is my husband. He is an electrician and has that sort of mechanical mind that can solve most problems, but I do not. I need to do quite a bit of research before I take on most tasks. You are quite right about that lovely feeling of accomplishment and empowerment that comes from finally doing it yourself=)