Home » Doing It Ourselves » Digging Another Pond By Hand

And here is the beginning of our second pond… like the first pond, we are digging this one entirely by hand. Luckily, there are several natural springs that will be the pond’s water supply, so we will not need a pump or a filter. This second pond will eventually be the same size as the first, roughly eighteen by twenty feet, and probably nearly six feet deep. 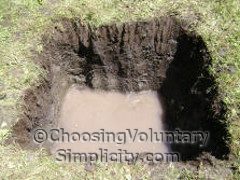 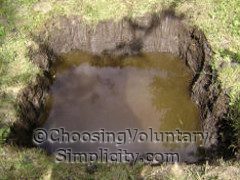 This is the first test hole. After the first shovelful of soil was removed, we could see several little springs with water coming in at a constant trickle, but sometimes these small springs stop after a few minutes, so we stopped the digging after the hole was roughly four foot square and left the test hole overnight to see if the springs would continue to flow. As you can see in the photograph on the right, by the next morning the test hole was nearly full of cloudy water.

As the hole grew, the digging exposed more and more of these small springs. More water continued to flow in and digging became very difficult because the “diggers” could not see where they were digging. In this photograph, the water is thigh high and even cloudier because there is so much clay in this soil. Most of the clay will eventually “settle” and the water will become clear, but we want to remove as much of the clay as we can because too much will clog the little springs and seal off the water supply.

Someone got the brilliant idea of leaving the first hole and digging a second unconnected hole… keeping the two holes separated temporarily by a wall of soil. The hope was that the second hole could be dug faster than the water could come in. Unfortunately, that hope soon drowned as even more forceful springs were uncovered in the new hole. Soon water was thigh deep in the new hole, too, and we had to set up a pump and hose to pump the water out as the digging continued. 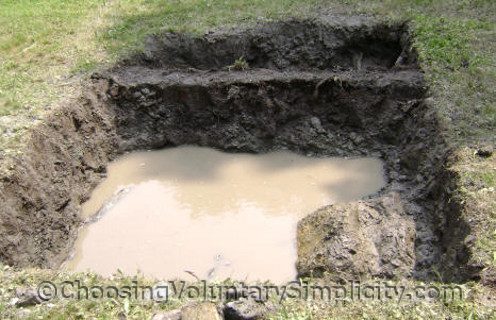 Digging this portion of the larger hole resulted in the discovery of several massive rocks about a foot below the surface. Some were a manageable size and could be winched out of the hole, but a couple, like the one shown here, are too large and heavy to move and will have to remain where they are. Part of the rocks extend past the edge of the pond under the soil, and they are so well anchored my “diggers” were able to dig under them, thus creating a nice area of retreat for anything that will be living in the pond. 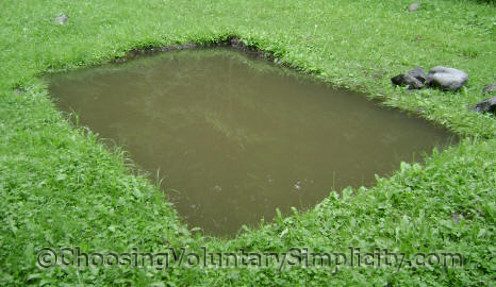 The hole is now roughly the right size, although we still want to change the rectangle shape into an oval, make the sides gently sloping instead of straight, and make the pond about a foot deeper (and mow down some of that grass!)… although we will have to pump out the water before any more digging can be done. This photograph shows the water level slightly higher than it usually is because we had just had a very heavy rain, but as you can see, we have no shortage of water, although it is still very cloudy because of the clay. With our first pond, it took several months for the clay particles to settle and the water to clear completely, so we’re not expecting much from this pond until next year, when it has had enough time to set up its own ecosystem.

Already there are frogs living in the water… they obviously don’t know the pond isn’t ready yet!

Autumn is the Eternal Corrective

Wow, very nice!
How long did it take you to dig this pond?
That should have been about 80 metric tons of earth…

oh my goodness, i can’t get over all that water (and no wonder on the lush green grass)!!!! we would have the opposite problem trying to dig a big hole here in canberra – it would be sooooo hard due to lack of water!! looks gorgeous

Looks good! I have dug a few ponds by hand at previous locations. I will soon be digging another one here and it will probably be done as it is filling up, as your’s was. That does make it harder, unfortunately.

Very interesting process, thanks for sharing. I can’t wait to see the finished product.