I love this old house. It was for sale, and for a while we were even thinking (half seriously) about buying it and making it beautiful again… I took this picture then. Even in its rundown state, the house had potential, but the location was bad. The house used to be part of a farm, with several barns and acres of fields, but everything except the house had been sold, and a very busy highway had been constructed too close to the house. The noise from the constant stream of big trucks going past was overwhelming.

I have often wondered what had happened to the house. We haven’t driven past it for a while, so it was a surprise to see that the house is gone… and not a trace of it is left. I hope someone took the time to tear it down with the intention of rebuilding it somewhere else, or that the entire house was moved to another location and someone is making it a home again. 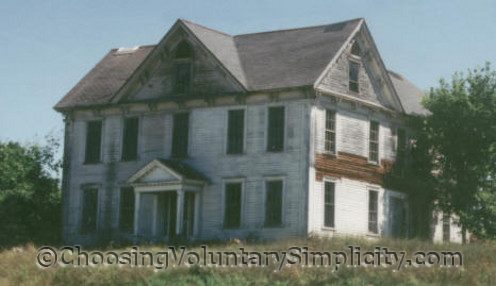 Looks like a pretty neat place. Let’s just hope something even better will take its place.

That house reminds me of the one I grew up in. I always thought our house had character and I can see that the one in the picture did too. Nice post. Btw, I really like your blog and have become a regular reader.

I love old houses!! I can see that U do too. Too bad the hiway had to go there. Your blog is great. Thanks!!

This reminds me of “The Little House” by Virginia Lee Burton – a favorite book when I was a child. My family renovated a house very similar to this one (and in a similar state of disrepair) in the 90’s. My parents have a passion for buying old houses in very bad shape and making them beautiful again. I like to think that someone did the same for this house somewhere else… :)

When you get old and you are giving directions to someplace, you’ll still be telling people to turn left where that old house used to be…

This is the kind of house where people were born and people died. It was more than a house. It was a home. Somewhere there may be old snapshots in an album of a family out on the lawn in front or working in the fields and barns. I bet they had chickens and cows and a field of corn and one of hay. I can almost smell the apple pie cooling in a windowsill and see an elderly woman sitting in a rocking chair in “her” kitchen, a big black stove and a kitten curled up in a sunspot. There is a well out back and the water is clear and cold and in the spring the “peepers” sing their songs of love.

The winters are long and white and windy but after chores are done the family sits around the hearth, maybe reading the Bible or singing the old carols at Christmas. Many seasons come and go and things change. But nothing will ever take away the memories of living in a house like this. A home like this.

I’m going to go and get out the old family albums and visit with my folks for awhile.

Jo, that’s exactly the way I always felt about that old house. It was in such a terrible location, I knew I could never live there, but for several years I kept trying to think of some way we could bring it back to life. It just seemed to be such a homey place. I hope someone rebuilt it in a better location.

This story makes me think of this quote from somewhere: “It takes a lot of living to make a house a home.” We don’t buy homes, we make homes by living our lives in them.