Home » Doing It Ourselves » Our Experimental 100% Leaf Mold Gardens

It seems that every year we wish we had more garden space. There are a lot of areas in our meadow that get almost all-day sun and would make perfect gardens, except the soil is too wet, too full of clay, and too full of rocks. We have been working on digging rocks and amending the soil for years and years, but at best it’s a slow process. We need more planting space now.

My husband makes huge amounts of leaf mold every year, and we find ourselves in the odd situation of having more rich leaf mold than usable rock-free soil. Since we age our leaf mold until it is very fine and looks like dark rich soil, it was a natural progression of thoughts to wonder if we could plant crops in the 100% leaf mold. I thought some of the gardening experts might know, but after numerous telephone calls and Internet searches, I couldn’t find anything supportive. Perhaps our problem was that the people giving the advice couldn’t conceive of anyone having more leaf mold than soil… but I could not find anyone who would support our idea of using 100% leaf mold as a primary planting material.

We decided that we would try it anyway. We chose a nice sunny area in one side of the meadow and marked out two planting spaces, each roughly six feet wide and sixteen feet long. Next we cut out the squares of turf, which we removed and later used as a base for grassing over another area. We removed the large rocks that were under the turf and worked up the wet clay “soil” as best we could. Then we laid down about an eight-inch thick layer of leaf mold over the entire planting area. We worked some composted manure into the leaf mold in the same proportions we would use if we had been working with soil, watered the area thoroughly, and left it alone for about a week.

We planted cucumbers in one garden and a mix of winter and summer squash in the second one. Next time we will leave a bigger space between the “gardens”… last year we left twice the width of the lawn mower because we intended to continue mowing the grass around the gardens. However, even though we had planted only a few plants down the center of each garden space, once the plants started growing, they spread way beyond our expectations. Mowing that between garden area quickly became impossible, which meant we were unable to keep the meadow looking as neatly mowed as usual. Another time we will also not use such a thick layer of leaf mold. Our original concern was that the leaf mold would wick up too much moisture from the too wet soil, and we thought a full eight inches of leaf mold would keep the garden moist but not wet. As it turned out, the deeper leaf mold could have caused a problem with too little moisture. We ended up spending lots and lots of hours carrying buckets of water to ensure that the cucumbers and squash got all the water they needed. 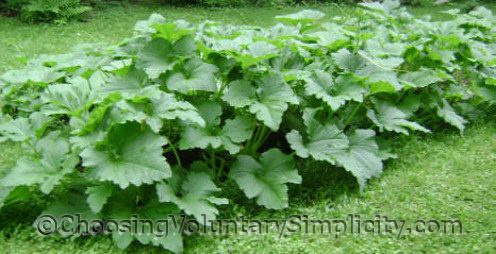 Other than these two minor issues, we were extremely pleased with how amazingly well both the cucumbers and squash grew and produced in their 100% leaf mold “soil.” The plants were lush and strong and covered with blossoms and fruit all summer long. The yields were nothing short of amazing.

We’re already making plans for this coming summer and for more leaf mold gardens in the meadow… and also in some of the dryer areas of our land where the sun is great but the soil is just too rocky for planting. We’re thinking a simple no-bucket irrigation system would be a nice idea too! :o)

There’s No Meat in Our Favorite Meatballs

The Easiest Boiled Frosting Ever

This is absolutely stunning, and an ingenious way to acquire more “soil” for planting. I’m off to see how you make your leaf mold now~

What an interesting idea. Those plants look wonderful.

Way to think outside of the box — or in this case outside of the garden soil. I like how you gave the idea some thought and then decided to try it. I’m trying to be a little bolder and more experimental in my life too and I find a lot of inspiration here at this blog. Thank you so much.

I just came across your website today and I’m sharing it with everyone I know! I love what you are doing and saying. Thank you!

I have been doing “Mittleider Growbox” gardening for years. His method is to build growboxes 18″ wide and 30′ long, 8″ deep, and fill them with artificial ‘soil’ consisting of sand, sawdust, peatmoss or other ingredients that are easily or naturally available in your area. Your leaf mold would fit in perfectly! (I never heard of leaf mold – I’ll have to read more about it!)

Plants don’t need any more than 18″ width and 8″ deep, if you fertilize regularly. The Mittleider method uses a broad spectrum fertilizer, not just the typical 3-ingredient ones. By making it the garden areas only 18″ wide, you can reach in to pick produce without having to stand on the growing soil, compacting it and bringing weeds in. Plus 18″ wide is very easy to water and uses little water.

Alan @ it's not work it's gardening

I wonder how many of the roots made it down into the clay soil… did you check? I suspect they did, because that 8″ of leaf mold would be down to just a couple of inches by the end of the summer I’d think.

Alan, the leaf mold we used was a very fine texture and it looked just like black soil, and the packed eight inches we put on the garden in early summer was still eight inches by the end of the summer. There might have been some slight packing down, but it was still a high mound of leaf mold. When we pulled out the plant roots in the fall, it was obvious that they had been growing entirely in the leaf mold. We had put a layer of pebbles on the clay soil underneath and it was undisturbed. I don’t think we would have gotten the same results with “new” leaf mold or if the leaf mold had been of a coarser texture.

Leaf mold is great stuff! I put leaves in garbage bags in the fall, added some water and seal them up. They stayed piled up until spring. This makes great leaf mold for the garden.

Cucurbits love very rich soil. Leaf mold and manure is a good medium for them. Squash will grow in a manure pile. It might be too rich for a few other things.

In my country (the Netherlands) gardeners tend to use yheir not ready for use compostheaps to grow melons (or decorative and edible pumpkins). The sloping sides asure more sun and good drainage, so maybe those stones you heaved so painstakingly out of the soil and wheelbarrowed to heaps in the meadows can be a base for melons etc. growing mounts with a top”soil” of leafmould? Maybe you could do a blog on beans, peas (the to dry kinds) and lentils and asking for an organic homegrower in your space of the world willing to grow some extra to sell to you. I found this autumn a grower at 29 miles from home who is growing some old local variety of beans and peas for the love of it and now an organic growers association is selling them in small quantities, but trying to increase the number of growers. Alas, my garden does noy exist, it is of stampsize, but I will grow a few peas and beand in pots, because they have loevly flowers and maybe will yield a pod or two.

I, too, am wondering how viable leaf mold is for direct planting. I have 2 large, open compost bins, one is simply sitting and composting for a year and the other is being actively added to. We take from one and add to the other, switching each season. The “compost” I’ve been taking and using for my raised beds, flower pots, etc. seems to be nothing more than leaf mold. Other than kitchen scraps, I put some grass clippings and other greenery that I weed from the gardens into the compost bins. I have a strong suspicion that animals eat my food scraps before they become compost. I don’t have a source of manure. (Oh! how I wish!) The plants in my pots are living but aren’t exactly thriving. I’m thinking it’s the addition of manure that has helped your plants to do so well.

Great experiment! Have you tried mulching with woodchips to help with water retention? I experimented with the Back to Eden wood chip method this year – it really improved my garden, so I’ve added more wood chip garden areas to plant in in the spring. I use ramial (lots of leaves and twigs) wood chips.

Thank you for posting your experiment. I have two pits of leaf mold created over the years, and was tempted to sow red clover and see if it would germinate. Now, since my property is sand and clay, time to lay out plots and make something productive out of it.

Thank you for this. I’ve been trying to figure out the same thing and couldn’t find an answer until coming across your post. I’m building a hugulkultur bed, and I didn’t want to spend a ton on soil. So I used a combo of leaf compost (free from our local center) and horse manure compost to serve as my growing medium. I also put an inch layer of wood chip mulch (also free from our local center) over this, to help build the “soil” over the season.

I have a decent size yard with several large trees. Leaves fall year round due to the warm climate. I accidentally started making leaf mould last year just trying to fill in some ruts till i got a load of dirt. This year i have quite an abundance that i plan to use for my garden. I’m glad i found this article and that someone has tried it before.

Thank you so much for this article! I have been wondering and looking forever for an answer to this question. Since I had a bunch of leaf mold but no money for soil, since ours in Florida is practically sand. Now I feel confident that I can still grow a garden on a budget. Thank you greatly!