When I was a very young child, my parents “sugared” every spring. We spent many long hours wading through the deep snow to gather the sap, and even more long hours huddled around the fire waiting while the sap boiled. It was a lot of work… thirty-five to forty gallons of sap boils down to make just one gallon of syrup… but it was a lot of fun, too. Often we cooked our supper on the fire or toasted marshmallows while my parents kept an eye on the syrup’s progress. All these years later, even a whiff of a certain type of wood smoke will still bring back happy memories of those times.

Nowadays most of the maple trees around here (except ours) are tapped by one neighbor who sells huge quantities of maple syrup. This man automates the process and uses a network of blue plastic tubing that he leaves in the trees year round.

My father would definitely not approve. He tapped the trees with a hand rotary drill, inserted galvanized metal sap spouts with a hanging hook, and hung metal buckets with a flat cover to keep bugs and rainwater out of the sap… and he ALWAYS removed the spouts after the sap run was over so the trees could heal. Each year he was careful to make the tap holes in different areas of the tree, keeping each tap hole several inches away from any previous holes… and (unlike this neighbor) my father would only tap trees that were at least twelve inches in diameter at chest level. I remember him telling me that a tree of this size could be tapped for one bucket… a larger sixteen-inch diameter tree could be tapped for two buckets… and a tree over twenty-two inches in diameter at chest level could be tapped for three buckets without damaging the tree. 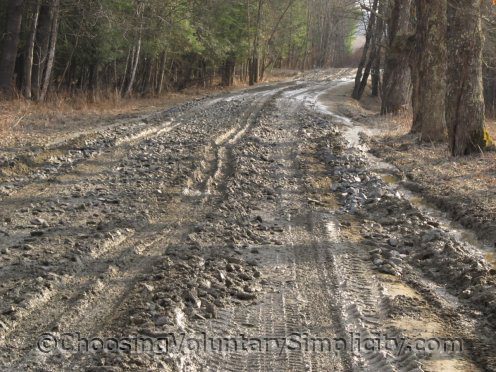 When temperatures rise above freezing during the day and drop down below
freezing at night, this is sugaring weather (and the start of mud season)!

There is an old saying that the sweetest syrup comes from sap collected from trees with full tops and branches close to the ground. Actually, any maple tree can produce sap with some sugar content that could theoretically be boiled down into a syrup, but real maple syrup comes from the hard or sugar maple. Before the sap can run, the weather must provide night temperatures below freezing and daytime temperatures above freezing. Most years there will be only five or six good runs of sap during about a six week period of time.

Fresh sap is clear, looks like water, and tastes sweet. During a good season, as much as fifteen to twenty-five gallons of sap can be taken from a good-sized tree. Sugaring almost always ends abruptly as the weather becomes warmer, the sap flow decreases, and the sap loses its sweetness.

My father boiled the sap in a huge shallow metal sugaring pan supported on a metal grid suspended over a simple fire pit structure that he had made with large rocks. Many nights we would still be outside long after dark waiting for the sap to boil down to the right stage. This was probably the most important part of the sugaring process. If maple syrup isn’t boiled down long enough, the sugar content will be too low and the syrup may mold or ferment in storage. If the syrup is boiled for too long, it becomes too thick, the sugar content will be too high, and the syrup will crystallize in the jar after it cools. Some people used a thermometer to get it right, but my parents relied on the old method of testing the syrup’s density. My mother would slowly pour a large spoonful of the boiling syrup back into the pan. At a certain point the syrup would literally “sheet” off the spoon and they would know that the syrup was ready.

The sap must be running well today because the neighbor has been constantly driving past our house with his huge tanks of collected sap. His more efficient methods mean that he can make more syrup with less effort… but the old, slower way had charm and allowed a oneness with nature that this neighbor will never know.

Progress, I suppose… but I think an intangible something has been lost.

I agree with you that something is lost there. Any time someone exploits a resource for more than what they and a few others close to them need it turns into a mine, done for profit rather than sustenance. We need to re-localize our resources.

We’re in the midst of collecting our sap here in MI, too. Not so picturesque for us…black plastic buckets hang on our trees. A couple miles away, though, a farmer has the metal buckets hanging on some huge old trees. It makes me smile whenever I drive by and see it.

I don’t even like maple syrup (my family does)but, I like sugar season because it’s a sure sign of spring. It’s always a race against the weather-will we get a good amount of sap before the weather turns warm, the trees bud and the sap turns bitter? It’s also kind of a consolation prize for putting up with mud season, right? ;-)

Your topic today makes me homesick… I remember many, many, many years ago waiting for sugar season. It not only was a sign of spring it also meant we could have a sugar on snow party, providing there was a late snowfall. Also reminds me of the year my little brother decided to make maple syrup in the house… the kitchen wallpaper all came loose from all the steam! Thanks for sharing.

Interesting topic. Excellent post. I am an editor, and if you don’t already, I would like to encourage you to write professionally. You have a genuine talent.

Wow! I didn’t know that it took so much sap to make the syrup. No wonder it is so expensive! I agree with the editor, you are a great writer. I love your blog.

this reminds me of something I learned about morel mushrooms becoming more rare. Today’s mushroom pickers often use plastic bags to gather the mushrooms in. Unlike the baskets or string bags used in olden days, the plastic does not allow the picked mushrooms to spread their spores as the picker moves along. Resulting in fewer mushrooms being seeded, fewer mushrooms the next year. *sigh*

Oh Shirley, I am so envious of your wonderful memories. Living my entire 40 years in suburbia, we never had the chance to tap trees for sap. The closest we ever came was reading Little House in the Big Woods. The sugaring off dance is still my favorite part of that story. My ten year old son even likes that part and I find that amazing seeing as he’s usually only interested in video games and anything with skulls printed on it. Thank you again and again for bringing me back to simpler times and practical ways with every post you publish if only in a vicarious way.

Loved this story. I can’t agree with you more that getting back to a more simplified life is so important. I’m seeing more people really focusing on creating simpler lives with the down turn in the economy. It’s given all of us time to reflect and really decide what we want in life and what’s most important. Maybe one day we can get back the intangible something we lost. I know for myself and my clients when things are simpler we get more connected to that intangible something. Thanks.

Every time I hear, for the sake of progress, I cringe a bit more. I live in PA, where the gas boom has ignited so much controversy. The natural surroundings of the place I call home, are now disappearing due to progress.

I am not sure if cutting down all those trees, and leveling fields that used to be grazing lands for cattle and sheep, in order to install a cement pad for gas well to come, is truly what everyone envisioned.

I agree completely with you. We have lost a great deal because of progress, and we will continue to loose more unless we shift our mindset and begin to preserve.

Thank you so much for sharing your story and for your willingness to write about it.

Hi Shirley,
I happened on your blog a good hour ago, and love most of what you write, but especially love your sentiment here (even though, being in Melbourne, Australia, maple tapping was never an option of my childhood!).
Our shift to simpler living came about following our family’s loss of everything but our lives and one teddy bear in an unprecedented wildfire three years ago. We were almost killed, and walked from our burning home into a world of dead and dying animals, burning homes and some truly tragic deaths, leaving our friends’ children orphaned and others widowed. 173 souls perished that day, and many people continue to struggle badly with their loss.
My husband chucked his important job and we made a committment to try to live more kindly. We are motivated by a need to minimise our personal contribution to the damage modern society inflicts on the planet and its inhabitants. As it turns out, life is more frugal, peaceful and our beautiful teenaged daughters are proud of our “indie” (alternative-ish) lifestyle.
I love that you and we probably come from different priorities or motivations — for us climate change and animal welfare issues are way up there — but simple living takes all involved to a kinder place away from the mad rat race, even though it can still entail some hard work!
Well done. I agree you should consider publishing.
Eeep that was a long comment…
Angie.

And it won’t taste the same.