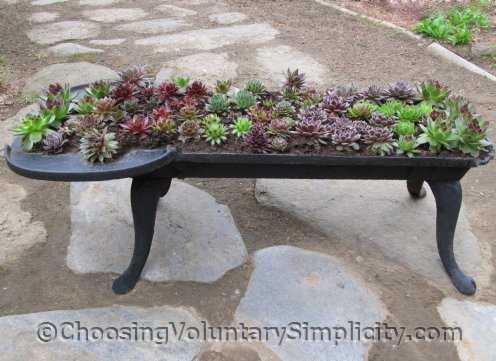 What do you think of my new planter? It is made of cast iron and in its previous life I think it must have been the base of a small wood stove.

I found it last fall almost buried in the soil near where there used to be an old mill, and my first thought when I saw the short curved legs and the interesting shape was what an unusual sempervivum planter it would make. We did some digging and saw it was all in one piece… my husband sanded it off and drilled several drainage holes in the bottom of the tray. I spray painted it a matte black and yesterday I filled it with some of the smaller sempervivums. Now it needs a steady rain to wash off some of the soil that doesn’t want to come off the edges of the cast iron, but I am pleased with how my new little planter looks.

I’m hoping to transfer most of my sempervivums to planters this year. We’ve had so many problems with deer eating the sempervivums during the winter months, and it would just be easier if I could move them out of their reach.

My plan is to overwinter planters of sempervivums in our barn and bring them out each spring. I did this with three planters this past winter… I moved them to the barn before the first heavy snow and just left them there. This spring the sempervivums in the planters were obviously a step ahead of the sempervivums that spent the winter outside, so it seems like a good solution for all of us.

We found something else in the same area of the old mill that is also made of cast iron and looks somewhat like a grate, but it also has legs. I think it might have potential… turning whatever this was into another planter will be one of my next projects!

What an awesome idea! I’ve already left my dad a text for him to call me back. He is a pack rat and has lots of interesting stuff. I would be putting sedum in mine. I have just the spot for it. If Dad doesn’t have something I’ll keep trying. Wonderful blog by the way.

My Dad had a blacksmith forge that he converted to a planter years ago. Later on they mounted a blacksmith blower on it and the mailbox. We called it the horse. It was beautiful each year with petunias or portulaca in it. The portulaca worked especially well since it tended to dry out so probably the Sempervivum would have been another good plant to use. We used to have a lot of people stop and ask where the parts came from. Nothing else like it that I’ve seen :-)