My mother taught me to knit when I was around six years old. My first project was a narrow strip sewn at the ends to make a simple headband. My second project was a wider strip folded and rolled to make a pin cushion. Next I made what was called a “fairy scarf”… more straight knitting with stitches dropped and unraveled to create a lacy effect. These first projects were done in simple garter stitch, but soon I had learned how to purl and how to read and understand knitting directions, and I remember making a lot of two-needle mittens. After a while I moved on to four needles and socks and the intriguing process of “turning the heels.”

More recently I have been knitting afghans for gifts. I like to knit in the evenings, usually while we watch a movie or something on television. And I like simple patterns that I can remember after a few rows and mostly knit without having to constantly look at what I am knitting… like this “feather and fan,” which has only four rows that are repeated over and over again.

This pattern is often made in three or more panels that are sewn together, but I prefer to make this afghan as a solid piece, repeating the pattern sequence to make the afghan as wide as I want it to be. Using size 10 1/2 or size 11 circular needles and worsted weight yarn, the “feather and fan” pattern makes up quickly, even in the out-sized afghans I like to make. This pattern automatically makes a rippled edge on both ends of the afghan. 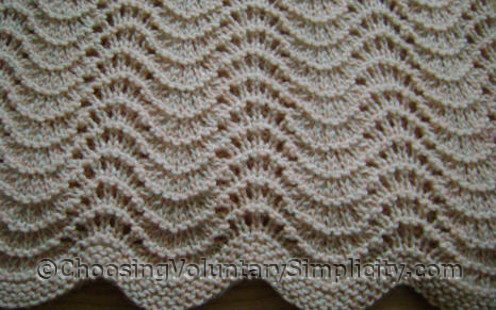 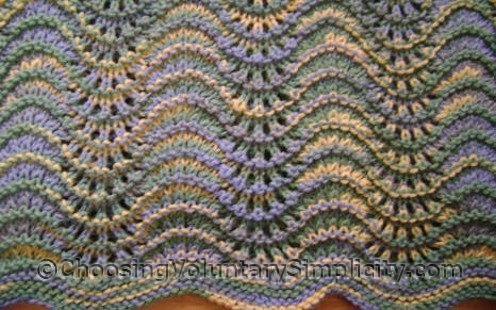 But the afghans that were the most fun to knit were the ones made with the ombre yarns… I love watching the different color patterns that develop as I knit. 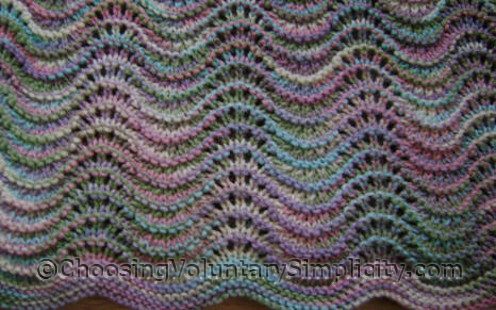 Another time I will show some of the other afghans I have knitted in other patterns… an all-over basket weave, a double cable, and a “mock cable” that actually requires more “thinking” than a regular cable does. I just finished putting a thick fringe on an afghan made in a cable stitch and with my same favorite off-white super-soft wool. That makes sixteen afghans I have knitted over the past few years. I think it is time for me to start knitting something else!

Written by Shirley Filed Under: My Creative Pursuits

And That’s a Warning We Take Very Seriously!

Wow! These are seriously beautiful. I would so love to be able to make something like this.

beautiful! you make me want to pull out my knitting needles again.

I just wanted to ask do you sell any of your work? it looked amazing here I can only imagine in person and just thought what a perfect marriage so to speak of doing what you love and then getting financial gain from it.No intent to offend I just know I would be interested in purchasing and thought I would ask.Thank you for the beautiful pictures, enjoyed reading also how your knitting came about.

Very very nice. You are a talented lady.

Those are soo pretty! I wish I could knit, but alas I know not how:( I’d really love to be able to make sweaters, especially using some of the lovely vintage patterns I have seen out there. Thanks so much for sharingâ˜º

I’ve always loved the feather and fan pattern. Lace patterns are my obsession in knitting, and I love to experiment with them, but when I want both lacy and simple, I always return to that one. It’s simple and elegant at the same time.

I just learned to knit a couple years ago and I like doing the fun stuff like entrelac and LOVE knitting socks. Your afghans are beautiful. Thank you for sharing!

Thanks everyone for the compliments!

Pam, I have not tried to sell any of my work, but thank you for the interest.

I have been looking for a feather and fan pattern to make a prayer shawl for my cousin who has been fighting non-Hodgkins Lymphoma for years. At this time, she is scheduled to have a bone marrow transplant. Thank you Shirley for sharing your beautiful pattern. God Bless.

Thank you for sharing the fan and feather pattern. I enjoyed seeing how they made up in the different color yarns. I am on break for the holidays and learning this stitch is my goal for the New Year. I do lots of knitting for church and the community and am anxious to add this to my patterns.

Beautiful, clear, exactly what I was looking for. Thanks so much!!:o)))

I adapted this for a wrap, casting on 54 stitches (18 x 3). To help keep track of the stitch sequence in the third row, I placed a marker every 18 stitches. That way, I won’t get off track and have to rip out (not my favorite thing at all!).

I have a question about how you change balls of yarn in the ombre yarn department. My grandaughter choose a yarn that is really pronounced in it’s color changes, and I’m wondering if you try to continue the color evolution by skipping to as close to the same pattern repeat as possible? In the case of this yarn, it means “wasting” alot of yarn… Can I ask for guidance, please I’ve loved the feather and fan pattern for years! In fact that’s how I found your wonderful Blog. I llok forward to more reading as soon as I get this afghan done. Thanks! Mary

Mary, I’ve always just let the color pattern make itself. To me, that is the beauty of ombre yarn.

Wow ! So beautiful. I would like to learn to knit. Are you left handed ? I saw a woman instucting on a you-tube video. How did you learn. Is there any advice you could give to those of us who want to learn and don’t have any idea what we are doing ? It must be so so gratifying to know you have made something so beautiful. You should be so proud ! Katie

Sorry. After reading your post again ,I realized you learned from you mom. Please disregard my question about how you learned. I think I was so mesmerized with the pictures! Ha . Katie

This is really a gorgeous cover. Most of the patterns I have seen are for crochet and I only knit. I will use this pattern to complete a cover for two of my granddaughters

Years ago I knitted a Feather and Fan afghan for a grandson and his bride, and one for a friend’s daughter. I just recently began knitting them again. I’d forgotten how relaxing the pattern is to knit, and how beautiful the finished product is. As soon as I finished the most recent one, I immediately cast on for another. It’s such a nice surprise to find someone else who enjoys knitting these afghans. When I told some of my knitting friends that I was going to knit an afghan, they all agreed that I was crazy.
I like knitting them from an off-white yarn.

I have knitted four of the fan feather
I HAVE KNITTED and crocheted for a long time
It has been. Relaxing to say the least.I have crocheted over 40 and knitted over30. Sometimes I will use the pattern from a sweater . And I have sold a few. That takes the fun out of it though. So who says it’s for women only…I am now 70 and plan on doing this until I have to stop
Thanx pals.

I agree with you. This is the most beautiful and easiest of patterns ever.