Home » Simply Personal » It’s a Blizzard Out There

Until last night we had less than six inches of snow on the ground. There had been only two or three smallish snowstorms so far this winter, and some of the snow from the previous storms had melted last week when the temperatures were in the 40’s. This new snowstorm was supposed to start around 8 p.m. last night. We would, the weather forecasters predicted, end up with a total snowfall of possibly close to twelve inches by the time the snow stopped late tonight. 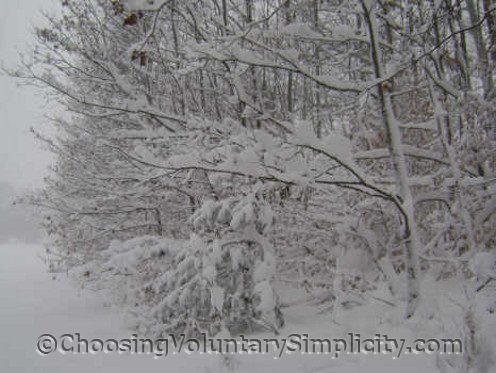 We woke up this morning to a world of white. The snow was coming down thick and fast and it was difficult to see anything through the falling snow. Opening the back door took a while because the new snow that had fallen on our porch overnight was more than twenty-six inches deep. Obviously the weather forecasters had greatly underestimated the severity of this storm in our area. 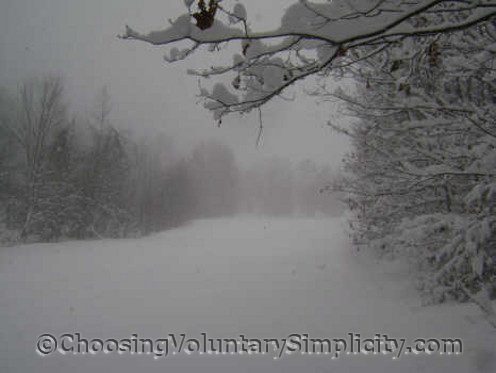 It is still snowing heavily, there is a strong wind, and the temperatures are dropping. Our severe winter storm has turned into a blizzard. The forecasters warn that winds this afternoon will be in excess of thirty-five miles per hour. Wind chill temperatures are expected to be at least twenty-five degrees below zero. 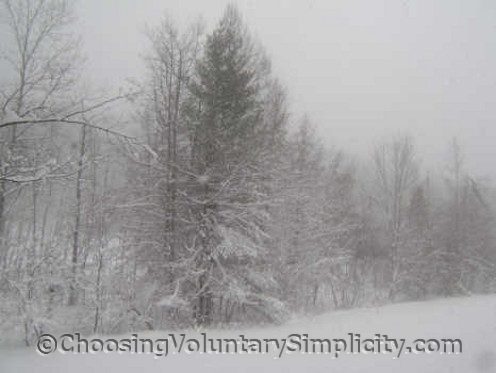 The snow that was shoveled today will have to be shoveled away again tomorrow because the wind is blowing so hard and the snow is drifting. Just a few minutes ago the weather service extended the wind chill and hypothermia warnings through noon tomorrow… and it has just snowed another two inches in less than the last thirty minutes. 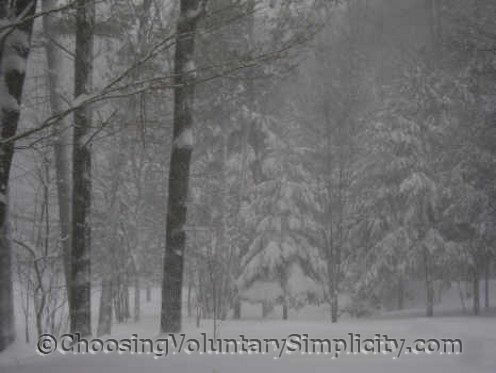 Don’t you wish you were here?

My One Piece Long-Handled Spoons

Laryssa @Heaven In The Home

Actually, yes. I grew up in New England and learned to hate snow because of the work involved (shoveling, driving, bundling up, etc).

But, after 26 years in the desert southwest, your pictures are so compelling that I do miss the day or two of a major storm. The absolute quiet, the pure whiteness of the world, and the neighbor-helping-neighbor attitude are things I miss…as long as I could drop in and drop out after 48 hours!

Down here in coastal Maine we got hit with the same storm. I have to say that I love a snowy winter. My husband is 75 so he got a snowblower for the driveway. I still shovel off a 12 foot circle under the feeders and enjoy seeing the birds come ant eat their fill and drink nice fresh water (very important) out of our heated bird bath. Sometimes the rim of the birdbath will be covered with mourning doves. They remind me of a bunch of old ladies sitting around gossiping over a cup of tea! And then our flock (12-15) of bluejays come and scatter them. I love those sassy bullies. Nothing ever seems to get in their way. Except the squirrels. One of the funniest things is to see a playful squirrel, tail straight up, come charging through a flock of peaceful doves, scattering them to the four winds. No one is hurt but a few tailfeathers get bent out of shape. LOL.
Yes, I love the winter. But then, at my age (not tellin’) all the days, in any season, are a wonderful gift and I thank God for them.

Yes.. I do wish I was there! We miss the full seasons and our Daughter and her Hubby and their 2 precious kids go and find the snow each December! Then they head back to Florida and the Gulf where we all live. It is funny how we sometimes wish we were “there” then the folks that are “there” wish they were “here”. It gets rather cold here in the panhandle but we have yet in 10 years to have even a flake! Wishing is a good thing to do.

No mam’ I live in lower Ala. about 6 miles no. of the gulf
coast and I got cold looking at your fantastic pictures.
Stay warm.