Home » Voluntary Simplicity » Visual Proof That Nothing Is Impossible

Visual Proof That Nothing Is Impossible

My husband was digging under yet another enormous tree stump and cutting roots. I was pulling out roots as he cut them, but one smallish root seemed to be unusually heavy and I was finding it very difficult to pull.

He did some more digging and I did some more pulling, and then we found out why we were having so much trouble. We were trying to pull… not a root… but a rock. Somehow as the years had passed, this small root had managed to tunnel right through a very solid rock.

We couldn’t have asked for better visual proof (and just when we needed it) that with time and perseverance, nothing is impossible! 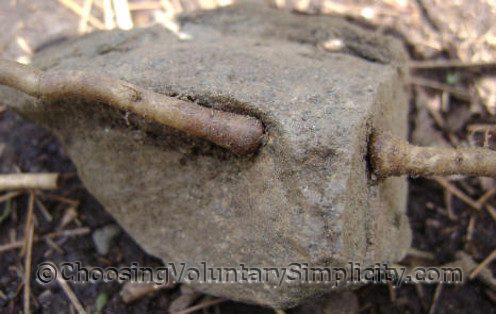 Cool picture! That’s one of those I wouldn’t believe it if I didn’t see it shots. Great blog. I love it.

Wow — an apt message at so many levels!!!! Exactly what I need right now! Thank you very, very much!

This is exactly the message I needed! I am stripping wallpaper in a 20 by 25 room. At my age, my knees have just about given out and it is very slow going. All those trips up and down a ladder!
Thank you, Shirley, for being the messenger. Everything IS possible.

Amazing photo and a startling reminder that perseverance can produce amazing results. I have to echo the sentiment in the other comments, I’m in a difficult situation and I needed this reminder right now. You have my heartfelt thanks for making me stop and evaluate my situation.

Just like the little engine that could, all those years that little root just kept chanting, “i think i can, i think i can” — and he did.

Can I find a new job? Can a root grow through a rock? Great visual for me — thanks!

Like KL, that’s just the reminder I needed that with perseverance anything is possible. So glad I found it, as life is a bit troubled right now.