Home » Simply Personal » And Sure Enough, It Was

And Sure Enough, It Was

My husband and I were in the kitchen one afternoon when he suddenly looked past me out the window and said something in an odd surprised voice. 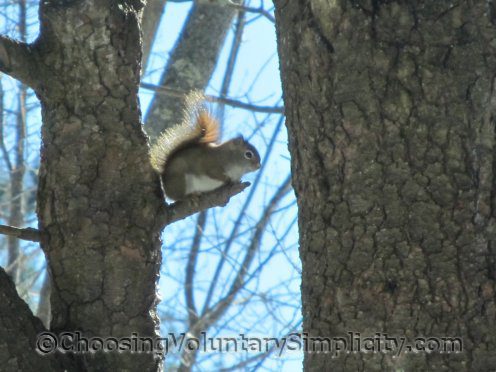 I was standing right beside him, but I was sure he couldn’t have said what I thought I had heard. When I asked him what he had said, he said the same thing again… “My underwear is going up the tree!” 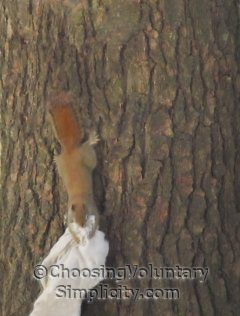 And sure enough, it was.

A small red squirrel was laboriously dragging an easily recognizable piece of fabric up the tree… a fabric with tiny pink hearts scattered over a paler pink background that started life as a pair of boxer shorts my husband had received as a gag gift several years ago. At some point I had ripped out the seams and elastic and condemned it to the rag bag. Apparently my husband had used the rag for an outdoor project and left it in the shed… and the squirrel wanted it as a soft addition to his nest.

It’s up there in the nest now… many, many feet up in a tall pine tree.

If you know what you’re looking for and you look closely, you can even see the little pink hearts!

Make Your Own Soy-Free Mayonnaise

Great story. I just read this post to my wife and we’re still laughing. I can imagine your surprise hearing your husband say out of the blue that his underwear was going up a tree. Funny!

Love this!!!!! I can just imagine the pink hearts up in the nest and visitors wondering just how that happened. Keep the wonderful posts coming. I so much enjoy your writing.

I think it must be part of a Valentine project!

Hahahahahahaha….. that’s all I can say in between breaths.

LOL, thanks so much for the smiles today=)