The road crew had spent most of the afternoon going back and forth on our dirt road with the grader, several dump trucks and some huge, very impressive looking “road machines” that we have never seen being used on our roads before. Apparently the town has made some new purchases.

Basically what they were doing was scraping the road and loading dirt and stones into the trucks to be taken away. We could see they were having some difficulty filling the trucks because the blade that scraped up the dirt was wider than the body of the truck which meant the truck could only be filled if it was positioned lengthwise in front of the blade. On most roads this wouldn’t be a problem, but the road past our house is narrow and it is lined with big maple trees on both sides. Behind those trees… in front of our house and yard and running several hundred feet in both directions, there is a four foot high stone wall that has been there for at least two hundred years. Positioning the dump trucks lengthwise across the road without damaging the trees or the stone wall was going to be a tricky operation. 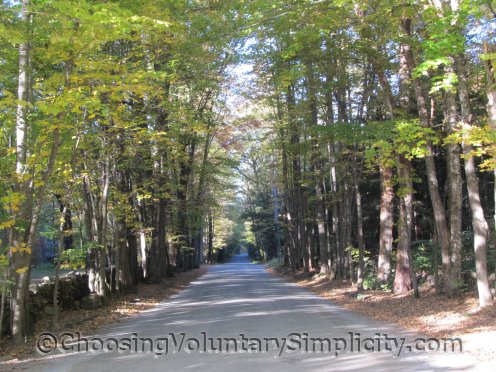 It became even trickier when the truck driving away was replaced by a different and even bigger dump truck. The driver was quite young… and friendly… he waved to us and smiled as he waited. When he began to maneuver the truck into the loading position, he had to drive ahead and back up several times to get the truck across the road lengthwise, but eventually he got the positioning exactly right.

And then for some reason he backed up a little further… just missed one of the old trees and made a direct hit with the stone wall. A truck-wide portion of the wall collapsed inward onto our front lawn.

The resulting noise was incredible. The ground shook. And suddenly the loud machinery noises stopped as the men all came to stand in front of the collapsed wall. The truck driver’s face was beet red and he kept saying “I am SO sorry” over and over again. The other men kept walking around and looking at the hole in the wall, the stones on the ground and the back of the truck like they couldn’t believe what they were seeing. Everyone was obviously very embarrassed. The man in charge apologized profusely and offered to have his men try to “put the wall to right,” although he said none of them had any idea how to build that type of wall. When we thanked him for the offer but said we could rebuild the wall ourselves, he seemed pathetically relieved that we were not angry. There was another round of apologies and the men went back to their equipment and the work started up again. The driver who had hit the wall sat in his truck looking straight ahead. The ready smile had disappeared.

Eventually that truck was filled and another truck came to take its place a few feet further up the road. This driver was obviously more experienced, and he had the truck in position lengthwise across the road very quickly. And then HE backed up a little more and the back of this truck rammed into one of the trees and then into the wall. A big branch broke off and fell onto where the wall had been. Again, the stones from a truck-sized portion of wall were now pushed onto our lawn.

All the activity stopped abruptly, and once again all the men mingled around looking at the damage. This time the man in charge was so embarrassed he could barely speak, but once again he offered to have his men try to fix the wall, and once again we said we could build it back up again ourselves. Several of the men promised that they would make sure that no more damage would be done to the trees or the wall.

They kept their word. From that point on, every time the big trucks had to back up towards our stone wall, one of the men would get between the truck and the trees and tell the driver when to stop. It took the rest of the afternoon before the men had worked their way past our yard and up into the wooded area, but there were no more accidents.

That night we got a telephone call from the road agent. He hadn’t been part of the crew but had obviously been told what had happened. He said he was calling to apologize personally and to tell us that we would be getting a new culvert for our road sometime during the next week instead of sometime during the next year as previously planned. We told him we appreciated the call… and the culvert. He said HE appreciated the way we had accepted the damage calmly and without getting angry. (Apparently none of the men had seen the steam that must have been coming out of our ears! :o))

The clean-up was incredibly hard physical work. It took most of one day to move the rocks off the lawn and for my sons to rebuild the stone wall. Over the years… out of necessity… they have become quite skilled in dry-stacking stone, and they do quality work.

So if there is a plus side to this whole unfortunate incident… it is that the rebuilt stone wall looks even better now than it did before!

Shirley, I love, love, love your web site! Your articles are so meaningful and I can tell that my reading some of the comments that I am not the only one that fills this way. I have used many of your receipts. I have from time to time wanted to email you directly but can’t find the email address if there is one. Help!

Carol, thank you! :o) There is a contact link in the bottom footer of every page of the site… or you can contact me through the “About This Blog (and About Me)” link at the bottom of every page.

You are very gracious–I’m sure you blessed the road crew by your kindness and lovely attitude.

I have to admit that I don’t always respond with kindness and calm but it’s so much nicer for all involved when we do. Good for you!

Goodness what a day. I’m so pleased it all worked out well for you and the road agent phone personally to apologise. That was a really nice gesture. Well done on responding so well to the whole situation. There are many who would yell and scream and that gets everyone precisely no where.

Once again I admire your restraint. I’m afraid I would have gotten very angry in the same situation — especially the second time even if I had been able to control my temper the first time. Good for you. You have a very interesting and inspiring blog.

I was wondering if the road in your post is the same road in the photograph. I can see the beautiful trees and stone wall I think in the background. I’m enjoying your articles. Thank-you for all the inspiration you’ve given me.

Thank you… yes, Trish, it is part of the same road. It actually looks wider in the photograph than it is, although two cars can pass if one is out to the side.

Very mature and kind outlook. I was very proud of myself for having a similar reaction to a problem with an online recently.

Very good post! Accidents do happen and no amount of ranting, frustration or anger will put things right again. You did very well to accept it so calmly!

That is a beautiful road and picture above!

I admire your attitude! A lot of people (maybe me) would fly off the handle. Also, can I borrow your sons down here in PA? I have two stone retaining walls that need to be rebuilt and I haven’t the slightest idea where to start!

No one was hurt, that’s the main thing. And a new culvert to boot! Honey always draws more bees. We live in an age where people seem to have forgotten that and kindness to others seems almost old-fashioned. Everyone is so rude.

I like the fact that you felt empathy to the young driver. He was probably very worried about his job and very embarrassed in front of the other workers as well as being very sorry for the damage.

A good lesson to teach us all. A gracious attitude gains us so much more.

This will help me a great deal especially in the future.Where we live there is all woods in the front of the house you actually drive up a hill to reach the landing in front of the house.We try to keep the woods untouched as much as possible but there are times the telephone person,Gas/Electric people or cable people go in and are not careful.I have not always acted so well but this will help me remain calm and try to mimic how you handled such accidents.Thank you !

And i am sure that they run into your type of people, well never. Kudos on keeping your cool. Like i tell people when this happens to me, “I know you didn’t get up in the morning thinking, now what can i do to make someone else’s life miserable today.” That usually makes them feel better.

And look at the bright points, the wall looks better than before, you are getting a new culvert sooner instead of later and you probably got a lot of kind words for being understanding and calm people. See it all works out in the end.

I’m enjoying your articles. Thank-you for all the inspiration you’ve given me.

I was so blessed to read this story. I am one of those people that would not have responded with kindness. I saw myself in your situation and realized (even more now) that I must make a BIG change in my attitude in life. Thank you so much. Seeing it in black and white made a HUGE impact. Now I have to work at making this very big change. Thank you SO MUCH!!!

Like I tell my Kindergartners, kindness counts! A new culvert coming your way sooner than planned…super news!