Is it worth the extra cost to buy organic produce? According to the Environmental Working Group, if you buy organic for the twelve fruits and vegetables on its 2022 Dirty Dozen list, you can greatly reduce your pesticide exposure. If you can’t buy all organic, they suggest prioritizing your purchases by buying organic from the Dirty Dozen group where it counts the most.

The EWG also lists special warnings for hot peppers because they contain trace levels of highly hazardous pesticides that are toxic to the human nervous system. People who eat a lot of hot peppers are urged to buy organic, and if they cannot buy organic… to cook the peppers because “pesticide levels typically diminish when food is cooked.”

More than ninety percent of the sampled apples, nectarines, cherries, spinach, and kale tested positive for two or more pesticide residues. Some samples of kale showed as many as eighteen different pesticides, and spinach and kale had the most pesticide residue by weight. 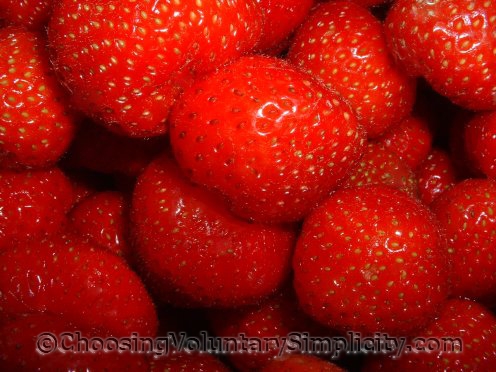 The vegetables on the “Clean 15” list rarely test for multiple pesticides, and almost seventy percent of the Clean Fifteen fruit and vegetable samples had no pesiticide residue at all. Less than five percent of the other samples tested positive for two or more pesticides.

Less than one percent of avocados and sweet corn tested showed any detectable pesticide residue.

Complete List of Fruits & Vegetables Tested for Pesticides
Produce is ranked from “worst” to “best”… the lower the number, the more pesticides in the produce.

The research used to develop these lists assumes that the produce is rinsed or peeled. Unfortunately, rinsing produce reduces but does not eliminate pesticides, and there often are many nutrients in the peel. The EWG’s suggestion is to “eat a varied diet, rinse all produce, and buy organic when possible.”

wow.. that is just so cool! for someone like me that has a hard time affording organic, but is very concerned about pesticides, a list like this is pure gold!
thank you so much…

I wish I could grow my own food but I live in a 6th floor apartment right in the city. I have tried the container gardening route and despite what the advisors say it is impossible to grow enough food in containers. I would like to eat only organic but I can’t afford to do that. Many of the items we eat the most often are on the dirty dozen list. I’m glad to know this information but I don’t know what to do with it.

It’s getting harder and harder just to eat. My little girl was diagnosed with soy allergy so I have been trying to work around that. I’m very concerned about pesticide residues and I really appreciate these lists and this information.

Obviously we can’t grow oranges or grapefruit in Maine, but I substitute rose hips (jam) for the vitamin C content. I also try to grow fresh greens in season and pick wild berries. I do not eat corn because most of it now is genetically modified and I don’t have room to grow it. We eat lots of onions and garlic, so that’s good to know onions are “safe”. Tomatoes I grow, Mortgage lifters, and cucumbers for eating and pickles. I am going to have to find a good organic potato — I could eat them three meals a day and never tire of them in any form.
You gave me a good idea. I think I will add a strawberry patch next year. I love to pick them at a farm not too far from here but they are not organic.
I still do not understand why organic produce is so much more expensive than pesticide laden food. Must be more labor intensive, I guess. But good, clean and wholesome food should be a right for all, not just for those with deep pockets.

What disturbs me the most about these lists is that the organization peeled and washed the produce before doing their pesticide tests. I always thought I was avoiding the problem by peeling and washing. I would like to buy organic produce but there is no way I could ever afford it so I guess I’ll try to avoid as many of the Dirty Dozen as I can.

ooh, I have a half-peck of non-organic peaches on the counter now! I wanted to support my local orchard, but they don’t produce anything organic and only sell a few organic foodstuffs. So, the local vs. organic conundrum continues for me! *sigh*

Thank you for the complete list! One great positive that is coming out of these types of studies being so heavily publicized is that people are becoming more and more interested and discerning about where their food comes from from how it’s grown and where it comes from to the additives in commercially packaged foods. The more people pay attention the more strides will be made. Not being able to afford or find organics easily is changing little by little with the education of consumers.

Great to see this extremely useful information, sending along to my friends.

I find it surprising that these lists are published without disclosing the fact that GMO is not taken into consideration. Commercial corn, for instance, can be grown using few pesticides if it has been genetically altered to survive a variety of attacks using methods that include producing toxins that kill pests.

Often under pressure from producers with political and financial clout, under-funded government regulatory agencies will declare a food fit for human consumption sometimes with only a year or two of research which is often sponsored by the producers themselves. It is, at best, quietly mumbled about when they discover their mistake years or decades later.