It was a most frustrating day. A really bad thunderstorm that started just after dawn and the resulting power outage got the day off to a rather unfortunate start. Then we discovered we had lost our telephone service as well, although by that time the electricity was back on (briefly) and another storm was in progress. The entire day was full of Murphy’s Law and anything that could go wrong… did.

Finally it was nearly three in the afternoon and we had somehow managed to put in a full day’s work between the storms and the telephone and power outages, and except for mailing several pieces of work-related mail, we were ready to call it a day. And then another storm came out of nowhere, and the normally short drive to the post office became somewhat of an obstacle course, with trees down, large hail pelting the car, really strong winds, and a blinding rain. About a half mile from our house a falling tree had brought down electrical lines and they hung low over the road. Local police were stopping cars at several points and not letting anyone through. Eventually, of course, the storm passed, the trees were removed, the road was reopened, and we continued on our way. 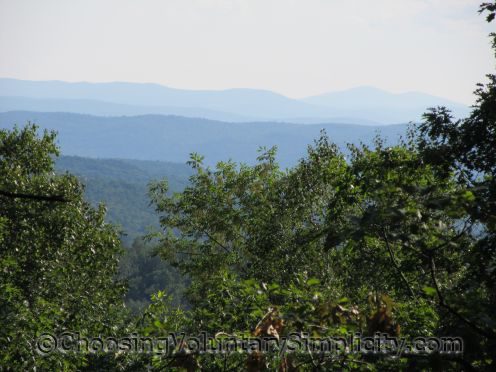 Then we discovered the local post office was closed because they too had no electricity. We were meeting deadlines and needed proof of mailing receipts dated that day. So we kept going, and after passing through three more towns with three more closed post offices, we finally reached an area that still had electricity and a post office that was open for business. A few minutes later we were on our way again, but when we got home, even though several hours had passed, our electricity was still off. The power company continued to push back their estimates of when the power would come back on, and once even predicted that the power might be off for several days. It looked like we were in for a long night.

But at least the rain had stopped, so we decided we would all take a walk. Then we fed and played with the animals, stacked some wood, and pulled some weeds in the garden. After a day full of struggling to meet business deadlines and fighting circumstances beyond our control, it felt so good to clear away all the distractions and just focus on the “now.” Life doesn’t always go smoothly, and the things that make life challenging and interesting and make you grow as a person can often be stressful and frustrating.

It’s easy to get emotionally sidetracked sometimes. Some quiet time… alone or with the people you love… allowing yourself to actually THINK and BE… there is no better stress buster than this to truly renew your spirit and give you back that sense of balance.

Micro Tom, the “Smallest Tomato Plant in the World”

Thank you. My day has been horrible and I was in a really bad mood until I read this post. You have given me the perspective I wasn’t able to find myself.

Thank you for writing this post. You’re right, it is so easy to forget what is important in the day by day hassles of life. The part where you said, allow yourself to actually think and be. I love that phrase. Thanks!

So sorry about your challenging day! I hope it gets better! You are right — focusing on what really is important — or for me being outside with my garden and pets – helps me focus!

Just to THINK and BE.
Thanks for the reminder. I needed this.

Interesting article. Some great thoughts here!! I like your philosophy of life.

Some people would say it is the stressful, frustrating moments that highlight the beauty and serenity of those quiet times.

I do so love this picture. Where we used to live had a view almost like this of the mountains and I miss them so much in this flatland where we are now. I love your blog and your wisdom and visit here everyday. Thank you for sharing all you do.

Thanks. How would we know when we have a good day if we never had a bad one?