Hosta ‘June’ is a gold-centered tissue-cultured sport of Halcyon. This is another hosta that normally shows a color change, with the gold color getting lighter as summer progresses. There are two forms of this hosta that are being sold, with one having a much lighter-colored leaf center than the other, and there is some debate about which type is the “correct” June. June forms a dense mound of foliage and has thick leaves that get broader as the hosta ages. The leaves are smooth with little corrugation. 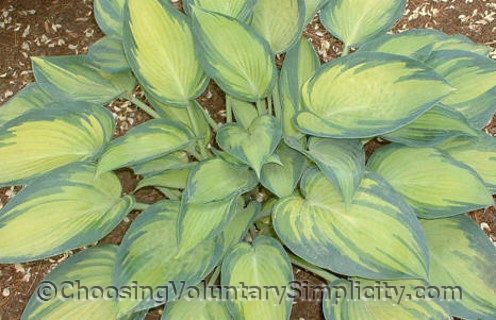 A mature June forms many seed pods. Mine is still a very young plant and last year it produced only one seed pod and only one viable seed. However, that one hosta seed resulted in a very miniature and thriving seedling that is the exact color of the center gold in my June’s leaves. June was 2001 Hosta of the Year. 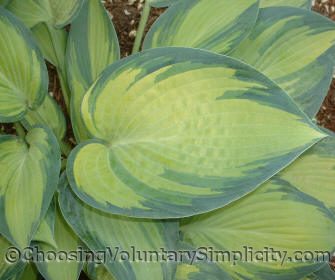 Written by Shirley Filed Under: Hostas in My Gardens

June is a beautiful Hosta. I bought one this year and it is just a Tissue Culture so it is very tiny still but I have hopes of it someday looking like your photo’s. I love the blue and the lime-green combination of this Hosta. Your photo’s are very nice!

I wonder how old this hosta has to be before it starts forming seed pods. I have had mine for at least 5 years, I think, and it flowers but so far no seed pods. It’s funny but most of my hostas don’t make seed pods. I wonder if it could be something about the growing conditions although the hostas look good. Your hosta information and pictures are a wonderful resource. I hope you will continue to add more hostas.

I have picked seed pods off this one but have never had any of the seeds germinate. I wonder if they were mature enough because they weren’t as black as your photos. I saved some seed pods from this year’s growth and plan to plant some of those around January. I’m excited to see what if anything I get.