The first time we ever saw Duck Duck Goose, it was late November and she was walking up the path to our house. This rather odd sight especially caught our attention because nobody for miles around had ducks and we knew she couldn’t have just wandered in. There was just enough fresh snowfall so we could see that her tracks began in our driveway, and it soon became obvious that someone had stopped a car in front of our house and dropped the duck off. She wasn’t the first animal that had been left here, but she definitely was the first duck. 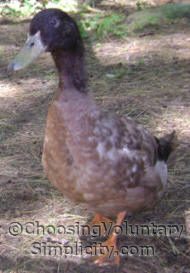 A few weeks later there was a strange story in the area newspaper about one of our neighbors (about a mile away), who was being accused of kidnapping a small brown goose that she claimed was being abused by its owner, who owned a farm in another town. The problem was that when the goose’s owner filed charges and the police investigated, no goose was ever found on our neighbor’s property, although she admitted taking the goose and leaving an envelope of money as payment. The court case was off and on for some time, and ended with the charges against our neighbor being dropped after the police discovered that the goose’s owner was housing many other animals in deplorable living conditions. Eventually animal cruelty charges were brought against the goose’s owner… he had to pay a heavy fine and all of his animals were taken away. 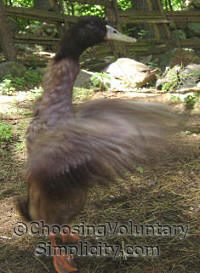 Fast forward to several years later, when another neighbor, talking about the kidnapped goose episode, mentioned that the newspaper had gotten the details wrong… that the brown goose was actually a brown duck. Until then we had never connected the little brown goose in the newspaper story with our little brown dropped-off duck simply because a goose is a goose and a duck is a duck!

Our duck is seventeen and a half years old now and still going strong. She doesn’t see as well as she used to, and she looks a little moulty right now, but she still enjoys her very active life. I love to watch her when she feels a breeze and she stands high on her tiptoes and enthusiastically flaps her wings.

Since all the parties involved have moved away, I suppose we will never know for sure if our little duck is the kidnapped goose we read about. The likelihood that she is, though, explains why we changed her name to “Duck Duck Goose.”

Not From the Power of Possession…

great story — and what a lucky duck — we live in the country too and I hate that some people think they can just drop animals off to get rid of them — thanks for sharing — love your blog.

Love this story! That is a lucky duck – and quite a story she could tell, being abused, kidnapped, and then dropped off to live with you. What a happy ending.

This is hilarious. Glad you “rescued” her! :)