Hollyhock seed can be planted in either spring or fall. In areas where the winters are severe (like here), more plants will survive if seeds are planted in the spring and the seedlings have the entire growing season to settle in. I think it’s interesting that when I let my hollyhocks reseed naturally (or when I scatter seed in the fall), most of the seeds won’t germinate until the next spring. It would probably be different in an area with warmer temperatures, but I always wait until spring to plant any seeds I have purchased. Hollyhock seeds can be planted outside about a week before the last frost. Plant the seeds one-quarter to one-half inch deep and keep them well-watered but not wet. Most hollyhock seeds will germinate in less than two weeks. 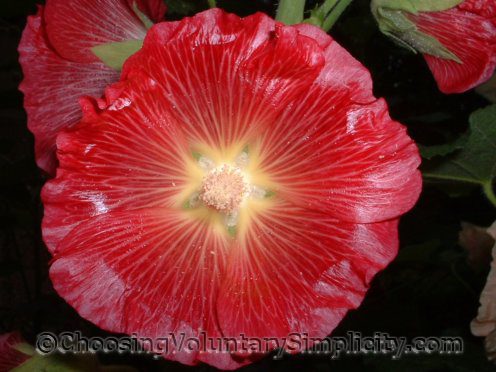 It is always a good idea to prepare the soil and let it rest for at least a couple of days before planting. Hollyhocks grow best in a good, rich soil that is slightly acid to alkaline. For the biggest and most colorful flowers hollyhocks should be grown in an area that receives at least six hours of sun every day, and they should be mulched and watered frequently to keep the soil moist. 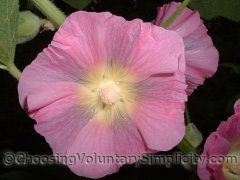 When I start seedlings indoors, I plant two seeds about a quarter-inch deep in a two-ounce cup. If both seeds germinate, I transplant one seedling to a second cup. I continue transplanting periodically to larger cups until the seedlings grow large enough for a six-inch pot. (I sterilize and reuse the same cups… and pots… year after year.) If you have young hollyhock seedlings to transplant, wait until all danger of frost is past and the soil temperature is at least 50°F.

I have read that the ideal spacing for hollyhock plants is twelve to twenty-four inches apart in rows at least three feet apart. I have always planted hollyhocks much closer than that, and if I broadcast the dried seed in the fall, I just scatter the seed around the existing hollyhock stalks. I have never had any problems with mildew or the hollyhocks not growing well or not flowering profusely, but perhaps I have just been lucky. 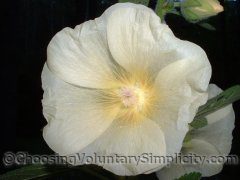 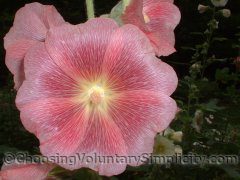 Most hollyhocks will produce leaves the first year and flowers and seeds the second year. Some hollyhocks will die after this two-year cycle, but I have found that cutting the stalks down to the ground each fall (leaving a couple of inches of stalk so I can see where each plant was growing) and adding a heavy layer of compost will keep most of the hollyhocks growing and flowering for several more years. I don’t cut the stalks until I have harvested the seed heads, and I leave the seed heads on the plant as long as the approaching freezing temperatures permit.

I purchased my first house 3 years ago and have quite a few hollyhocks growing – quite wildly, I might add. I am not an educated gardner (I know how to water and that is about it), so I’ve left most of my yard to do what it will, including the hollyhocks. I cut the stems each fall only because if I don’t they’ll fall across my driveway (which is dirt/gravel) and they’re a pain to drive over. But they come back every year – three and counting so far. I honestly don’t know what I’m doing right. :-) I hated them the first year but have loved them ever since – I love the way the blooms flower up the stalk – and they last forever! I may have to get brave and plant some seeds and be a bit more intentional about what grows in my yard. Thanks for this post – it may have been the prompt I needed to try my first seed-plant project.

Beautiful! I’m planning to plant hibiscus from seed this year, have you ever done that? Do you have any advice?

Barbara, I never thought I could grow hibiscus because I didn’t realize there was a winter-hardy variety. And apparently it is hardy to zone 4, which we are most of the time except for the very occasional zone 3 below zero temperature. They would be worth a try here. Certainly if I can find some seed, they are something I would like to grow. I would be interested in knowing how growing them from seeds works out for you.

Your hollyhocks are so beautiful. I am hoping to have some luck with hollyhocks this year. I have two packets of seed and I will follow your instructions. BTW I’m always very grateful for the easy to understand information you give here for the various plants. It makes it very easy to follow.

Do you use the petals from the hollyhocks for tea? They are mucilaginous so are helpful in cases of sore throats. My husband loves when I make tea with them and maybe peppermint.

Christine, I’ve never tried that, but I’m intrigued by the idea. I’m always interested in a natural cough or sore throat remedy. Do you dry the petals or are they used fresh? I grow peppermint and I do dry that.

Hi Shirley. You can use the petals fresh or dry. I have for the past 2 years dried some for winter use. My husband just loves how they help soothe the throat. I usually mix it with peppermint and a tiny amount of hyssop leaves too. If he has a cough, a leaf or two of horehound added is good too.

Can you grow hollyhocks in sandy soil if you add organic matter? Our property is dry, with full sun and soil that drains well but is poor in nutrients. Would we need to baby them, water continuously etc.?