Reader question… “I read in a book about decluttering and purging that a photograph of an item is a good substitute for actually having the item in your possession. Would you share your thoughts about purging sentimental items and what you think about the idea of keeping only the photograph and not the item.” –Susannah H.

I keep coming across this idea too… and also the assurance that it really works, even for people who are “keepers, savers, or sentimental types.” I think it depends completely on the item and how YOU feel about it, because a photograph might be a viable solution for one person and a terrible mistake for another. The important thing, I think, is to not let yourself be persuaded to purge items you value unless you are POSITIVE you will have no regrets about what you have done. 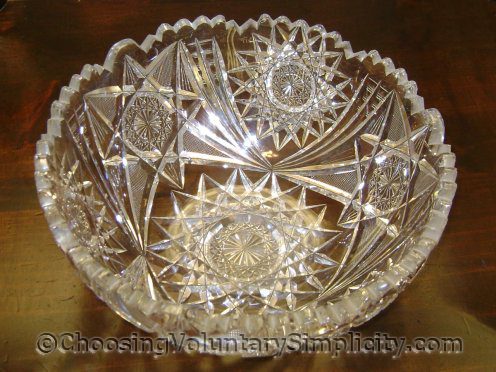 I can’t stress enough how important it is to know what YOUR feelings are. If an item means something special to you, you should never feel that you have to purge it to follow someone else’s idea of simplicity. And especially if you are in the middle of an emotional crisis because of some life change, this is not the time to do something you may regret later on.

I would suggest a trial run. If you’re not sure, take the photograph and pack the item away out of sight. You can always purge the item at a later time… without regrets.

It’s important to remember that simplicity does not mean a mandatory purging of items that add meaning to your life. If something is truly important to you, it deserves a place in your home.

Learning How To Eat Again When You Have A Soy Allergy

You are a wise lady. This is excellent advice.

I agree with this completely. When I lost my husband last year my relatives and friends urged me to sell or give away everything that had belonged to him. I went along with what they said and we took photographs of some of the more sentimental items. I can’t begin to tell you how bitterly I regret having only the photographs. This may work for some people and for some sentimental things but it does not work for me and I wish I had waited awhile before I made such permanent decisions.

Definitely know how you feel before doing that. BUT, I’m a crafter and make lots of different items. I have learned to take pictures of all views of my crafts, in case I want to repeat them, and discovered that looking through the album of what I’ve done over the years is just as satisfying (if not more so) than having the real thing. So, it is another job but one that helps in reducing the clutter of things. The next big step is to download your pix on mini-drives that won’t lose the pictures, something that has become very scary with digital pix. Forgetting to save them outside the computer or camera. But, this is a decision you have to make for yourself — not let someone else bully you into doing because of how they feel.

I think something else to consider is if the object has meaning when you hold it rather than see it. I have a baby blanket that belonged to my daughter that was so soft and holding it brings back memories of her soft skin. I also have a handkerchief of my grandmother’s that still smells of her perfume which brings back vivid memories of her. Having only photos of these items would never be the same. Now all that art that the kids do when they are little? That is something that photos are great for helping preserve – especially when the paint begins to peel or the clay creature’s legs start to fall off.

Some things decisions just need to be given time. I dearly loved my Christmas ornaments that I began collecting when I was a teenager and continued through adulthood. Many of the ornaments were handmade and were a rememberance of the people who made them for me. Some were purchased especially to celebrate my children or my husband. After 14 years together, my husband and I separated and then finally divorced 4 years later.

When I first separated with my husband I made the decision to just walk away with my children and not take things that would just remind me of him. I let everything go- serving dishes, furniture, appliances. I just didn’t want to fight for anything.

My mother, in her great wisdom, went over to our house and packed up items she thought I would want later, including my Christmas tree and ornaments and put them in her attic.
The first year, I only put up a small tree and some inexpensive ornaments a day or so before Christmas and then had to take everything down right away because I was still greiving. The second year, Mom brought over the tree and ornaments and organized my kids to set the tree up and bake cookies as we used to do. I spent most of the evening close to tears and trying to hise that from the kids.
The next year was easier. The kids put up the tree while I directed and I began telling them who made which ornaments or what they all meant. When we took down the tree that year, I packed up the sports team ornaments that I had collected for my husband and gave them to the girls to keep. They still put them on the tree each year now, but my emotions about it have changed. I am so thankful, Mom forced me to work through my loss and not give away a part of me that existed before my husband and I even met.

This sort of thinking helped me to consider what objects to keep of my grandmother’s when she moved in with my sister and what to give away. Things that I couldn’t hold onto I took photos of, the rest I made special places for. It’s all about balancing what’s best for the individual.

Thank you for the advice!

I couldn’t very well keep a house that didn’t belong to me, so I took lots of pictures before it was sold. It was an old farmhouse that had been in the family since 1925. I cherish the memories.

OMG! We own the same bowl! I inherited mine from my mother. She kept flowers or fruit in hers. Just amazing! My friend Doug subscribes to this sentiment. You can’t keep everything, otherwise you end up a museum curator. So take a picture and donate or sell the item. You benefit twice and someone else will benefit too. Keep the things that are truly valuable and use and display them wisely.