A Life Worth Saving

Yesterday morning I was watching my husband drive our small tractor over the bridge that crosses the brook in our meadow. It’s a sturdy little bridge made of small logs and planks, but it flexes when anything heavy goes over it, and this morning as the planks shifted I saw something small, dark, and furry drop from the underside of the bridge into the water. The water in this brook is quite deep with many strong currents, and this little furry something was immediately swept downstream. I could see it struggling furiously as it got further and further away, but its struggles clearly were no match for the force of the water.

Several hundred feet further down the brook in the field next to our property some clumps of dead leaves had created a natural dam at one side of the stream. That’s where we finally found what we first thought was a little black mole, partially covered by leaves and other debris and looking very lifeless. It took a while to scoop the little creature out of the muck without hurting it. Imagine our surprise to find we had rescued… not a mole… but a very exhausted little bat! 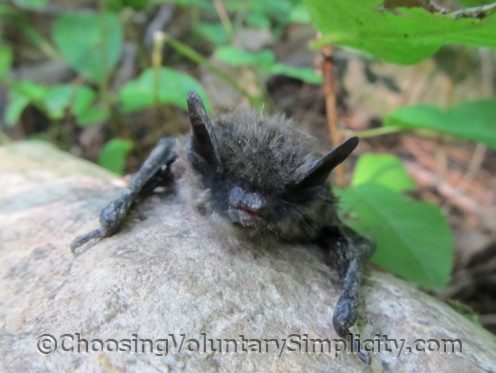 The bat was in pretty rough shape and very, very wet. My husband carried it back to our meadow on a large piece of bark and left it on a big rock near the bridge but a good distance away from the water. The rock was warm but out of the direct sun, and there were lots of sheltering leaves to shield the bat as it hopefully dried out and recovered. 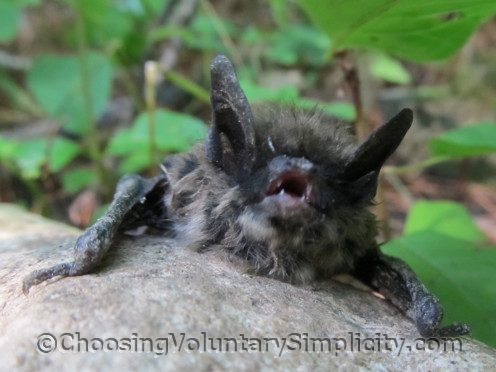 By afternoon the bat’s long, thick fur was almost completely dry and it was starting to move around on the rock’s surface and feeling energetic enough to warn me away when I took these photographs. When we checked again just before dark, the bat had flown away.

The meter reader arrived just as we were walking back from the field, and she asked what was that thing on the piece of bark. When we told her we had just fished a drowning bat out of the brook, her immediate response was “Why?”

Clearly to her a bat’s life wasn’t worth saving.

It WILL Stop Snowing… Won’t It?

I totally think the bat is worth saving. They have such an important job to do. Poor guy, he was probably resting when the tractor shook him off. Glad he flew off.

So glad to hear this! Most bats cannot usually take off from the ground, so putting him on the rock was an excellent thing to do.

People like that meter reader make me mad. How can they be so unfeeling? I’m so grateful there are other people like us who do care about all living things. Your blog shows you to be a kind and caring person. I love your posts.

I have seen a bat up close and personal only twice in my life. Once it was hanging on our screen door and me and the kids got a real close look. I was surprised that it was such a delicate creature. Thanks for saving your bat. I would have done the same.