This is my Prize butter churn. Some of the lettering on the front of the churn has faded and is somewhat difficult to read in areas, but the top line says “THE PRIZE” with a curlicue design below it, the next line says “CHURN,” and the last two lines are “Pat. Oct 8, 1867 & Mar 18, 1873.” 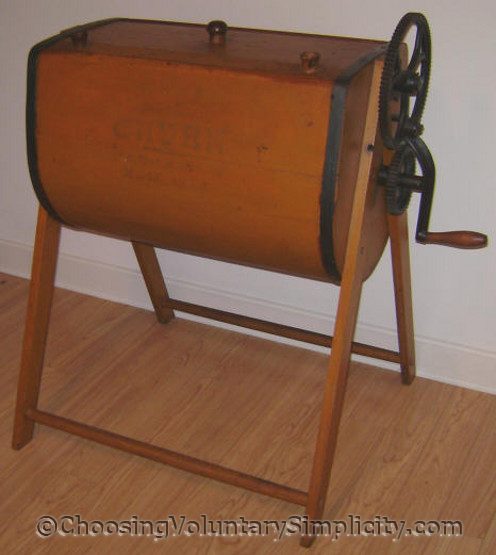 This churn is in such wonderful condition, I would guess that it either did not see much use or its previous owners took extremely good care of it. It still has its original finish and all of its original parts, including the small square-headed iron cotter pin on the iron gears. 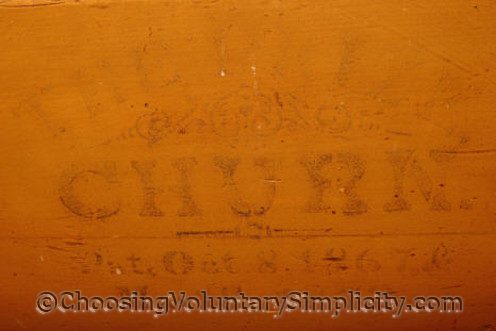 There are two long hollow wooden “tubes” that fit down through the thick wooden lift-off cover of the churn and pull up and out for removal… these tubes have carved flared out tops and probably let air escape. (I have removed one and laid it on its side in the photo below to show how surprisingly long these tubes are.)

The top of the churn lifts off to show the intricate wooden paddle mechanism inside. The paddles and the inside of the churn are all made of wood and are also still in perfect condition. 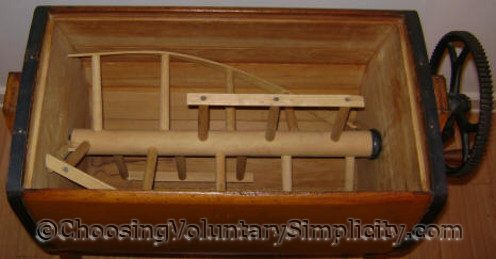 The photographs below show both ends of the churn. There is a carved wooden plug in the bottom of one end (the end without the gears and handle). I have no idea what this plug was for… perhaps for draining out the buttermilk or the water used for rinsing the butter… or the water used to clean the churn?

The ridges on the two gears fit together and the gears are connected to the paddles inside the churn. When the handle is turned, the paddles turn too. The smaller gear has raised lettering and numbers: “PATD MAR 18 1873.” 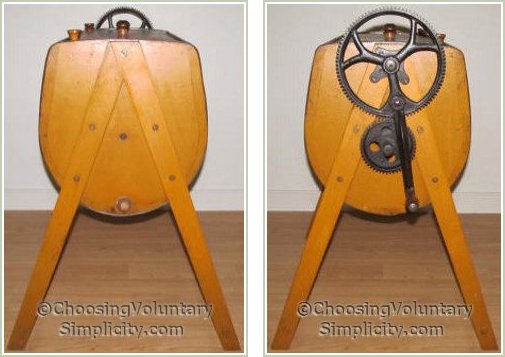 My mother and father never knew who the previous owners were… the churn was one of the several old items that had been left in the house they moved into shortly after they were married. My mother said she always resented the presence of this churn because it took up so much room in their small house, but she must have concealed the churn well, because I don’t remember ever seeing it. My mother said it was always stored out of sight under the eaves in one of the upstairs bedrooms.

Not too long after my husband and I had built and moved into this house, my father asked me if I wanted the churn, and after I had seen it, of course my answer was an enthusiastic yes. We have given it a prominent place in our large kitchen, where it somehow blends in equally well with the modern appliances and my other cherished treasures from the past.

The First Day of Spring?

This is indeed a prize. I am so envyous. Thanks for sharing this.

You have such amazing things. I would so love to see your kitchen. It must be amazing. Would you ever consider a post about your kitchen?

Do you think you’ll ever use it to make butter? or is it too valuable for such use? What a wonderful object. When I think of churns, I always picture the barrel-shaped one from Laura Ingalls Wilder books. This looks so much more efficient.

Cherished indeed!!! What a wonderful piece of history you have. Can you imagine using this daily or even weekly and all the work it took plus the hauling of the water up from the crick! We have it so easy these days, and I wonder if we are really any better off than those who came before us. I think I could give all my big appliances up except for on thing…the washer! We were in England twice for 3 years each and the first time was 80-83. Our first house was about 30 miles from the base and only one car that hubby took to work. For a month I hand washed our clothes in a huge sink and hung them outside to dry on bushes or wherever I could find…I still remember that feeling..especially jeans! Yep..everything but the washer!

Okay, so have you ever used it? I’ve made butter using heavy cream and my hand mixer. This looks like it would do the job much better than that.

My mother has a butter churn very similar to this – only hers is more of a cube shape than a rectangle,the paddles inside are solid and there are no tubes on top. Her churn holds about 5 gallons of cream. She has always told me that the plug on the side was for draining the buttermilk out once the churning was complete. Her churn came from a great aunt who got it from a neighbor that owned a dairy farm. If you lift the lid, you can still smell the sour scent of buttermilk. What’s really funny is that when most folks first see it they usually think it is a washing machine!