A couple of days ago I noticed that there were bees on the dandelion flowers (earlier than usual this spring). One bee had a bright orange stripe around its body… this is a tricolored bumble bee, also sometimes called “orange-belted” for obvious reasons. It is fairly common in the northern United States. It is a large bee… males and worker bees can be up to half an inch in length, and the queens are even larger at more than 3/4-inch. Tricolored bumble bees are considered to be superior pollinators because they will collect pollen even in cold or wet weather.

The queen comes out of hibernation in late April or early May and spends hours collecting pollen and looking for a suitable underground nest site. Once a site has been chosen, she secretes wax to make the nest where she lays her eggs, and a “honey pot” for the storage of nectar. The eggs hatch into worm-like larva in three or four days, become pupae, and spend fourteen days developing their adult tissue. 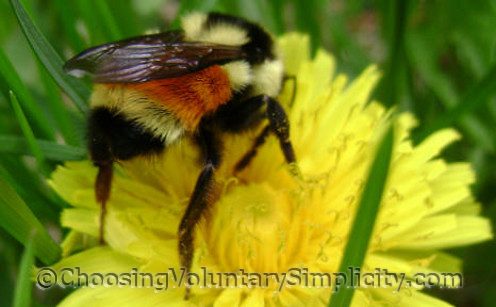 After two or three more days they have their adult coloration, their wings have hardened, and they can fly. These are the worker bees, and their only job is to collect nectar and pollen and store it in the nest. 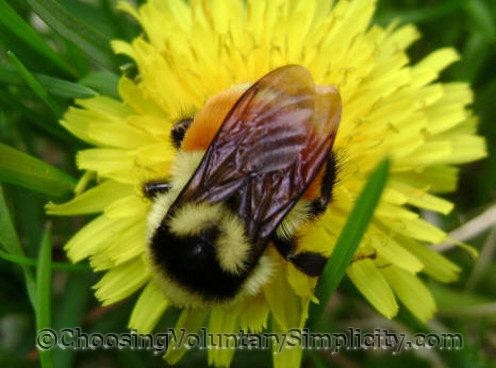 Meanwhile the queen starts to lay more eggs. Until late summer she will lay only unfertilized eggs that will become males. After that she will lay only eggs that will become new queens. Before the end of the season, these new queens must mate and find their own underground hibernation spots where they will remain dormant until the next spring, when the entire cycle starts again. 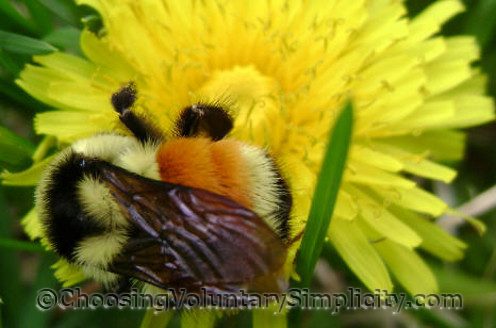 It’s a short life for the old workers and the males… they and the old queen will all die by mid-autumn.

those pics are just so beautiful!

ah, I see these often in my Canadian West Coast garden, they are friendly bees too, sometimes I pet them!

Wife Mom Maniac, and I thought I was the only one who did that…!!!

Hi Shirley,
I stumbled upon your blog, via this post on bees. I was trying to find out who these funky bees were in our yard, and you had the most lovely photos and just enough information to answer the children’s questions about these giant, orange belted bees!
I was intrigued by your writing style and knowledge, and I ended up (accidentally) spending a couple hours reading through many of your posts. I just wanted to tell you that I really love your blog! Your writing is delightful, your photos are gorgeous and the content is fascinating. Thank you so much for sharing your thoughts with the world! I have added you to my ‘favorites’.
kate

Kate, thank you so much for taking the time to write and for your very kind comments. I’m glad you are enjoying my blog and that your question about the tricolored bees led you to it. It’s funny, because I had never seen one of those bees here before I wrote that post. Now I’m seeing them all the time. I wonder… is it me… or them?

I saw my first tricolored two days ago. A queen, I think. Very exciting.

I have just had this huge Bee in my living room, not having ever seen one with such an orange colour before I thought I would try to find out more details, thanks for writing this blog, I would like to add that I live in Cornwall UK.

Hi Shirley:
Lovely blog! But how did you get those bees to sit still? I just ran out a few minutes ago to take pics of one orange belted fellow and none of my shots compare to yours. He was in a patch of Chionodoxa being very busy. It’s April and the snow is all gone here in Gatineau, Quebec but still very early for this kind of wonderful Good Friday surprise.

HiShirley,
i found your blog as i was looking for some info on the bombus ternarius aka the orange belted bumblebee.I stumbled across it as i was taking out the recycle and seems as if it couldnt fly? i feel so bad for this bee it is beautiful. I live in Calgary Alberta,Canada and have never seen this type of bee beefore do you know why it cant fly? thanks for the help

Scott, was it perhaps just too cold? Bees have trouble flying in cold temperatures or in rain. If the bee wasn’t injured or wasn’t dying from natural causes, it might have just been cold. Often on a very cold morning I see bees that are acting sluggish and not flying, but they are fine once the sun comes out and everything warms up.

I just wanted to say thanks for your Bee website. I noticed that some Bees had taken over the swallow’s house. I didn’t want to kill them if they were good bees. So my hubby and I went out after dark and moved the nest away from the garden. Your website helped us ID the bumble bees as Tricolored Bumble Bee (Bombus ternarius). These little guys are busy and we are happy to have them.

These guys live under my house and the females are very large. I was able to get some great shots of them myself and the coloring turned out great against the purple chive flowers.

I too have pictures of these lovely bees..I had never seen one before and was quite taken aback by their vibrant color. I spotted them in the English Garden in Assiniboine Park in Winnipeg, Manitoba.

I started noticing these little guys in my yard in Colorado this year.I have been planting alot of perrenial flowers and they do really appear to be calm. Thank goodness because I love going out in the yard.

Thanks for posting this. I get these bees in my house for a couple of weeks every spring. I’ve always wondered what they are.

I too was looking for information on this orange striped bee as I had never seen one before today. It was also the first bee I’ve seen this spring. We’re in the South East corner of British Columbia. Thanks for your post!

Howdy Shirley,
Just wanted to thank you for this page. I saw one of these ladies today. I had seen one or two before. But, finally decided to find out what they were called. You have some awesome pictures. And I appreciate your writing about them.
Here in Montana, we have a distinct for nature. And, we have a lot of different species. This bumble bee is extremely beautiful. Even the Australian Shepard was interested.
Thanks again,
Paul

I saw one today and it is huge. Must be the queen. Looked up to see what it is and found your website.Will try and get some nice photos of it tomorrow. Live just outside of Winnipeg Manitoba. Thanks.

I see these bumble bees when I go to our local organic grocery store. The front of the store has the perennial plant Cat Mint growing outside. And, they keep a dog watering bowl nestled in the plants. Yesterday, I went to the store and found one of these lovely bumble bees swimming in the dog watering bowl. It was swimming round with no way out. I got a little leaf, dipped it into the water underneath the bumble bee and lifted it up and put it out to dry in the sun. When I came out of the store, she was finishing cleaning herself. The preening is so intricate and meticulous! She obviously appreciated the ‘lift. Pretty little ‘bumbles’ with the orange stripe . . Made my day.

JB, it would be helpful if people who put out water for bees would include a small stick or something for the bees to use for a ladder if they get into the water. We do that for birds that fall into livestock water tanks when trying to get a drink.

I’m out in my northern Canadian unfinished backyard and raking up dead grass and counting down the days until we get a new green lawn and my son and I see two of these bees! Each trying to find a safe spot. They did. And they are underground now :) too cool!!

I just saw these bees this year and got a few pics of them on the dandelions. Curious though if the males/workers are all the same coloring, just different size?

I am so very lucky this year to have a nest under a step in my backyard of these beautiful bumblebees! So cool to hear the buzz of the nest in the evening and watch them come and go!

Hi, I’m in New Jersey and just saw one of these bees for the first time in my life. I’m 43. I’ve always observed nature and never saw one until now. They are beautiful. I tried to get a photo, but it seemed to be bothering the bees. So I backed off. They are on a weed I left grow in a section of my yard for rabbits to eat. I don’t know what the flowering weed is. It has little lavender flowers. I love your article . So glad I found it. Great pictures! Thank you

I noticed several of these in front of my house in Colorado. They seem to enjoy my perennials, especially the catmint. I’ve tried many times to get a good photo, but I have better luck just observing them going about their business. They don’t mind me at all.

We just saw these for the first time today. They were in front of our house in Englewood, Colorado gathering from the Salvia. Great pictures, thanks for the explanation.