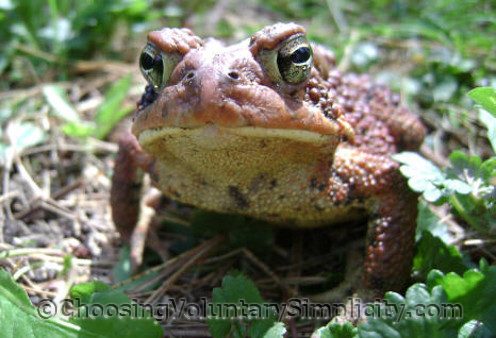 This time of year the ground is still pretty cold here, and it’s not unusual to find toads buried deep into the soil. If we have any digging to do, we dig very cautiously. So that’s why a few days ago I was using my hands and a small trowel to dig a hole for the hosta I was planting. We’ve really worked hard on improving the soil in this particular garden, so it is rock free, soft, and easy to dig.

I was making great progress digging the large hole I needed when suddenly I realized that I was holding a soft, moving “something” in one hand. So I did what any normal person would do under those circumstances and let out a piercing scream. My husband came running over to see what had happened. Unfortunately, one of our neighbors was walking past just as I screamed, and he was curious too.

Several minutes later, after the explanations had been made and my level of embarrassment had lowered a bit, I went back to planting my hostas. And somehow, even though I had already dug up one toad, and I was fully expecting that I might find more… when my hand closed on another soft, moving body, I screamed again! 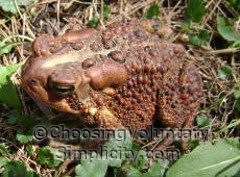 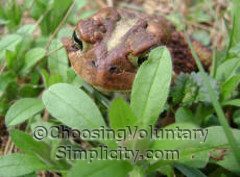 As luck would have it, the neighbor had finished his walk and was on his way back past our house again and was just opposite me when I screamed. This always dignified and very reserved elderly man was so startled he actually jumped into the air, which made him almost as embarrassed as I was. This time he didn’t stay around to ask for an explanation! 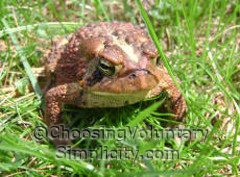 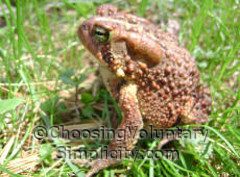 I’m not the least bit squeamish at handling toads, and I’m not normally a screamer, but somehow feeling a soft toad body moving and pulsating in soil that shouldn’t be moving is scream provoking, even if you’re somewhat expecting it to happen. 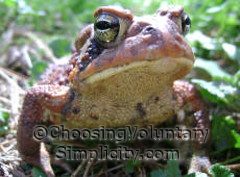 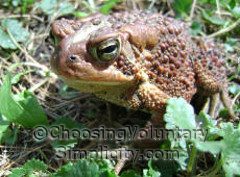 Because it is still cool, the toads aren’t fully active yet, and eventually they burrowed back down into the soil. It’s fascinating to watch them sink out of sight… it looks like they are disappearing into quicksand.

Why We Got Rid of Our Compact Fluorescent Bulbs

That top photo has to be one of the most awesome photos of a toad that I have ever seen!!

Gotta love the expression on that toad’s face. What an attitude!

I don’t know how you manage it but your bee, toad and frog photographs are amazing. I have never seen such detail. Keep up the good work.

I can almost see your elderly neighbor jumping into the air when you scream. That’s a great story. I enjoy this blog so very much, you always have something informative and uplifting. I feel blessed that I found you.

I really enjoy your stories about things that have happened to you. You have an incredible writing talent and a very unique way of writing that is more enjoyable. If you haven’t already considered it, you ought to write a book. I know I’d buy it.

I am sitting here chuckling. Thanks. And let’s face it, a toad is better to latch on to than a snake!

Hi! I plan to be much more careful in the future as I was digging up dog grass in my “new” and extremely neglected community lot and accidentally speared a toad last April. Thanks for your blog.