Home » Doing It Ourselves » Our Hand Dug Backyard Pond

We dug this pond by hand. It was a huge project and took quite a while because we had to dig out so many large rocks. We have an abundance of small natural springs on our property, and we could see right away that we had chosen a good spot for our pond. Unfortunately though, many of these springs don’t produce much more than a trickle. We were hoping that if we kept digging, we would hit a large spring eventually, and that did happen… but only after we had dug down to a depth of over five and a half feet. 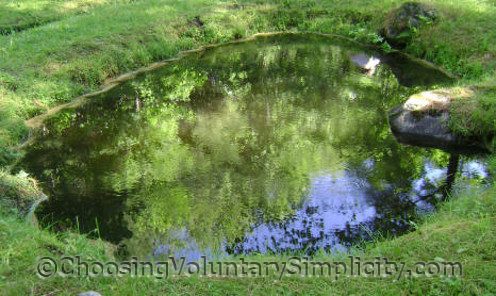 Of all of our landscaping projects, our little pond is one of my favorites. There is always something to watch in and around the water. Right now the pond is alive with fast developing tadpoles. From the variations in color and size, I think some have to be toads and salamanders, although the majority are probably frogs because any walk around the pond means at least twenty frogs hopping into the water. We’ve seen deer, raccoons, coyote, and turkeys stop to drink, and on two occasions a large crane.

So the pond is nearly six feet deep and roughly eighteen feet wide and twenty feet long. We might have made it bigger than that, but we ran into some really huge underground boulders that we couldn’t possibly have gotten out of the hole without machinery, so we used them as our boundary lines. The pond doesn’t have a liner, a filter, or a pump. The water trickling in from all the little springs keeps the water level constant and the pond’s own ecosystem keeps the water fresh and clear.

We liked this first pond so much we decided to dig another pond on the other end of our property. I have been wanting to start a bog garden in that area for some time, and I thought it would be nice to have a pond there with pitcher plants growing nearby. It was obvious from the start that this pond is going to have a more vigorous water supply than the other one because the biggest problem so far in the digging has been having to bail the water out of the hole.

All I can say is W-O-W !!! Your pond is so beautiful. I love your site. There is such a wealth of information here. Thank you for your wonderful blog!!

This post is very timely for me because my wife and I are landscaping the back yard and are planning to have our own backyard water feature. I don’t think we have any natural springs in our backyard so we will probably have to end up using a pump but your post and the photograph are very inspiring. Thanks for sharing; it’s amazing!

I was searching about natural springs and came upon your website – I love it!!! Its going in my bookmarks! I have a garden in the low area of my yard – just got done digging a trench all around it to put drain tile as it turns into swamp after rains. The drain supplier is a friend and he was wondering if there is a natural spring under my garden as it seems to stay sooo soft all the time (which makes it hard to till early spring for cold hardy plants!). Thought about doing what you did with the small pond – thinking maybe excess water would go to that and help keep the garden less ‘soft’. What were the signs of the springs being there – could you actually see clear water coming thru afters into the cloudy mucky water as you dug? Very interested! Look forward to spending sometime reading more and more of your blogs.

Peg, the land in the area of the first pond we dug was completely dry. And yes, when we hit a spring, we did see beautifully clear water gushing out. Some of the springs were tiny… others were much larger… but we were lucky that there were literally dozens and dozens of springs so there was eventually plenty of water for the pond.

The second pond we dug was in an area that sounds like your garden. We chose the lowest spot for the pond and again found lots and lots of small springs.

We don’t use any filters or pumps in either pond and both stay full of water and the water in the first pond is always crystal clear… it will take time for the water in second pond to become clear. Both ponds are FULL of frogs!

That’s a beautiful little pond. Makes me wish we had some natural springs!

Hi. I’ve just had help digging a wildlife pond in my garden in the UK. I can’t wait for it to fill up with wildlife, and to fill it with nature water plants and reeds. Great to see your site. Jane

I’ve always loved the peaceful look of a nice pond. Yours is a beauty.

Love reading about the joys of ponds and those that enjoy simple beauty.

We have a very similar situation with a natural spring on the land that we just build. We will be making a pond too. Thank-you for sharing!