I came across an amazing old book about culture and manners recently, and I found the tutorial on how to act when meeting the President especially interesting.

It is customary for the President to give several state dinners and official receptions during each session of Congress. Besides these, there are also general receptions, at which time the White House is open to the public and any citizen of the United States has the recognized right of paying his respects to the President.

On the days appointed for the regular “levees” the doors of the White House are thrown open, and the world is indiscriminately invited to enter them. No special dress is required to make one’s appearance at this republican court, but every one dresses according to his or her own taste or fancy. The fashionable carriage or walking-dress is seen side by side with the uncouth homespun of the back-woodsman and his wife.

Nor are there any forms or ceremonies to be complied with to gain admittance to the presidential presence. You enter, an official announces you, and you proceed directly to the President and his wife and pay your respects. 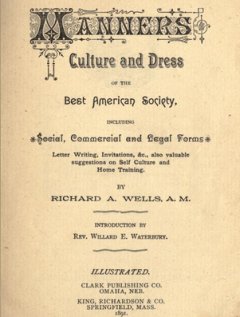 They exchange a few words with you, and then you pass on, to make room for the throng that is pressing behind you. You may loiter about the rooms for a short time, chatting with acquaintances or watching the shifting panorama of faces, and then go quietly out, and the levee is ended for you.

If you wish to make a private call upon the President, you will find it necessary to secure the company and influence of some official or special friend of the President. Otherwise, though you will be readily admitted to the White House, you will probably fail in obtaining a personal interview.

–from the book Manners, Culture and Dress of the Best American Society, Including Social, Commercial and Legal Forms, Letter Writing, &c., Also Valuable Suggestions on Self Culture and Home Training, by Richard A. Wells (copyright 1890)

The book is copyrighted 1890, so the President at the time would have been our twenty-third President, Benjamin Harrison. It’s hard to imagine the President of the United States ever being that accessible to the general public.

Appreciating the “Now” of My Life

We might all be better off if the citizens *still* had that kind of access to the president.

This is priceless. You find such amazing stuff, thanks for sharing.

Wowsers… that is amazing. You know though, I remember as a child my family saw President Johnson. He had come to our area to speak and walked along the streets shaking hands with folks and chatting briefly (very briefly!) My father was standing with my sister on his shoulders and me at his side, and the President made a beeline straight towards him. Family lore says it was because my sister was such a gorgeous child with her huge blue eyes and blond ringlets;)
My father shook his hand but some overenthusuastic fellow pushed me out of the way before I was able to greet him. I can’t imagine a president in this day and age being so unprotected. I would love to meet the President someday!

It boggles the mind to think that, back then, the President was accessible to the public. It must have empowered citizens to know they could meet him, however briefly.

Nowadays, when money does the talking, one had better be plenty rich to do this.

Seems like Democracy was stronger back then, doesn’t it.