How To Harvest Hosta Seeds

I like so many things about hostas… their differences in size, leaf texture, and color, how easy they are to grow, and how impressive they look all season long. But even more than growing the mature plants, I like the mystery and challenge of starting new hostas from seeds. Many people insist that hosta seedlings started from seeds from ordinary hostas will all turn out to be the “plain green” variety.

That is so not true! The first year I tried growing seedlings, only a couple of my hostas had produced seed pods, and both hostas were a very common variety. I decided to plant some of the seed anyway, and now (many years later) those first seedlings have grown into giant hostas with the most pebbly leaves I have ever seen, miniature hostas, hostas with shiny leaves or round leaves or long pointed leaves, hostas with rippled-edged and twisted leaves, blue hostas, golden hostas, and even some hostas with variegation! When you plant hosta seeds, you never know what you’re going to get! 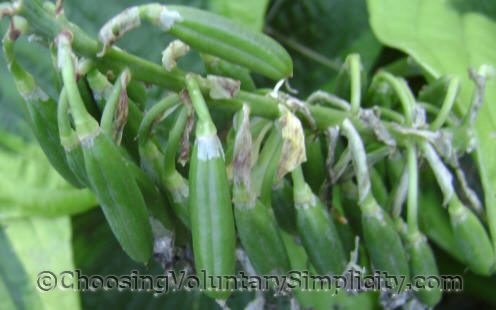 The usual advice is to let the seed pods dry on the stalk in the garden until the pod is somewhat dry and about to open. I’m sure that works well in a warmer climate, but here in the northeast, the seed pods never reach that stage before the first frost. It is still possible, though, to collect the seed, because as long as the seeds in the pods are well-developed and have turned black, they will probably produce seedlings. 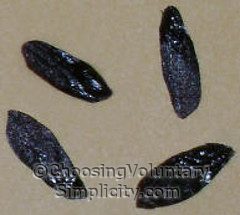 I leave the pods on the hostas as long as the weather lets me, then bring the pods inside and put them in large white envelopes to dry. Small lunch-sized paper bags work well too. I like to follow the heritage of the seedlings, so I label each group of seed pods. Since the pods are always green when I collect them, I have found that the seeds are easier to remove if I let the pods dry in the envelopes first. After a few weeks, the pods will have dried enough so that some of the seeds will start to fall out of the pods, and the rest of the seeds can then be removed easily. Viable seeds will have a noticeable “bump” on one end.

Although hosta seedlings are easy to grow, they do require strong lighting and frequent watering. I have several grow lights set up with shelving and usually start seedlings between November and January. This timing produces good-sized plants (sometimes already in bloom) by the time it is warm enough to move the hostas outside in early June.

Since I’ve grown so many new hostas over the past several winters, and I’m starting to run out of space for new gardens, I have decided that this winter I will not start any new seedlings. My resolve will probably hold until the night when the first frost is predicted and I find myself outside collecting “only a few” pods.

Some Thoughts on the No Shampoo (“No Poo”) Movement

Thanks for the great instructions and the photo of the seeds. I didn’t know that the seeds were in the pod. I thought the pod was the seed! Great blog…….. I love your photos.

Danyelle, when I first started growing hosta seedlings, it was all such a big mystery to me because I had trouble finding information or even what the seeds looked like, so I’m glad this was a help to you. I hope you’ll try growing some hostas from seeds. I think you will be pleasantly surprised with the results.

Very interesting post. I’ll have to try this next year!

Can you tell me how to break up hostas that have gotten too big? I have a few that are huge and I would like to make them into several smaller ones. Thanks!

Lea, in early spring when the hosta are just starting to grow, take a long sharp bread knife and insert the knife down deep between 3 or4 sprouts. Then with a small spade or garden shovel loosen the dirt around this section and left out. I used to loosen the dirt around the whole large plant with a large shove, lift the plant up, and then cut the sections out but that was a pain to do. Hope this helps.

Great hosta information and pics. Love those plants and would like to have more. Could you tell me if you’ve ever stumbled upon a hosta seed exchange? Since they can fit into an envelop, I’m guessing that it might be easy to exchange them. And if you don’t know the type of hosta, you could include a picture. Great blog!

Yes, I’ve known of a lot of hosta seed exchanges. Many of the hosta forums have seed exchanges sometime in the fall. Another idea… sometimes hosta nurseries will leave seed pods on their hostas and are glad to let customers take them if they ask. Just remember that the hostas you start from seed will not look like the parent plant, and even seeds from the same hosta will produce very different looking hostas. That’s the fun part, though, because the seedlings are always a surprise.

Thanks for your great post. Lovely photos. I too did not know what the seeds or even the pods looked like. Now i realise only my Halcyon has seed pods anyway. I have opened one of the pods and hurray! it has viable seeds.
My Krosse Regal, in its 2nd year and lovely in a large container, has only just started to bloom (September) and am truly gutted that it is sterile. All my hostas are grown in containers as i only have a tiny garden. I will try my luck at sowing my seeds.

Lily, good luck with your hosta seedlings… it’s really interesting to see how different they all are.

I have been looking for a site like this for some time. I especially love the hosta information. I was toying around with dividing or using the seeds? Which is best? I do not have great lighting set up in my house, Oh How I wish I had a greenhouse! These plants can go as high at $15.00 so I would love to grow and give to my family and friends. Thanks for having such a great site and I want to check back on the recipes.

Karen, I don’t think there is a “best.” If you want hostas identical to the hostas you have, then you will want to divide them. Seeds will give you “mystery hostas”… very few seedlings will look like the parent plant, but you will get a great variety of leaf shapes and edges, shades of green, blue, yellow, etc… and even some variegation. Personally, I prefer working with seedlings because it is so much fun to see the differences.

excellent tips, I have 2 and wanted to try having some more in a differant area without cutting those I have…shall keep my eye on the ones I have for the seed pods forming.

great info,i am getting started in hosta seed growing.i divide alot of plants,for my spring gadden sale then buy more different plants.i will be trying your advice. i have 12 seeds in pots now

Love this info! I have hostas at the edge of my woods and have always removed the stalks after flowering because I thought it somehow taxed the plant… If left on their own do they self seed? If I harvest the seeds can I just toss them into my very good forest soil?

Ramona, it really depends on the type of hosta. Some form seeds and self-seed readily… others not so much. If you harvest the seeds when they are mature and toss them on the soil, you should get some plants… although not as many as if they self-seed or if you start plants inside.

Why do some hostas have seed pods and other hostas do not. The ones that don’t flower, but don’t have any pods where the flowers were. Thanks!!

I like your blog stuff, thanks for sharing this info!

Having many deer in my area that love hosta – I have found that sprinkling garlic powder on the plants does not damage the plants and the deer stay away. Only problem – every time it rains, you get to sprinkle garlic powder again. Having tried so many other repellents, this one works.