I had intended to take photographs of the rhododendrons. All of them were especially lush and beautiful this year, but the largest… a nearly six foot high bush near the back porch… was just spectacular. It was literally covered with blooms from top to bottom, and as you might imagine, the fragrance of so many flowers was almost overwhelmingly intense. The bees loved it. 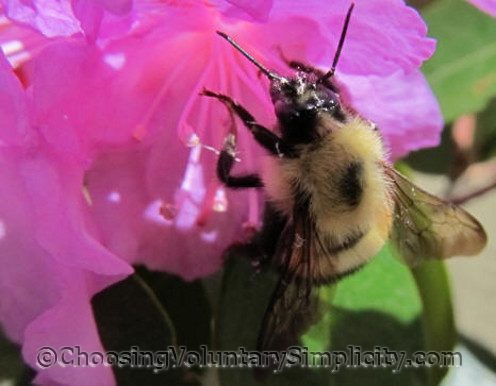 Which sort of explains why although I intended to take photographs of the rhododendrons I ended up taking mostly photographs of the bumblebees. The bees weren’t distracted by either me or my camera and were actually quite cooperative, even turning so I could get a better shot when I gently nudged them with my finger. 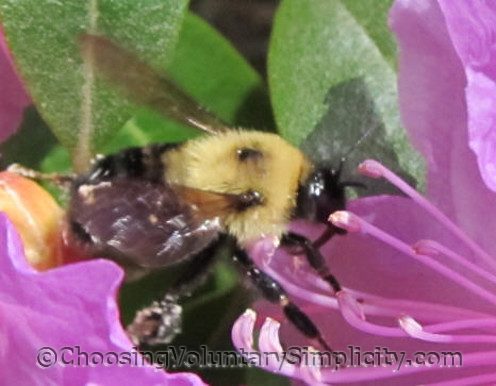 My father had a great appreciation of nature and he especially loved spending time in the woods. He taught me to feel comfortable around bees when as a little girl I “helped” him track honeybees back to their nest. My father’s method of tracking bees was very simple and non-invasive to the bees. The first step was to figure out which flowers the honeybees were frequenting. Next my father would soak a slice of bread in boiled sugar syrup and leave it on a small saucer somewhere near those flowers. After a few days, or sometimes after only a few hours, the bees would discover the syrupy bread. We would know it was time to begin tracking when the saucer was black with bees. 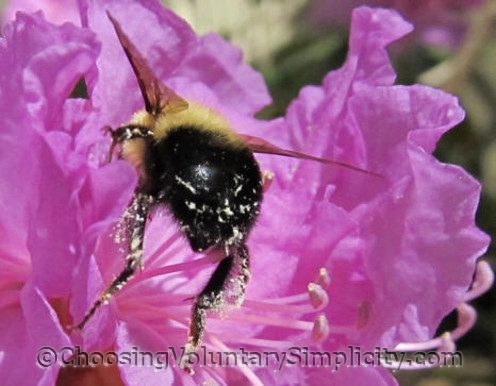 After a honeybee feeds, it always flies up into the air and around in a tight circle before heading back to its nest, so it’s very easy to see the direction of its flight. We would watch as the bees circled and started to fly away, each of us concentrating on one bee. My father would move the saucer to the last point where we had clearly seen the bees and leave it in that new location for the bees to find again. We would repeat the process in another few days, watching the bees fly away and moving the saucer again to another spot even closer to the nest. Obviously this was a process that required patience, but my father had plenty of that. Eventually the bees would lead us to their nest… which was almost always located in a big, hollow tree. 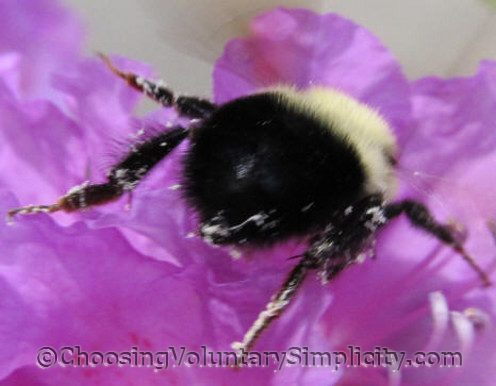 And that was the end of it for my father. His goal always was just to track the bees back to their nest because it was something he enjoyed being able to do. He never smoked out the bees or collected any honey. The bees, he told me, needed the honey more than we did.

It Will Always Lead To Something Else…

Gratitude Unlocks the Fullness of Life

I wonder if bees feel as soft and fuzzy as they look in your photos. It’s funny, I used to think of bees as pests that you need to get rid of if they’re too close to where you live. Now I’m starting to see how unique and beautiful they are. I still don’t want to get too near to one though. I really enjoy your blog and want to thank you for sharing your knowledge and experiences with the rest of us.

Loved the photos and the story. Always enjoy myself when I read your blog. I would have enjoyed knowing your dad.

Amazing detail here. These are great photos and an interesting account of an old bee tracking method.

I remember my late husband used to bait bees and capture them in a container. He would let one bee out at a time and follow it like you described. I think your father’s idea was a better one and my husband would have liked it, He has been gone for 15 years now, your post brought back some pleasant memories for me. Thank you

Yours are the best bee photos I have ever seen, The detail you are able to capture is incredible right down to the veins in the wings. I am impressed. As always, wonderful post. I really enjoy your blog.

We have flowers and honey bees. I’m tempted to try this.

What a lucky little girl you were to have such a wise and patient father. Your story brought tears to my eyes. Oh and I almost forgot — your photographs are gorgeous!