Reader question… “Is it really possible to freeze whole raw tomatoes for winter salads and have them be almost like fresh? I keep seeing instructions for doing this but the tomatoes I froze raw and whole last year were a watery mess after they were defrosted.” –Ava H.

The answer to your question is yes and no… yes, it is possible to freeze whole raw tomatoes… but no, after they thaw the tomatoes will not be like fresh tomatoes (as so many people seem to be implying). Most whole tomatoes are 93 to 95 percent water… Roma tomatoes have less water, about 85 percent… but unfortunately, all frozen tomatoes collapse into a lot of liquid and a surprisingly small amount of mushy pulp after they have thawed. 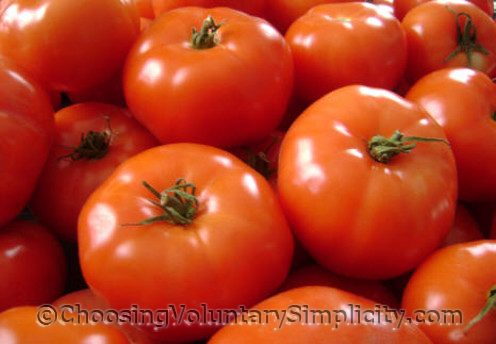 Some people recommend eating the previously frozen tomato while it is still in a half-frozen state. Others suggest freezing slices of raw tomato (instead of the whole tomato) and eating them in the same half-frozen state. It’s true that the uncooked tomato pulp will have a fresher taste than a canned tomato, for example, but the texture and aesthetics of a previously frozen and defrosted raw tomato will certainly be very different from a tomato that has not been frozen. Your experience was very typical, I think. 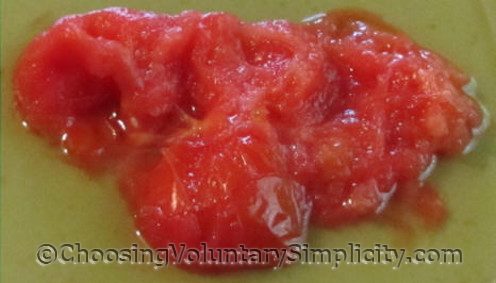 Have you tried holding over green tomatoes so they ripen during the winter months? Tomatoes ripened this way really DO taste almost as good as tomatoes fresh from the garden.

I actually thought I had done something wrong because I read where someone said he had frozen whole tomatoes and used them in salads and they were just the same as fresh. When I tried it I was very disappointed so I’m glad I’m not alone in thinking this is not the greatest idea.

I prefer to make puree or sauce and freeze that. I don’t even think the frozen whole tomatoes are as good for soups or other cooked dishes because they take up so much more room than the sauce or purees. I have wondered about the frozen tomatoes in salads too.

due to weather, we ended up with lots of green tomatoes at season’s end last year, and I was shocked at how good they were ripened in brown bags over time. I look forward to seeing your link, in case you’ve discovered a better method!

Well I wish I had read this last year before I actually tried it. I had read that frozen tomatoes will thaw out to be as good as fresh and had all sorts of ideas of salads in the middle of winter. Unfortunately all I ended up with was juice and a little pile of mush! Your suggestion for ripening green tomatoes makes a lot more sense and that is what I will be doing this year. I truly appreciate the work you do on this blog, it is an oasis of common sense on the internet.

I agree — make sauce or something but don’t freeze them whole thinking they will taste like fresh — because they won’t. I froze 30 beautiful tomatoes last fall and was terribly disappointed with what I ended up with. It would have been a far better use to have made them into sauce.

I always grow an abundance of cherry, grape or plum tomatoes. I freeze them and then, throughout the year defrost, put in food processor, and then cook down for a wonderfully vibrant red sauce. I mix the sauce with homemade pesto for a rustic and very flavorful pasta sauce. Not sure if it would work as well with larger tomatoes. With the small varieties, we don’t mind the skin or seeds.

Last year I had an abundance of green tomatoes,living in Wyoming, you never know when the first frost will hit. I have tried putting them in beer flats and letting them ripen, only to find they sometimes mold, get mushy, or don’t ripen at all. So, last year I cut the stem that the tomatoes were on, and put them in a plastic clothes basket to ripen. They ripened beautifully, and I was still canning tomatoes at the end of October. I will definitely use this method again!!

I find that if I put a mild solution of 5% bleach and water on the stem of a green tomato (I just use a cotton swab)and wrap them in newspaper I have very few tomatoes that go bad while they ripen. This method is supposed to stop mold and rot. Seems to work for me.
I will never freeze tomatoes again. They take up too much space in the freezer.