Home » Simply Personal » Tomatoes From My Garden On Christmas Day

Last year on Christmas Day we actually ate fresh tomatoes we had picked from our garden. Our garden was under several feet of snow at the time and the temperatures outside had stayed below freezing for days… making those last four delicious tomatoes even more of a special treat.

It is surprisingly easy to extend the fresh tomato season by delaying how fast those green tomatoes left after the first frost ripen. There are many ways of delaying ripening, but the most effective way is to wrap each green tomato individually in paper and keep the wrapped tomatoes in a very cool and dark place. I have one small room that is not heated… the heat from the rest of the house keeps the temperature there cool but not too cold. This is where I put the wrapped tomatoes, stored one layer deep in open cardboard boxes or sometimes in baskets, in the closet with the door shut so they will stay in complete darkness. 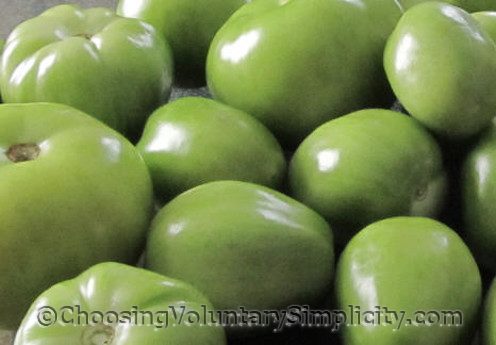 An even easier way that will have the tomatoes ripening over a six to eight week period is to just spread the green tomatoes out on a flat surface large enough so no tomato is touching another tomato. Even a large box or several smaller boxes will do, but it’s important to keep the tomatoes very cool and to cover them with a cloth or newspaper to keep out the light. It just takes a few minutes to remove the cloth, check each tomato, and remove any that are ripe and ready to eat or any that have developed a spot of rot.

I use both methods. For most of my green tomatoes, I just spread them out and cover them, and I check these tomatoes every day until they ripen. But I also pick out some of the biggest and nicest green tomatoes… usually about two or three dozen… and I wrap these beauties in paper because I have found that by wrapping some tomatoes individually, I can greatly lengthen the ripening period. The tomatoes I was able to save until Christmas were the very last of the wrapped ones but were probably a one-time achievement. The tomatoes that are just spread out and covered will ripen more quickly, depending on the degree of ripeness when they were picked.

How do tomatoes ripened this way taste? Well, ALMOST like tomatoes just picked from the garden… and so much better than any tomato bought in the store.

Wow! That is amazing … never thought of that before. Right now, I’m just praying that my tomatoes will actually grow. :)

I heard this recently from an elderly friend and wondered how well it would work for me.I do remember she also said the tomatoes could NOT be kept in the same room as the apples. Apples give off gas and ripen things faster than you want them to. Must try this.

I just weighed my first tomato. One pound 7 ounces! It is a Mortgage Lifter. This tomato has an interesting history. Google it if you are curious.

Anyway, I am grateful for this idea of saving tomatoes as I got a bumper crop this year with lots of green ones just getting going. And a nice cool room to store them.

Thanks for the tip!