Home » My Country Gardens » How Do You Suppose THAT Happened?

It began with finding a total of eleven rather small and somewhat spongy potatoes in a large bag of just purchased russets. Each was showing an impressive number of eyes and tiny sprouts. It was already July… much too late in our short growing season to be planting potatoes… but…

I decided to plant the potatoes whole instead of cutting them into sections and waiting the extra days for the cut portions to heal over. For two weeks nothing happened. Then the plants started to show… and they grew and grew and grew. We kept adding more of the composted “black soil” leaf mold.. and eventually even side supports to help keep the vines covered with the leaf mold as they grew. When the vines got to be nearly five feet high, we gave up and just let them grow. 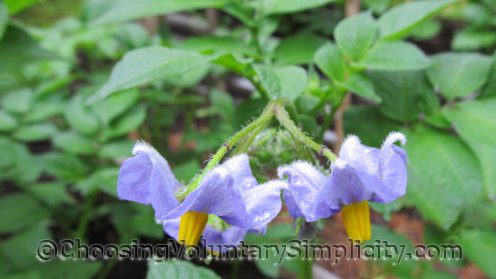 By this time the vines had produced an abundance of beautiful blue flowers and multiple clumps of tomato-like “berries.” People who knew about growing potatoes warned us not to expect to find any potatoes under those massive piles of leaf mold, and that so much lush foliage and so many potato berries were sure signs that no potatoes were being formed.

We dug the potatoes a few days ago… 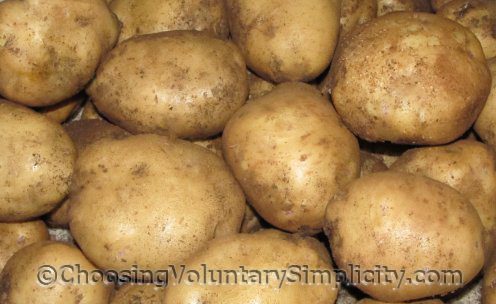 The majority of the potatoes weighed between eight and ten ounces. A few weighed between six and eight ounces. We didn’t include anything in the count that was smaller than six ounces.

So how many six to ten ounce potatoes did we get? A grand total of one hundred and thirty-one!

How do you suppose THAT happened?

What a lovely crop! Serendipitous harvests are such a happy bonus :)

Holy moly! That’s awesome! I had a similar situation with a cucumber plant growing in my compost bin. I left it alone and it produced the best cucumbers we’ve ever grown.

This is amazing!! Did you just cover the potatoes with your leafmold and I’m curious if you used fertilizer as well. I have tried growing potatoes with straw and another year with sawdust. The yield was not impressive.

Grant, yes, we covered the potatoes with several inches of leaf mold each time the vines grew past a certain point. Before we planted the potatoes we also put down a thin layer of leaf mold. We did fertilize by roughly measuring the amount of leaf mold, adding the recommended amount of organic fertilizer, and mixing it in a wheelbarrow before we added it to the garden. The vine growth was so lush, we thought we had probably added too much fertilizer for potatoes, but I think I would do the exact same thing another year. I think the very, very deep leaf mold is the reason so many potatoes were formed this year. We also kept the leaf mold well watered.

What can I say except w-o-w. My inlaws always grow potatoes directly in their compost pile. I’m not absolutely sure how they do it but I think they just put the potatoes in and rake the compost over as they grow. The potatoes grow very very well.

Save those berries (seeds) if you haven’t tossed them already. Maybe you can develop your own strain of potato. Wouldn’t that be cool? Those are some fine potatoes you grew. My volunteer potatoes didn’t yield much in tubers and nothing in seed. Bummer! Next year, leaf mold! I have to resort to taking the bags of leaves that other people put out on yard waste collection day; I have no large trees in my tiny yard. I don’t take grass clippings, though. You never know what kind of poisons folks have applied to grass…