Home » Growing Hostas / Voluntary Simplicity » How Many Days After the Last Snow Melt Should Gardeners Begin to Look for Hostas?

Reader question… “So one has hosta… and one has winter. My question is a bit more complex. In theory how many days after the last of the snow melt should gardeners begin to look for ‘hosta spears’ to come up? Is there a good time rule to use to begin to hunt for hosta?” –MstrPBK (an obsessed hosta grower…)

I would guess that this is one of those questions that doesn’t have just one answer. I think it has to depend on how deep the snow was and if there was ice under the snow… what the air and ground temperatures are after the snow melts… and of course the type of hosta. Some of my hostas always show up early, others don’t even send up their first eye until the early hostas all have fully unfurled leaves. And of course it also depends on the obsessed hosta grower… and just how eager he is to find that first shoot.

However… I CAN give you an answer based on what is happening here this spring. We’re in zone 4 and this past winter was an especially harsh one… supposedly one of the coldest and snowiest winters on record. As recently as two weeks ago we still had more than four feet of snow on the ground. Only the shoveled paths and the plowed road showed any hint of bare ground. I think most people were resigned to a very late spring.

Then we finally started getting temperatures above freezing. First only in the high 30’s and low 40’s, then a heat wave of 50’s and 60’s. The snow was melting everywhere at an astonishing rate.

Just two days ago, there was still some snow covering the gardens where my hostas grow. Yesterday’s warm temperatures and sun saw the end of that.

And this morning THIS obsessed hosta grower was out there poking around in the mulch, feeling for the hard nubs just under the soil that are always the first sign that the hosta eyes will soon appear. Most of the mulch is still frozen, but in one especially sunny spot… can you see what I found? 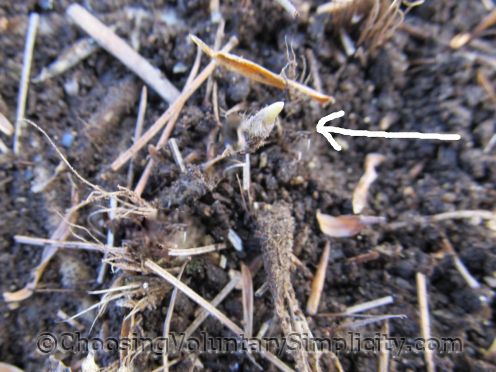 One tiny hopeful hosta shoot growing where just two days ago there was snow.

So I guess my answer to your question would have to be… with some hostas, anyway… just as soon as the snow has melted!

Electric Rates, Appliances, & What They Cost To Operate

What Are We Dealing With Here?

I admit I was skeptical. I have only 2 hostas but our snow has been gone less than a week and I didn’t think I would find anything. Sure enough I can feel sharp points just under the surface of the soil. I’m using your hint. I never did this before but both of my hostas are alive.

Love your hosta posts and your photos of your hosta gardens. I wish I could see them in person. I only recently became interested in this wonderful perennial and have a lot to learn. I find your site extremely interesting and informative. Keep up the impressive work.