I’m Sure There’s a Story in There Somewhere

All through one fall and winter our bird population was almost non-existent. Hours and sometimes even a couple of days would pass and we wouldn’t hear or see even one bird. The outdoors felt empty and way too quiet… we had never realized before that the bird sounds were such a big part of “normal.”

Then one day in early spring the bird feeders were suddenly crowded with birds again. The birds were back… lots and lots of birds. We’re used to feeding large numbers of birds but now there were more birds coming and going constantly than we had ever seen here before. The birds seemed to arrive in groups of about twenty, thirty, fifty. We started noticing that there was often one bird in the group that was different… like the one goldfinch in a group of chickadees and one bluejay in a group of mourning doves. Most unusual of all… with still freezing temperatures and snow on the ground… was the robin that was a regular visitor to the tray feeder, always arriving and leaving with a large group of bluejays. 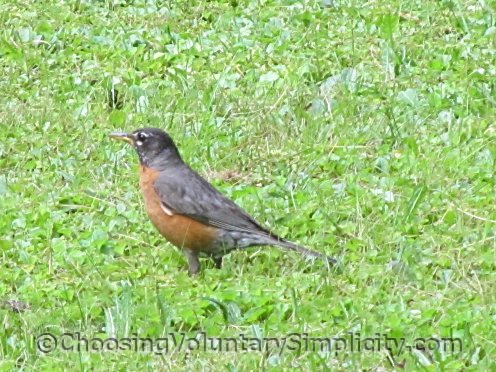 Our winter robin stayed through the spring and summer

We also noticed that some of the birds were exceptionally small, especially one chickadee that was only about half normal size. Several of the bluejays were also smaller than usual, but although many of the birds looked thin, they all seemed to be active and healthy… and they all had huge appetites.

During a period of almost four months “our” birds ate more than 150 pounds of black sunflower seeds, 40 pounds of pigeon mix, 20 pounds of cracked corn, and countless chunks of fresh suet. We filled the feeders two or more times a day and still sometimes could barely keep ahead of the demand.

We’ll never know where the birds had been all those months or why there are now so many more birds here than ever before, but I’m sure there’s a story in there somewhere. I just wish I knew what it was.

I Believe That the Very Purpose of Life…

Though not in the numbers you attract, our hummingbird and wild bird feeders go through similar dry spells. Sometimes a full week will go by with no activity. Then, there they are again. Being in the middle of a city I like to think our backyard is a nice break from the traffic and concrete for any bird that wants to visit.

We seem to have lost our chickadees. We’re in Massachusetts and live in a small town. Everyone is wondering where the chickadees are although I think there is the normal number of other bird types. I cringe every time I read one of those news stories about huge numbers of birds dying and the ridiculous explanations the public is being given for the deaths. It makes me wonder what is really happening.

Is it possible that “your” birds were caught up in similar bird deaths to the ones we’ve been seeing in the news recently? I wondered because of the great number of birds that came back. Great post and it’s wonderful that you are providing food for so many of these wonderful creatures.

We had a similar thing happen starting late last year but the problem is our birds aren’t back yet. I hope we get our birds back the way you did. I know just what you mean about the birdsong and the outdoors feeling empty without it.

By the way – I think I must be your biggest fan. I spend so much time here reading your wonderful inspiring articles. Thank you for this wonderful site.

I noticed for the new “House” from the trailer we have not had any birds at all. My 2 quaker parrots are calling the birds in and watching. So I will wait and see what happends here at the new place.

We have one male cardinal that comes with a flock of Juncos (snowbirds). We call him the red guard because he does not eat with them, just keeps watch. I think he is lonely.

Birds have a much harder time surviving nowadays what with all the technology that can harm them or drive them away. And the loss of habitat. I just hope the smart meters that will be installed here in Maine do not cause them to become disoriented. They are very sensitive to electromagnetic fields. And cell phone towers will drive birds away.

I keep thinking of “Silent Spring” by Rachel Carson and hope and pray we will always have birds in our lives.

Once I saw a flock of starlings feeding in a small clearing next to a stoplight (which I was stopped at). I noticed about 40 starlings and one HUGE starling in the middle of them, about 5 times the size of the other birds. I looked again and realized it was a young wild turkey! I wished I had my camera with me.