Home » Simply Personal » It Was a Very Long Night

It was a very long night. And it has been a very long day. Our immediate area and most of New England has been hit hard with snow that changed over to freezing rain during the night. We woke up shortly after three this morning to the awful sounds of trees crashing to the ground. We couldn’t see what was happening because our electricity was off… and it was completely black outside… but every few minutes there would be another horrendous crash. We had to wait until well after seven this morning before it was light enough to see what was happening outside. It was even worse than we had feared. 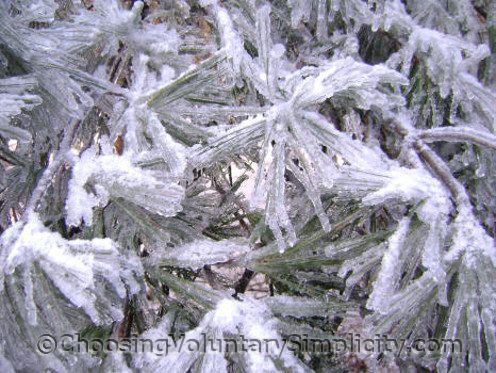 Our house and yard are surrounded by beautiful tall pines. The weight of the ice accumulating on their thick branches during the night has caused so much damage. Some of the trees are still standing but their tops are broken off. Some tree trunks broke nearer the ground. Everywhere we look there are downed trees, branches, and a covering of pine needles so thick whole areas of the snow are green. It is a heartbreaking sight.

The weather people say that there is more than an inch of ice on the trees, and the temperature is dropping now, so this ice won’t be melting any time soon. Trees and branches are still falling as I write this. We tried to go outside earlier to move some of the trees and branches that had fallen on the barn roof and against the house and back porch, but it was too dangerous to stay out there. Just a few minutes ago a big tree fell onto our fenced-in goat yard, and most of that wooden fence was destroyed.

We’re still without electricity and we’re being told to expect the power to be off until at least the first of next week. We’re managing fairly well… we have the wood stove for heat and to cook on and an outside water source available (if we can get to it). My husband just got the generator running and the freezers and refrigerator plugged in. We won’t be able to keep the generator running for more than a few hours, though, because we have only a limited amount of gasoline and we’re not sure when we can get more… there are so many trees and power lines down, many of the roads are closed, and our town has declared a “limited state of emergency.” Town officials are telling people to stay home if possible.

It’s just starting to get dark for the night, so it’s almost time to go out and turn off the generator. We’re hoping tonight is less stressful than last night and that at least some of our trees will survive.

When I Hear “Life is Hard”…

Sending you warm wishes for safety and comfort.

Your post reminds me of the ice storm I experienced back a couple years ago when I lived in the northeast. It happened at night too, and it was just like you said, it was pitch black outside so there was no way we could see what was going on. I’ll never forget those cracking sounds followed by those big THUDS, or the huge mess we found when morning finally came and we could see outside. We were still cleaning up that mess the next summer.

I’ll bet that was a long night. It sounds terrible — and very frightening. I’m glad that even though your trees were damaged that you and your family came through it okay and I hope tonight is a MUCH better one for you.

I don’t know if you’ve considered this, but you could put everything from the fridge and freezers outside in the great big “ice box” to keep it all cold = no gasoline required. :-)

I hope everything is good for you and everyone affected by this awful storm.

I bet these are the times that you’re grateful you’ve chosen to live a life of simplicity. Imagine if you didn’t have that woodstove for heat and cooking. I’m sure it will still be difficult to go a few days without power, but it seems you’re well equipped to handle such emergencies. I hope the damage is minimal, and that you’re on your feet again soon.