It was a strange summer. This was the year when New England gardeners learned that no amount of expertise or hard work could overcome the weeks of constant rain and too cool temperatures that began in early June and continued on until the end of August.

Then we reached the first week of September and the cold and rain we had become so resigned to abruptly came to an end. Suddenly every day was warm and sunny… and we had week after week of absolutely perfect weather without any rain at all. It was like being handed two unexpected gifts… the long-hoped-for gorgeous weather and extra outdoor time. 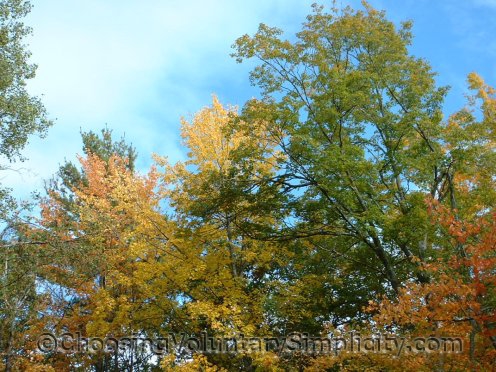 We have been spending as much time as possible outside, and we have been working… HARD. All the gardens have been weeded, uninvited perennial “volunteers” have been moved, seed heads have been cut off, whatever needed to be trimmed has been trimmed, and a layer of bark mulch has been spread on all the garden paths. One thing that especially pleases me is that we have even had time to create another large garden for all the hosta seedlings that will need to be transplanted next spring and mulch it heavily with a thick layer of leaf mold. This garden is something I have wanted (and needed) for a very long time.

We had thought we would have to wait until next year to paint the shutters and the porch, but that job is also now done. We replaced gutters and the window glass that cracked during our last violent thunderstorm. We built a small “shed” for the recyclables and collected small pieces of pine for kindling. We have been insulating and weatherstripping and stocking up on hay for the goat and shavings for the animals’ bedding. We have moved the bird feeder to its winter location. My husband has fixed a snowblower he thought was beyond repair, and I have planted tulips and daffodils and brought in the herbs I want to keep growing inside this winter.

Despite the weather, we still had a nice summer… but we have had an absolutely amazing fall. Today the sky is a bright blue, the sun is shining, and some trees are colored so vividly, they look like they are on fire. It is colder today… actually the air feels quite crisp… but it is just the perfect weather for the pot of soup that is simmering away on the wood stove!

They May Forget What You Said…

It’s funny but your summer experience pretty much mirrors mine. I had big plans for the summer but they all got rained out. Actually we got so much rain that even on the days when it wasn’t raining the ground was way too wet to do anything outside. My garden was a total loss. On the other hand this fall has been very nice. The weather hasn’t been like summer but it’s been warm and dry and it has been a pleasure to be outside doing those chores that just didn’t get done before. Now I just hope we get a mild winter!!!

I was born and raised in eastern Canada but have lived in Texas 19 years. I sooo miss a “real” fall. Enjoy it. And your gorgeous tulips and daffodils in the spring.

Do you get many violent thunderstorms like that? Sounds NOT good.

I love the fall colors… the months and months of snow and cold not so much… but the snow can be really beautiful too.

Yes, we do get some very bad thunderstorms here. We’re sort of in a valley surrounded by mountains, and the worst storms seem to stay right over us for a long time. We’ve had some bad experiences with lightning strikes… not hitting the house but hitting trees very close to the house. The window glass just suddenly cracked (making a terribly loud noise) during a particularly bad storm… probably something to do with the air pressure. As you might have guessed, I really, really don’t like thunderstorms!

I just wanted to let you know that I really enjoy your writing. Fall is beautiful, if less colorful and more rainy here in the pacific NW. And soup, yes it is soup weather and handicrafts weather and apple sauce weather.

Hi Shirley,
So funny the differences in our weather which is Florida vs NewEngland! We are SOOOOOOOOOOOO happy that we have finally had some cool weather. It has been in the 40’s the last few days at night and we were able to open the whole house up and let in the cooler cleansing air. We have been living in the AC since about April. It is so amazing to me to see all the people out now riding their bikes and walking their pets etc. I always marvel at the amount of people that do live here in NW Florida (the panhandle) that we do not see all spring and summer. Then like magic folks start to appear out and about. We pray for cool and you all pray for warm…isn’t life funny sometimes!

dear shirley, just happened onto your site while looking for info on hostas…..boy do you have a neat blog…a little of everything and it is all interesting, have been on it almost 2 1/2 hours and still reading…i live in wny betwenn buffalo and erie, so our winters are similar…i agree i wished i liked them better too [62 of them so far]… :-) but we need it for our changes to spring flowers thru our fall leaf changes…by the way the photos you take are beautiful….hope the telephone carrys thru on their promise quickly …. best of a life to you oldfrogg