This isn’t what it looks like. The frog peering through the grass isn’t sitting at the edge of our little pond. It’s actually sitting in the standing water near our meadow garden.

We’ve broken records for rainfall frequency and amounts during the last several weeks. During the local news this morning the weather person said that this area has had only two days without rain during the last seven and a half weeks. We’re actually wondering when that second day was because we can only remember one day recently when we didn’t get at least an hour or so of rain! 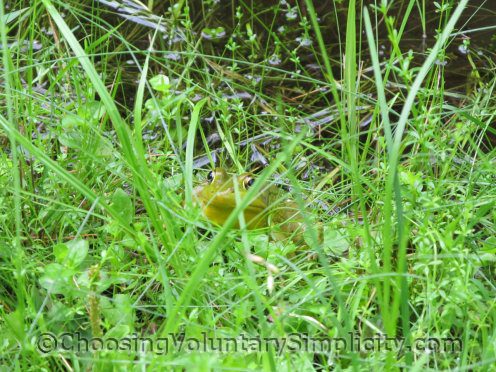 We’ve had thunderstorms… usually several every day… sometimes extremely violent thunderstorms… with torrential rain during the storms and continuing for an hour or so before and after. In between the storms there is bright sunshine with extremely hot temperatures and almost unbearable high humidity.

Everything that shouldn’t be growing… like the weeds and unmowed grass… looks lush and out of control. The vegetable plants in the gardens are struggling just to survive all the rain. The only exceptions are the plants in the garden areas located in our already too-wet meadow.

We find ourselves with an unexpected problem this year. The clear-cutting our neighbors did to the land on the mountain above us last spring and summer means that every time there is a heavy rainfall, water literally surges down the mountain, floods the brook flowing through our meadow and leaves a distressing amount of extra water behind. 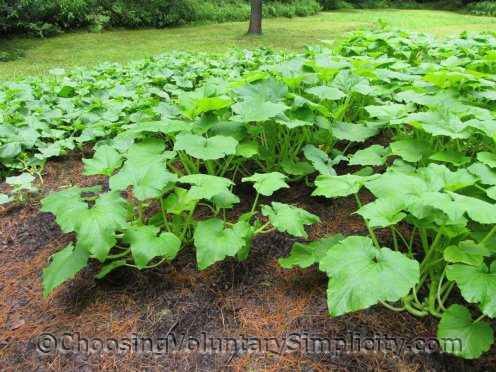 We almost didn’t plant anything in the meadow this year because the soil was so alarmingly saturated, but the meadow has become the place where we grow the best cucumbers and squash and we convinced ourselves that the constant rain couldn’t last much longer. Expecting anything to grow there this year seemed like a really dumb idea… but we decided to try. We brought in lots and lots of “leaf mold soil” to further raise the level of the actual growing areas up and away from the wet. The non-growing areas of the garden were so wet, we sloshed everywhere we stepped.

We planted the seeds in the raised mounds… and then we had almost a week of steady rain and really cold temperatures… and no sun at all. We expected all the seeds would rot, but from the number of plants it looks like practically every seed we planted must have germinated. The plants and the garden look impressively beautiful. All the plants are huge and have loads and loads of tiny squash and cucumbers forming. 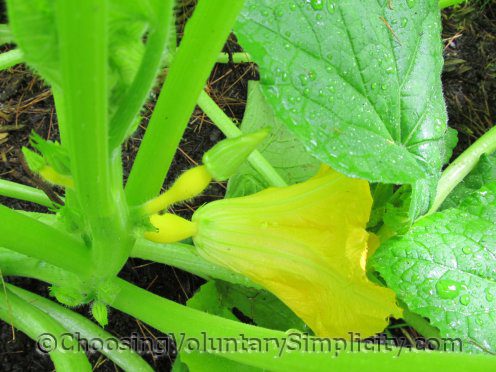 Surprisingly, the squash and cucumbers we planted in other… drier… non-meadow areas haven’t even blossomed yet and those plants look awful. We’re not alone… many people in this area have completely given up on trying to have a productive garden this year.

Written by Shirley Filed Under: My Country Gardens, Simple Living

When Wild Turkeys Come to Visit

We are experiencing the same ridiculous level of rain. Last year at this time the ragweed was dying for lack of water, this year everything is growing insanely (ragweed included). Our tomatoes are producing particularly well. Yay!!

Not quite so bad here but still way too much rain. This is one year I’m glad we’re not trying to have a garden. Yours does look wonderful though and the plants look so healthy. I think the reason they’re doing so well is because you have worked so hard despite the odds and this is your reward.

I’m a new reader. I just found your blog 3 days ago and I’m embarrassed about how much time I have spent since then reading through your posts. I find so much here that I am interested in or wondered about. So much information and so much fun to read too! Thank you for the best blog ever. Love ya!

Wish my garden looked like that. We’re having the same rain problem here and I really wish I would have thought to try planting in mounds. Clever thinking. I really enjoy your writing, I keep coming back again and again to read more. Keep up the good work.