From the time I was a very little girl, I have always loved sempervivums (hens and chickens) more than any other plant except hostas. My sempervivum gardens started with just a couple of plants that my mother gave me from her garden. Over time I added different varieties. All the sempervivums thrived and spread, and after several years I suddenly found myself with more plants than I had space to grow them.

We decided the solution was to plant large blocks of sempervivums interspersed with paths and rocks strategically placed to make weeding easier. As the years passed the sempervivums kept growing and multiplying, and when those gardens got too crowded, we made more. Eventually we had several gardens housing thousands and thousands of sempervivums… they were an amazing sight. 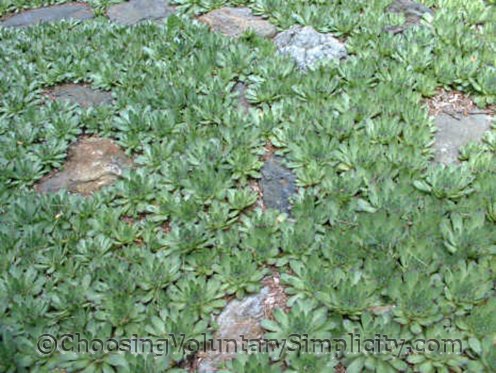 The last time I saw these gardens was on Thanksgiving Day. It was a beautifully warm day, more like late summer than late fall, and the sempervivums were still gorgeous. That weekend the temperature suddenly dropped and it snowed… HARD. After that we had snow on the ground until just a few weeks ago. 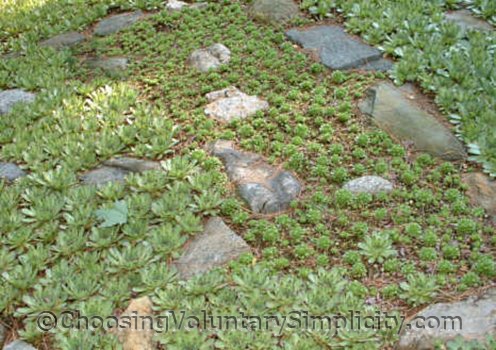 When most of that snow had melted, I did the first thing I always do each spring… I checked on my sempervivums. This is what I found. 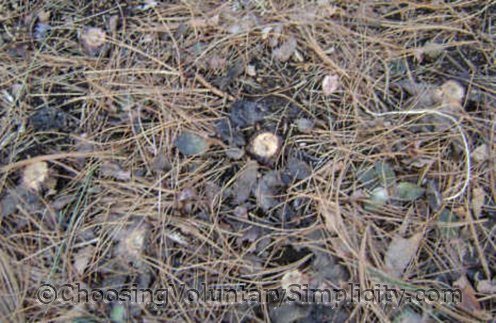 The deer had completely destroyed my sempervivums by eating them down to the ground.

These sempervivum gardens grew here for more than twenty years, and the deer have always been around, but they have never bothered any of the gardens. The damage they did this winter is devastating. Almost all of the different varieties I grew or collected over the years have been completely destroyed… the deer ate literally everything.

This spring I’m starting over again with a few plants. I’ll be adding new varieties as I can. What happened was discouraging, but I can’t give up on my sempervivums. With time and a little help from me… plus liberal applications of deer repellent… the sempervivums will do the rest.

I too love Hens and Chicks. They are very hardy and I’m sure they will come back. Why the deer would go for them is beyond me — never heard of that. What will you use as repellent?

I don’t know yet what I will use for deer repellent, although I know I want something natural and non-chemical. Maybe the hot pepper and talcum powder combination?

What a sad thing to happen. Your hens and chickens must have been beautiful and I don’t think I would be taking their loss as well as you are. You asked for suggestions for deer repellant. My mother in law puts bars of soap in her vegetable garden and she swears it keeps the deer away.

My children just gave me my first pot of hens and chicks for my birthday. They’re tiny compared to yours in those photo’s but I love them already. I feel so bad for you but I know you will make other gardens just as beautiful. Love your blog.

I don’t know about where you live but in my area, deer has lost much habitat to human development + the coyotes and wolfs who hunted deer were hunted to near extinction themselves.

I’ve only ever tried blood meal and it works for our neighbourhood squirrels. Some people swear by human hair — they get the clippings from salons but it may be tricky to hide it around the hens and chicks!

For some reason where I live the deer are eating things they have never touched before and all “resistant”. Now Any pro gardener will tell you that there is no such thing as a deer-proof plant… but my red hot pokers and irises were chewed down to the ground! The only thing they haven’t eaten are my lavender. I read a lot of natural recipes in Dr. Bader’s book and honestly, I don’t like to do alot of maintenance gardening…soap, garlic oil, but fencing (yuck but sometimes necessary to get the plants past the desireable “tender” (aka tasty)point and then removed when plants are matured is tried and true protection…and now I am planting lavender in between EVERYTHING… because I read deer hate getting it on their coats!

How devastating you must have been. I just caught a female white tail deer eating my Hens and Chicks out of our rock garden. I went out and poured red hot pepper flakes all over them. They will get a surprise when they try it again.