Home » Simply Personal » Want To Talk Bird About It?

I have a special interest in smart bird stories like the one recently where a small Quaker parrot warned a babysitter that her two-year-old charge was choking. The bird kept screaming and calling “Mama baby” until the babysitter came back into the room to find the child already blue from lack of oxygen. The babysitter used the Heimlich maneuver and the child is now fine.

Then there’s the story of the African Grey parrot in Japan. Police found the bird sitting on someone’s roof, and they took him to a veterinary clinic, where he told the staff the full name and complete address of his owners. When the police checked this out, they found that the people at this address had indeed lost their parrot. 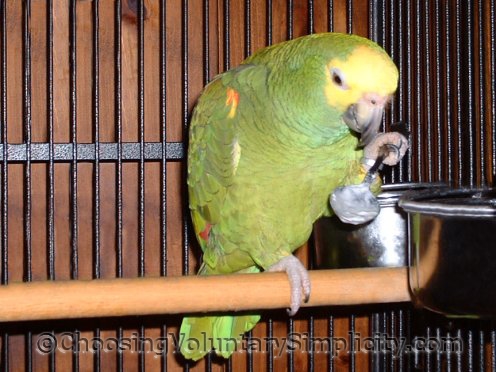 We also have a smart bird. Ours is a Yellow Headed Amazon, and this kind of bird is known for its ability to mimic human speech. For some reason this bird has decided to mimic me, and when he talks, he sounds almost exactly like I do. Some day I should take the time to write down a list of the words and phrases that he uses. I do know that the number of words and phrases would be in the hundreds, and as other parrot owners will agree, this bird doesn’t just say words… he knows WHAT he is saying and what the words mean.

He tells us when water comes to a boil in the teakettle, when it starts to rain or snow outside, when the dogs are doing something they shouldn’t do, and when someone drives into the yard. When he sees something that frightens him outside, he calls to one of us by name, followed by “Quick! Quick! Come quick!” He can even be a little manipulative by continually asking, “Don’t you love your little bird?” in a plaintive voice, or saying repeatedly “It looks good… I would like some,” when I’m cooking something and don’t offer him enough tastes. He sings opera and hymns in a beautifully clear voice and even combines lyrics to make up his own songs. He greets us at the beginning of every day with a cheery “Good morning!” and when someone leaves the house, he asks where they are going… often asking if it will be to the store or post office.

During the summer we have many, many severe thunderstorms and the weather radio often sounds the severe weather alarm. Each time he calls one of us by name to tell us about the alarm and is only reassured when he is told that everything is OK, it was just a test.

We got him when he was just a few months old, but we think he suffered some abuse before he came to live with us. He was very quiet for several months, and when he did speak he said “Bad bird… shut up!” and a few other phrases that showed us he wasn’t cherished in his previous home. It is a source of great joy to us that he never says those things any more… now his vocabulary is full of phrases like, “I’m such a good bird,” “You’re so sweet,” and “I love you mama!” He has been a part of our family for over twenty years now, and I can’t even imagine how silent and empty this house would seem without his happy little voice… or how much I would miss hearing him call when he thinks he’s being ignored… “Want to talk bird about it?”

I am so envious. I have always wanted a bird and especially a parrot but my mother is terrified of birds and she never let us near any. Since I have been married we haven’t had the money to buy a parrot but that is my dream, to somehow own an African Gray. Your bird sounds amazing.

I cried when I read this because it brought back such bittersweet memories of my cherished Amazon. His name was Pete and he was the smartest bird. People used to come in and he would talk to them and they would go away having a completely changed impression of birds and their intelligence. I agree completely, these talking birds do know what they’re saying and they do understand. Their range of emotions is very humanlike. Great post and wonderful blog. I mean this nicely but I spend way too much time here!

I have never been a fan of birds being caged, afterall, they are meant to fly. However, I ended up with a dove that had been abandoned. She too had not been treated properly but in time, she became an absolutely wonderful pet. I loved everything about her. She was funny, loving, playful; just a pure joy. She is no longer with us but I miss her and am so glad I had the opportunity to discover how incredible birds really are.

My Daddy had a bird that he whistled back and forth with. They would make up songs to whistle to each other. The big one outside would answer you if you knocked and said hello. You’d hear from the back, “Hello” and swear someone was home. I know that they both miss him greatly.

What a wonderful bird it sounds like you have.

For 20 years I had a very beloved Lilac Crown, Green Cheek or Red Head Amazon named Pepe. This bird was the closest thing I had to a child and when he passed the hole in my heart was never filled. Despite being indoors Pepe was content and loved me as I loved him. I don’t regret having him as he enriched my life as much as I did his.

My story of parrots still hasn’t ended. In 2002 my elderly parents obtained a U.S. bred baby parrot that they named Bogey (after the film legend), a Double Yellow Head with the most colorful personality and intelligence of any bird I’ve ever seen. He has a huge vocabulary and colorful personality. Sadly my parents passed within days of each other, Bogey was left to me and once again my life and our home was filled with life, noise and laughter by way of Bogey.

Amazons simply aren’t just your average run of the mill pets; they can be trying with your patience and are very temperamental. They bond to mainly one person and quite unfriendly to anyone else. Cute but not cuddly and while their intelligence is compared to a 6 year old human child, their moods are like a teenager at times and quite vocal. They are powerful birds with strong jaws, sharp hook-bills and muscular talons so caution is advised. If you’re able to get passed the downside, you’ll have the same pet for the rest of your life, so get used of it but I have no regrets.

To me, there is no better pet than a parrot. Not long after you have one you practically forget they’re a bird, especially once they start talking and answering you. They have feelings and have emotional needs which require attention; not just keeping them fed and the cage clean, but companionship is very important to their mental health. Don’t just get one and expect it to do everything on its own so pay it attention and show it love, it’ll be one of the best relationships of your life.

I know the feeling about an abused bird. I have one. First he lost his mate then 2 owners. I got him he was thin and scared to do anything. Well fat bird hasnt stopped eating and got him sholder trained again. God bless birdies!!!!!!!!!!!!!!!!

This is a wonderful story and what a lucky little parrot you have that he found such a loving home with you. He sounds like a real sweetheart. Thanks for sharing about him.

Have you heard about Alex the parrot? I just heard a story on NPR discussing him and the book that his handler/researcher has written. He proved scientifically what a lot of us know about our animals already — they really are smart.

I work at a Renaissance Faire every year, and last year I arrived early to help with some setup. I hear a wolf whistle and turn to see who is hooting at me, and come face to face with a small eclectus who was whistling and nodding to me. The owner turned from his conversation, sees me, smiles, and tells the bird “good eye!” It totally made my day. I wish I could get a parrot, but the lifespan means a huge commitment, and our life isn’t steady enough.

I too cried! and I can’t thank you enough for sharing this wonderful story.Don’t think about the silence it will ruin the full happy parts.I had no idea how smart birds are and thoroughly enjoyed hearing about your bird he sounds like a love.I was lucky enough to have a dog Sandy,she was my second daughter and has been gone 13 years and I too have a whole in my heart and always will.I have been lucky enough to have other animals pass thru my life but none bonded with me like this.I have no doubt another little soul will find me…maybe this time it will be a bird? ya never know

Love it! As my daughter would say: “there’s just something about birds. Dogs and cats are cuddly, but birds….”

Birds are among the creatures I enjoy watching and having around. I thoroughly enjoyed your story about your pet parrot. I am still smiling while writing this comment. Thanks for sharing this with others. I have also enjoyed your other blogs. They are very informative and encouraging. Once again, thanks for sharing.

It touched my heart , reading about your bird.