We’ve been busy. We spent several weeks cleaning up the incredible mess that the road crew left after their sloppy tree-cutting and trimming rampage early this spring. Incredibly, they left a portion of a brook on our property that runs parallel to the road almost completely filled in with piles of their chipped wood and small felled trees. More long piles of tree branches and more piles of cutting debris were strewn… and left… on both sides of the road. And then we spent even more time dealing with the damage that had resulted from the overflow of water that normally would have been rushing through the brook. 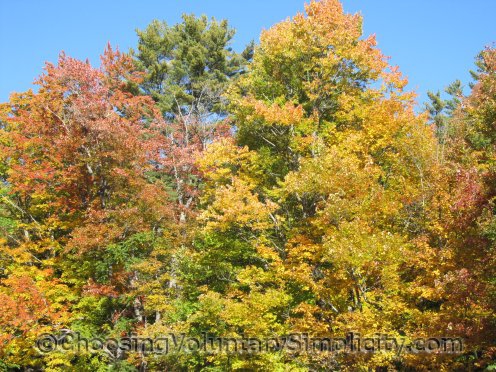 At garden planting time the temperatures were abnormally low, and because of the previous weeks of rain the ground was much too wet for planting. We compensated by planting in raised beds. Then the weather changed and for weeks and weeks the temperatures were abnormally high and this area had no rain at all. We carried water every day from a well overflow about a quarter of a mile away and managed to keep the squash and cucumbers thriving, so despite the weather fluctuations… the heat, the cold, the rain and the drought… we ended up with amazing crops of both cucumbers and squash. It was wonderful to have such abundance… I made lots of pickles and relish too.

Yesterday we finished cleaning up all of this year’s vegetable and flower gardens… the shed is full of firewood that we cut and split this spring… everything that needs to be is raked, trimmed, protected or stored. There will be more raking to do as more leaves drop, but physically it looks like we’re really ready for fall and… as much as I don’t want to think about it… the onset of winter snowstorms and freezing cold.

Emotionally… not so much. 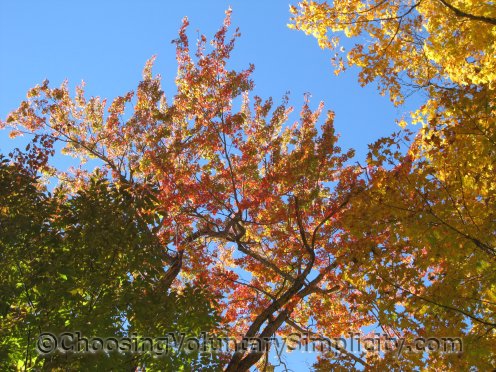 It doesn’t seem possible that it’s foliage time already. We’re just about at the point where there are almost as many leaves on the ground as there are on the trees, and the leaves are falling fast. I took these pictures yesterday when the sky was that vivid blue, the sun was shining, and the trees were especially beautiful. We had rain again last night and this morning many of those same leaves are on the ground. Oddly, we have not yet had a killing frost. 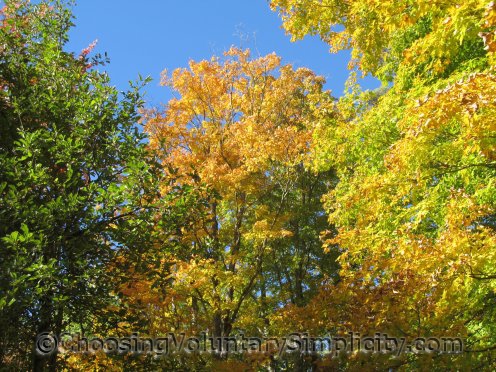 I can’t forget to tell you about two interesting visitors we’ve had just this past week. We’ve seen several bears this summer, but always at a comfortable distance. This one was just a few feet away and moving rapidly… and directly towards us. I don’t think he saw us until we saw him, and it was quite a surprise for all concerned, I think. Happily the bear changed course, speeded up, and disappeared into the woods.

And then yesterday there was a very VERY large moose… crossing the road just below that same garden. We watched the moose and the moose watched us… I was getting close enough for what I think would have been a really good picture when two cars came barrelling down the road, and judging by the yelling, honking, and swearing, neither driver appreciated the unusual opportunity for a close view of such a magnificent animal. After being nudged along and almost hit several times by the first car, the moose put on a burst of speed and disappeared into the trees.

I did get photos of a porcupine and a huge pileated woodpecker, but those are stories for another day!

Not Exactly What I Had Planned To Do Today…

My next birthday I will be 75! You wonder where the summer went? I wonder where my misspent youth went. :)
Seriously, it sounds like you have been ultra busy with lots more to do. Good luck with all that. And thank the Lord you and your husband have the ability to do it.
We don’t have bears here but we had 5 gray foxes the other night eating raw peanuts we leave down for birds and other “critters”. They are so beautiful! Then the skunks showed up. It was a riot watching the foxes try to get at the peanuts all the while keeping away from the business end of the skunks!
Oh, almost forgot, we had a wonderful crop of tomatoes this year thanks to collecting and using what little rain we had in large trash cans. We grow organic, heritage tomatoes called “Mortgage Lifters”. Most of them weighed over 1 pound. The rest of our garden we planted for the butterflies, bees and hummingbirds.
Enjoy the rest of Autumn and stay cozy and warm this Winter – Nature’s great fumigator.
Love,
Jo

That’s just the way I felt when we got the first snow here. I wasn’t ready for winter and I can’t wait until spring. I don’t usually mind winter and I think I remember even actually liking it at one time but not this year. Love the photos here. Those trees are so beautiful.

I’m looking forward to reading your post about the pileated woodpecker. I have seen them in books but never a real one.