Home » Glimpse into the Past » How To Boil a Potato Perfectly, Circa 1880

These instructions on how to boil the perfect potato are from an old book on housekeeping that was written in 1880 especially for a new bride or beginning cook.

I especially enjoyed the author’s disclaimer:

“Each receipt has been tested personally by the writer, often many times; and each one is given so minutely that failure is well-nigh impossible, if the directions are intelligently followed.”

“To be able to boil a potato perfectly is one of the tests of a good cook, there being nothing in the whole range of vegetables which is apparently so difficult to accomplish. Like the making of good bread, nothing is simpler when once learned. A good boiled potato should be white, mealy, and served very hot. If the potatoes are old, peel thinly with a sharp knife; cut out all spots, and let them lie in cold water some hours before using. It is more economical to boil before peeling, as the best part of the potato lies next the skin; but most prefer them peeled. Put on in boiling water, allowing a teaspoonful of salt to every quart of water. Medium-sized potatoes will boil in half an hour. Let them be as nearly of a size as possible, and if small and large are cooked at the same time, put on the large ones ten or fifteen minutes before the small. When done, pour off every drop of water; cover with a clean towel, and set on the back of the range to dry for a few minutes before serving. The poorest potato can be made tolerable by this treatment. Never let them wait for other things, but time the preparation of dinner so that they will be ready at the moment needed. New potatoes require no peeling, but should merely be well washed and rubbed.”

–from the book The Easiest Way in Housekeeping and Cooking,
written by Helen Stuart Campbell (published in 1880) 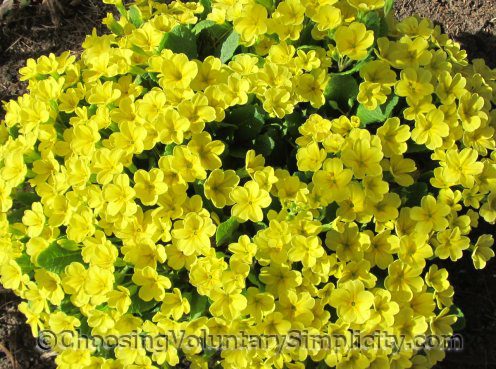 It’s So Cold Out There!

An Easier Way to Wash Dishes

I love the photos you label as gratuitous and yes, I would much rather look at the primroses than potatoes. Please keep sharing your photographs with us. Those primroses are beautiful btw.

I wish things were as black-and-white today. I actually prefer very detailed instructions and step-by-step directions. The attitude now seems to be there is no right or wrong way, you just do it, and I think people are missing out on alot if they follow that direction. There is a right way to most things and knowing how to do something corectly is worth alot.

Love the 2 p’s and the ‘gratuitous’ photo. Also this blog. It is a wealth of information and interesting reading. And enjoyment too. Keep up the good work. I come here every day.

That writer’s disclaimer is priceless!! I can almost feel her restrained frustration that some people can’t (or won’t) follow even the simplest directions. Interesting read here, thanks for sharing.