One of my favorite birds to watch is the white-breasted nuthatch, Sitta carolinensis. These small, delicate looking songbirds have a very large head, a long bill that turns up slightly at the end, and a short tail. They have a solid white breast, jet black eyes, and a completely white face except for a thin dark line at the outside corner of each eye. They have bluish-grey feathers on their backs, a black or grey cap, and they often have areas of a rich chestnut color under their tails. White-breasted nuthatches are the largest nuthatches in North America.

White-breasted nuthatches mate for life. Nests are built entirely by the female, usually in naturally occuring holes in trees, and are made from grass, bark, feathers, and even dirt. Between five and nine eggs are incubated for about two weeks, and the young birds stay in the nest for almost a month. 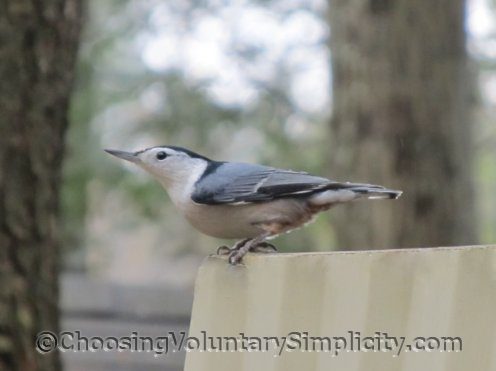 What makes nuthatches so much fun to watch, though, and so easy to identify, is their agility and their distinctive way of hopping around on the bark of a tree… and the way they point their heads straight down and walk headfirst down the trunk. 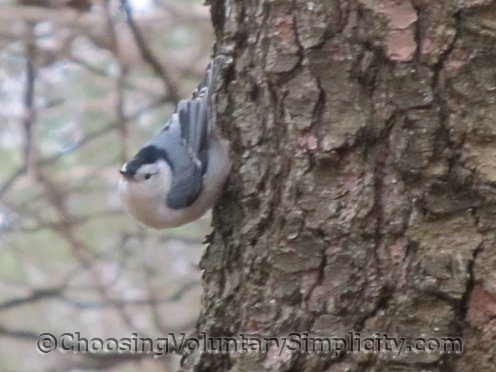 Nuthatches live at the edges of woods and in open areas that are surrounded by trees. In the wild they eat many types of insects, from spiders to caterpillars, but they also eat seeds and nuts (and supposedly even acorns, although I have never seen this). 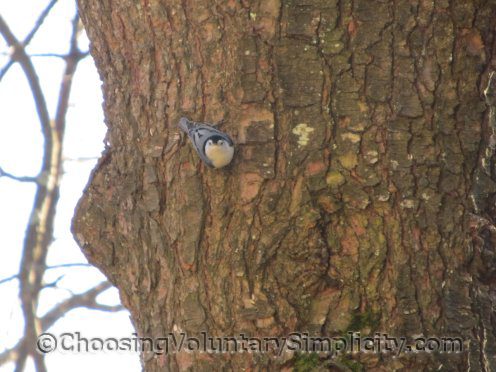 Nuthatches often come to our feeders with groups of tufted titmice and chickadees, and they are obviously very territorial birds, often driving even the large bluejays away from the feeding tray. 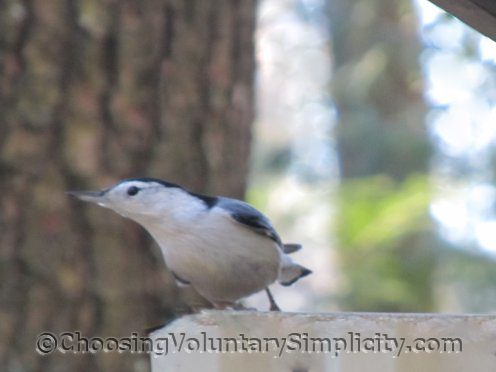 Nuthatches seem to prefer suet and the black sunflower seeds, but we often see them flying away with a large seed or piece of corn in their beaks, which they hide under the bark in a large nearby tree. 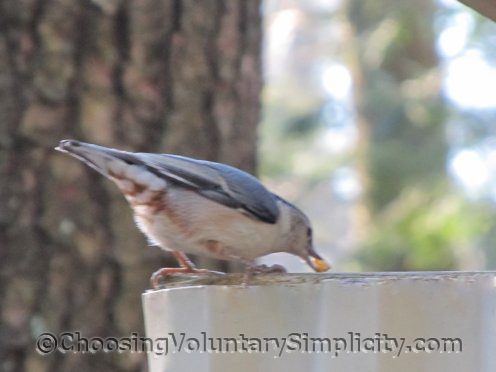 The oldest known white-breasted nuthatch lived to be almost ten years old, but their natural lifespan is only two to three and a half years. 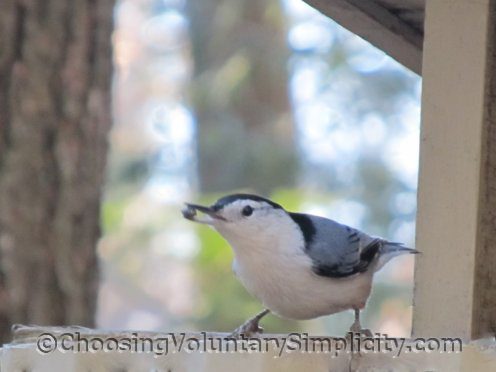 One of my favorite birds, too! They have attitude and spunk and they are absolutely gorgeous!

By my bedroom window, we have a heated birdbath and you should see the nuthatches, titmice and chickadees come down to get their drinks. When it is so cold and dry, this water is very important so they don’t get dehydrated. The only bird that never visits the water is the Junco, another of my favorites. Well, I guess ALL birds are my favorite things.

I think nuthatches hide food under bark to entice insects, which they love. We make sure they have plenty of dried mealworms mixed in with their seeds and suet.

Of all God’s creatures, birds are His special gift to us and we must take special care of them.

They love dog food too. They and the Titmice and Red-bellied Woodpeckers raid our automatic dog feeder all day long!

I must start feeding the birds. Your photos and stories are so interesting – I can see I’m missing out.

Cute photos! I especially like the ones of the nuthatch coming headfirst down the tree. I think I have actually seen this bird but I didn’t know what it was. I really enjoy your wonderful blog. Thanks for all the work you do on it.