The red wild columbine (Aquilegia canadensis) is a member of the buttercup family. This perennial wildflower is also sometimes called rock bells because of its bell-like flowers, and it looks somewhat similar (although not as showy) as the garden columbines. The flowers are bright red and have five tubular petals that droop down instead of facing up, and the showy yellow stamen hangs down even lower.

Wild columbines like shady, rocky areas and often seem to be actually growing out of a rock or from underneath a rock (which explains why they grow so well here!). The plants grow up to three feet tall and have a fragile, spindly look, with leaves growing in groups of three. 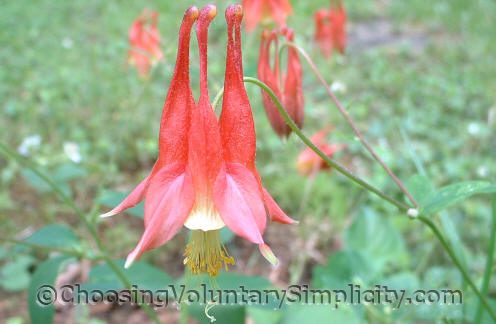 I remember calling these plants honeysuckle, and as children we used to bite off the little rounded tips of the flower petals and suck out the sweet honey-like nectar inside. Hummingbirds, bees, and long-tongued insects like this nectar too. 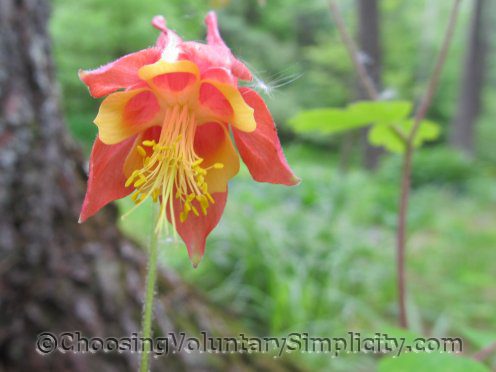 Red columbine can be cultivated, although all of the red columbine I have here are growing wild. One interesting point is that if red columbine is given rich, loamy soil, it will produce striking flowers, but its life will be short. 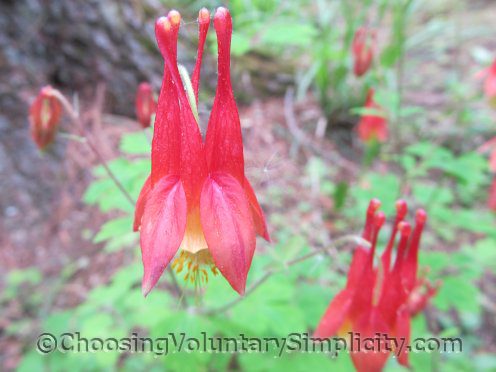 In its natural rocky soil, it will live for a long time but will produce fewer and smaller flowers, even if the soil is fertile.

Sempervivums in Shades of Red

These are one of my favorite flowers, but I’ve never gotten more than one season out of them. They don’t come back and don’t reseed themselves at my property for some reason. Still I love them!

I want some of these! I see white and purple here ( and sometimes yellow ), but not a lot of red.

I grow columbines and love them. I have not seen one like this but it sure is pretty. Thank you!

We always called these plants honeysuckle too. I haven’t seen one for years, so thanks for the wonderful pictures and for rekindling a memory!

Thank you for this post. I have these coming up in between perennials in a garden at our new (old) house. I didn’t know what they were but thought they might be some kind of a columbine because of the similarity to the cultivated columbines. I’m glad to know for sure. Last year there were just a few of these but this year there are probably 20. They’re a nice burst of color in with the other perennials.

Years ago my neighbor gave me seeds from her red columbines that came originally from her family’s home in Maine.

Every year, I sprinkle the seeds in new places. This year, I have GIANT red and yellow flowers springing up all over the back mountainside.

They are so pretty and inspiring – their vibrant color, their daintiness, the fact that they are the first columbines to come out every year.

About a week after the red ones blooms, the pink, fuscia, purple, lavender columbines opened… they are all spectacular, but I must admit, seeing the red ones always make my heart leap with an extra special joy!

I have a columbine this year that looks just like this, but I don’t where it came from. I’ve only ever had the common purple garden columbine other than one year when I planted some of the Melody variety. Those only lasted a year or two. I’m stumped at how this one appeared in my flower bed, but thrilled! It’s gorgeous. As a New England girl, I love these posts about plants/flowers in my backyard. I’ve learned a lot from them.