Like many of the plants in my gardens, my collection of chives began with a tiny clump that my mother gave me many years ago. Over the years that one clump has somehow multiplied to become at least thirty large mounds of chives… and despite my efforts to keep any of the chives from reseeding, I keep finding more new baby chive plants growing in the open areas between the mounds.

Obviously chives (allium schoenoprasum) are extremely easy to grow and require very little attention or care, and they are so cold hardy they can be grown in our zone 4 temperatures without any winter protection at all. I have found that chives grow best when they get a lot of sun and when they are grown in soil that contains lots of organic matter. I never use any additional fertilizer. 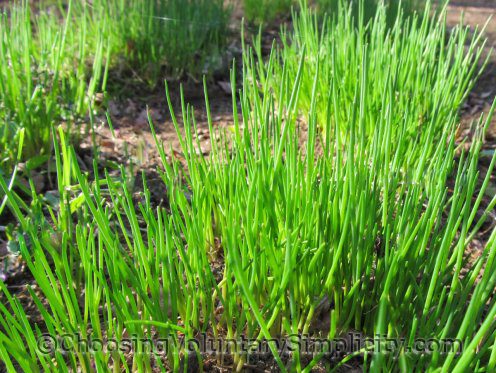 New growth in the spring

We give all the chives a thorough weeding as soon as the new growth starts appearing each spring… mostly to get rid of any grass roots that might be embedded in the clumps. As soon as the soil temperature becomes warm enough, we add a thick layer of mulch. And later on in the summer when the chives start to look too tall and ratty, we use scissors to cut them down almost to the ground… the chives grow back in a surprisingly short time. 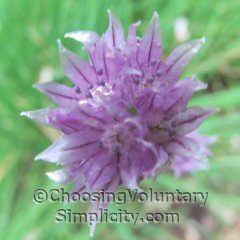 Notice the round black seeds

Onion chives have long narrow hollow “leaves” and lavender flowers. Both the leaves and flowers are edible and are described as having a mild onion flavor. I don’t like the taste of raw onion… AT ALL… so I may be somewhat prejudiced… but to me the onion taste is anything but mild. Chives have the best flavor when they are freshly cut, and they can be dehydrated. I have read that they can also be chopped and frozen although I have not tried that.

I also have a second type of chives called garlic chives (Allium tuberosum). These have a pleasant (not overwhelming) garlic flavor that I do like. The leaves of this variety are flat and the flowers are white. I have found the garlic chives to be sligtly more difficult to grow, but these clumps too keep increasing year after year.

My entire lawn is full of chives! They were there when I purchased my home, so who knows how long they’ve been there. I just mow them along with the grass. I tried eating them once, but didn’t care for their flavor.

I bought some chives at the farmer’s market last year, I kept them in a small pot. I intened to through them away at the end of the year but didnt get to it. They are now growing great guns, and they were never planted. They survived the winter unprotected and in a pot. Our winter in Iowa was mild but we had snow and cold weather for weeks. I would say they are very hardy.

A neighbor introduced me to chives when I was little, so they’ve always had a special place in my heart. Also lavendar; she taught her daughter and me how to dry lavendar and sew little sachets. Oddly, I now realize I have never had either of these plants in my own garden!