We have two apple trees nearby that are literally loaded with apples this year. Last night I made a pie to see if these apples are ready for picking, and they are… so now I guess it’s time to start freezing apples for fresh-baked pies for the months ahead! I use a really easy method… I just line a pie plate with aluminum foil, layer in the apples, sugar, spices, etc. and freeze. Decide beforehand, though, what pie plate you plan to bake your apple pies in, or you’ll end up with a frozen pie shape that doesn’t fit your crust!

I start with two large pieces of foil (wide enough to extend past the edges of the pie plate and long enough to fold up over the apples) and seam them together on the long edge with a triple fold. Then I place the foil in the pan with the seam running down the center and mold the foil to the shape of the pan. Then it’s simply a matter of slicing the apples and arranging them in the foil-lined pan, and continuing to “make” the pie. The only difference is that I’m making the pie inside the aluminum foil instead of inside a bottom crust. 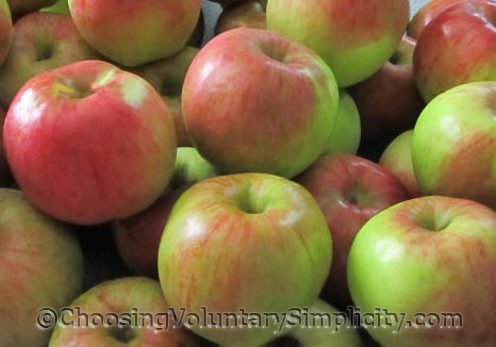 I package these wrapped fillings in plastic freezer bags. Later, when I want to make a pie, I make the bottom crust as usual and sprinkle it with sugar… this keeps the crust from becoming soggy. Then I add the frozen apples (if you used the same pan the frozen shape will exactly fit your pie crust), add the top crust, and bake. The apples should be frozen when the pie goes into the oven.

I use the regular oven temperature and bake the pie as usual, but I allow extra baking time because of the frozen apples. I find it works well to put a sheet of aluminum foil loosely over the top of the pie for the first part of the baking time to avoid over-browning.

Sempervivums in Shades of Red

There is a Place That YOU Are to Fill…

This is such a great idea! I buy two bushels of apples every fall and I have been cutting them up and partially cooking them for pies before freezing. I’m going to try your method. It sounds so much easier!!!

Thanks for sharing this really cool idea.

I love this idea! I’d been wondering what I could do to try to save some of the abundant fruit… I bet this will work with peaches, too.

I think this method would work great with peaches. I don’t think you would have much of a discoloration problem either, but you could always dip them in a lemon juice solution if you were concerned about the peaches darkening. I never bother to do that with the apples, and they stay pretty much a light color.

Maybe you can’t answer individual comments, but if you can: why don’t you want the apples to thaw using this method? They will be mushy if they do?? Won’t baking them in the pie make them mushy anyway?? I was thinking of filling a freezer bag with the seasoned, cut up apples and freezing–then letting them thaw a bit and pouring them into a prepared pie-shell. No good??? Thanks!

Jean, sure, I’m always glad to answer questions if I can. The reason for not wanting the apples to thaw is because when apples have been frozen and allowed to thaw, they will exude an amazing amount of water. If you add all this water to the apples in the pie, you will have soggy crust and a watery pie. If you let the apples thaw and pour the water off, the apples won’t cook up with the right texture. However, if you bake the frozen apples in the pie crust, somehow the heat takes care of any moisture, and a pie baked from frozen apples is equally as good as one cooked from fresh. The pie crust will not get soggy if you don’t let the apples thaw. You asked if the apples will be mushy… again, not if you keep the pie filling frozen.

If you want to freeze the apples in a bag, you can do that and still keep the apples frozen when you put them in your pie. Even though the apples are frozen, the pieces will separate easily if you whack the bag of apples against the countertop. I freeze apples in bags sometimes, but for me the frozen shape is more convenient for pies.

I don’t think you would be happy with the results if you let the apples thaw.

Definitely DO Not thaw, did that and I had applesauce in a soggy crust.
Here’s a hint I learned while watching Amish women bake. She was asked why did she sprinkle flour in the bottom of the pie pan before putting the crust in and the reason was to keep the bottom from getting soggy. We learn something new every day :<)

Thanks so much for this tip – I too have loads of apples and this sounds like an excellent idea.

I use the same method with other fruits as well and it seems to work. If I’m baking with a really juicy fruit like cherries I will add a couple of tablespoons of tapioca to the sugar mixture. A while back someone asked about freezing tomatoes and you can freeze green tomatoes. I use them for salsa, spice cake, jam, and other goodies. I love this blog!

This sounds so easy I’m going to try it today. My sister in law cans the apple pie mixture this sounds much easier. Thanks for the great idea.

shirley, sounds like a terrific idea, but i always use flour, about 1/4 cup per heaping 9″ pie. what exactly is your recipe and spices used. i like to mix sugar and spices and flour in with apples, dot with butter then bake. is this advisabkle? appreciate your comment, as have plenty of apples and freezer space. thank you

Denise, just make your pie the way you usually do, adding whatever ingredients you normally use. Just be sure that the filling is still frozen when you add it to your crust later on and that it is frozen when you put it in the oven.

Shirley, Thank you for ideas I have not run across in my 57 years of marriage. Never too late to learn, I guess.

I am looking on this site to learn about freezing apples and appreciate all the comments. In regard to Shirley, I do freeze fresh peaches. I cut to the size I will use (for pie, shakes, cereal, fruit crisp) and freeze laid on baking sheets/9X12 pans, until frozen solid. I then freeze whatever amounts I will use, with the Food Saver system. Peaches don’t loose colour or flavour.