Each night lately I’ve been sorting through photographs. Hopefully someday I’ll have them all in books, but meanwhile — what memories these old photos bring back. Last night it was photos of my youngest son, including some taken the morning of his first day of kindergarten when he was just under five years old.

That first day of school is one none of us will never forget.

For some reason the school decided that day to change the afternoon kindergarten bus route without telling the parents first. This meant that instead of a quick drive home on a familiar road, my son would be the last off the bus and would be riding the bus for well over an hour on roads he had never seen before. 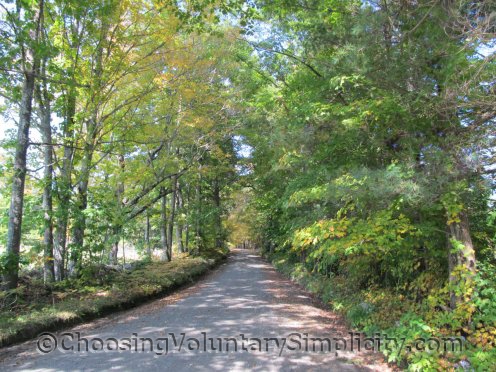 The driver was an elderly man who obviously was fond of children and loved to tease them in a very serious way… but my son did not know this then. So at the point when he was the last child left on the bus and the driver told him he didn’t know where he lived and didn’t think he would be able to find our house, my son believed what he said.

Eventually the bus was once again traveling on the roads my son had been expecting to see, and he was excited because now he could SHOW the way to our house… but now the bus driver insisted that he would need permission to let my son get off the bus, and since there was no one on the bus who could give that permission, the bus would have to keep going.

Finally, of course, they did reach our house and the bus did stop, but my little boy had been convinced that he would never make it home again. And because of my son’s efforts to be brave and not show how scared he was… and the bus driver’s astonishing lack of perception… the bus driver never knew how cruel his teasing had been.

That was so mean of the bus driver. He should have known better than to tease such a young child about such a serious thing. I have an uncle who teases our children like that, and I hate it. They don’t like him either. You should be really proud of the way your son reacted.

Yes, I’ve never been able to understand why some adults think it’s fun to tease children past the point of it being funny. I’m sure they can’t realize the effect such teasing can have on a child… I hope they don’t, anyway.

This is a wonderful post. It is so sweet that your little boy could tell the bus driver all that information to identify himself. You should be very proud of him and how he reacted in a very frightening situation for him. I am a regular visitor and really enjoy your blog!!

Wow, I cannot believe the bus driver would be so deceptive with your son! I mean, wow! Poor boy. If it were me as a girl I am positive I would have cried!

OMG I would have been ropable! My daugher is five and is on the Autism Spectrum. She would have had a complete meltdown and been unable to give any information or directions at all if that had happened to her! Standing Ovation to your son and lots of booing to the bus driver!

It would have been one thing to joke with him for a few minutes, let him get a little bit alarmed, then say, “I’m just kidding, of course.” Probably no harm would have been done then, and it might have served as social practice (i.e. learning how to identify a joke), but there was no reason to drag it on forever like that.

I am crying now after reading your story! I am so sorry for what happened on that bus. What a horrifying way for your poor child to start his school career! My kids would have been terrified!
We sometimes forget that children don’t catch on to subtlety, sarcasm, etc. I read somewhere that kids can not comprehend things like sarcasm till about age 8. Most people don’t know this, but on the other hand I would hope that most adults would have the common sense to know when enough is enough- or at the very least he could have said that he was only kidding.
It’s stories like this (and so many others) that make me confident about our choice to jump through hoops to get our kids into our walking distance school instead of bussing.

I wanted to say I have a similar story that happened to me on a regular basis when I was a child. Our substitute bus driver would pretend to pass out and “almost” crash. It was truly terrifying. He would bounce over curbs and pretend to lose control. Granted this was back in the late 70’s, but I still remember it. I vowed to keep my kids off the school bus, and I did.

I had a Bus Driver for years. I remember the man fondly if I had a problem he would drop me off at my brother in laws place without a problem even IF it was out of his way to do so. I took is teasing/ribbing with a grain of salt and he knew. I envy kids includeing my baby brothers for haveing the home school experiance.