Last night just after midnight we heard a terrific crash outside, followed by more sounds of wood breaking. The noise was coming from one side of the house, so we ran into the dining room and looked out the window on that side. There, less than two feet away, standing upright, was a massive black bear. As we watched, he got down on all fours and ambled (and that’s the only word that accurately describes the bear’s slow walk) through my hosta garden, heading towards the back of our house. Even though it was mostly dark I was hoping I could get some pictures, but by the time I got back to the window with my camera, the bear had apparently decided there was nothing around here that appealed to him, and he had turned around and was heading back out of the yard. Up to that point the bear had seemed completely unconcerned that we were watching him through an open window, even looking directly at us at intervals. Then something must have startled him because he started to run. Unfortunately the route he decided to take was right through the wooden fence. In seconds he had smashed through two four-foot sections and broken the sturdy wooden post supports.

This was definitely the largest bear we have ever seen. If you have not been near a large bear like this, you really can’t even imagine how massive they are. This one was so alarmingly huge, I’m just glad he was outside and we were inside… although we have had bears rip windows off our small “barn” (but that’s another story!). As we found out this morning, the bear had come into the yard through a second section of fence and had broken several heavy fence supports off at ground level there, too. There were other bears in the neighborhood last night… this morning we discovered a huge bear “wallow” in the grass near our little pond that was made after it got dark last night. Probably our visitor had been here a while. 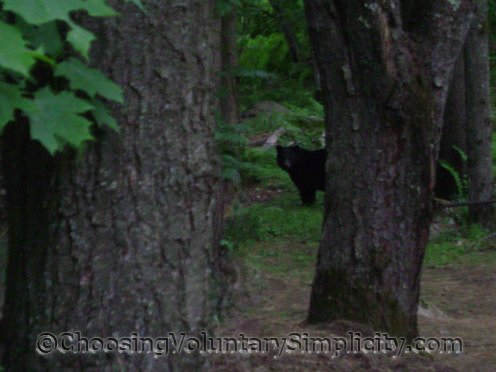 Not our midnight visitor… this small bear raided our bird feeder

We’ve always had bears in this area, but we have more than ever this year, and we think we now know why. We just found out that a man who owns land about a half mile away from us has established part of that land as a bear sanctuary (for tax purposes we suspect). We were not pleased to hear that he is actually feeding the bears on that property… this is not really what we need with so many bears already roaming around.

Between breaking down the fence to come in and breaking down the fence to get out and a quick stomp through the garden, this whole bear visitation episode probably lasted less than ten minutes. But it left us with ruined hostas, several four-foot sections of smashed wooden fence, and wooden fence posts that will need to be completely replaced. It’s too bad the bear didn’t tell us he was coming… we could have opened the gate!

A Little Book About Law and Life, Circa 1881

Wow, no bears around here. I’m glad, I don’t think I would want one to wander up on me some evening.

That must have been some experience. I can’t even imagine how I would feel if there was a bear that close to my house!! I’ve seen bears in parks and places like that but you feel safer there somehow. Do be careful. Although it sounds like you are used to having bears around.

Can the people in the neighborhood get together and do something to make this man stop feeding the bears? There must be a law about this because it sounds very dangerous. Great story though. I’m really enjoying your writing.

This post is one of the reasons I love your blog. Great story! Thanks for sharing.