Our extremely short summers and a celery plant’s need for a lengthy growing season are not a good match. Perhaps that is why it is impossible to find celery seedlings or even celery seeds in this area in any of the usual places where seeds or plants are sold. One store owner even told me that “nobody wants to grow celery anymore.” Perhaps not… but I do!

So about nine years ago I ordered a single packet of celery seeds from an heirloom seed company, and each spring… ten weeks before the last expected frost… I would plant celery seeds. The resulting seedlings would grow under lights until I could plant them outside, and the celery plants would grow as much as they could during our short growing season until the first frost cut them down. 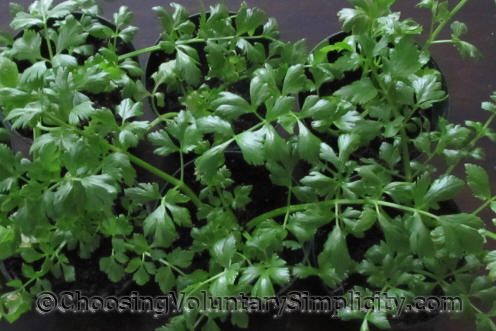 About five years ago, we were cleaning up the garden for the fall, and it seemed such a shame to let the beautiful celery plants be killed by the frost when they still had so much growing to do. I decided to pot up seven of the best plants and see what they would do in the house.

That first year I had no expectations. I certainly did not think that I would be able to keep mature celery plants alive in small pots until spring. I had cut the celery stalks down to the soil before I put the roots in the pots, and to my surprise the celery plants not only continued to live… they continued to grow. To keep the plants at a manageable size, I cut the stalks back to the soil every couple of months, and in just days new growth would appear again. When spring and warm temperatures finally arrived, I cut back the celery stalks one final time and planted the roots back into the garden. I gave the plants a rest from cutting all through the summer and just let them grow. At the end of the summer these celery stalks were bigger and broader than any celery we had ever grown before. Just before the first frost, I cut the stalks back to the soil and put the roots into the pots again.

I have brought these same seven plants into the house every year since then. They live in their pots in a cool window until spring, and then I put them back out into the garden. These winter stalks are thin, of course, because the plants are cut back so often, but they provide a constant fresh source of stalks and leaves… and during the summer in the garden these mature plants grow stalks that are huge.

I have no idea how long I can continue to recycle these seven plants, but it will be interesting to find out. So far this winter I have had to cut the stalks back once, and the new growth is already six or seven inches tall.

Do You Still Want To Shake Hands?

This was very interesting and helpful. I have an 85 day growing season(on average) and struggle to get my celery done before our early September frosts. I’m going to try this. Thanks!!

I had never thought of doing this. Like you I hate seeing the celery die before it has reached its growth peak. I’m going to try this another year.

I would love to have fresh celery in the winter – esp. since celery is one of the ‘dirty dozen’ I think. We live in a smaller town and none of the stores even sell organic celery. Guess what I’m going to do just before the frost next fall?

How interesting is that!?! I have space where I could do this. Now I’ve just got to find celery plants next spring or start some. I really enjoy this blog. I have learned such interesting things here.

Very interesting! We live in northcentral Montana. I was told by a friend that if I leave the swiss chard plants in the garden, they will come back up next spring. In this country, that is called being Hardy! However, I planted garlic the fall before and it came up in the spring just fine. So hopefully we will have earlier swiss chard next year. Also if I miss any potatoes, they volunteer the following spring and are better plants than the ones from seed potatoes. Likewise with the old squash and squash seeds that I throw out onto the garden throughout the fall and winter. Volunteers that I transplant. However, you have to keep track of where the zuchinis are versus where the pumpkins and winter squash seeds were thrown.
Thanks for this article! I think I will try it!

I never knew celery roots could be overwintered indoors. I may have to try this with a few plants here in PA!

Cool idea! I will give it a try too! My son’s challenge is to find the best watermelon for northern VT growing since these are hard to get to mature in short growing seasons!!
Thanks so much for the awesome information!

Thank you for sharing that. Very helpful. I have celry plants that came up again in the spring in my garden (planted last spring-flopped). I live an hour outside of Vancouver BC. They look very green (18inches tall, slender stalks)and not like the yellowy green I am used to seeing in the store. I am not sure when they might be edible and not bitter. Does anyone know how yellow they have to look before they are ripe to use??

Linda, the light colored celery you buy in the store has been blanched. Supposedly blanching makes celery more tender and less bitter, but I think green celery has a much better flavor, and our green celery is never bitter.

If you want to blanch your celery, about two weeks before you want to harvest it, cover the stalks to block out the sunlight with paper, boards, soil, etc.

Just looking for info on celery that lasted more than one year and came across your site. Very interesting!! Live in Louisiana and planted 3 celery plants in my small garden last year. Harvested celery to use in tuna fish (my favorite) and in cooking. The plants lived all through the winter and are the most beautiful green. Just used some this morning. Yes, it is thinner than the bought, but it is green and tasty. Never thought about cutting it back as it is so bushy now. Should I separate it or just leave in in one big clump? Thanks for any ideas. Love my small little garden.

Virginia, it would depend on the clump. Is it several plants growing together, or one plant that has branched out? If it was several plants, I think I might try to separate a few around the edges of the clump and watch how they do.

Or I might just leave the whole clump! :o)

Last winter I put a bunch of limp celery into a jar with water to let it crisp up again, then got busy and forgot it for several days. When I looked again, it was growing roots! I should have planted it!

I bought organic celery at Safeway, cut the bottom section off and placed it in a bowl of water until it rooted, planted it in my garden and it has done very well. Our growing season goes from April thru November.

Thank you, Shirley.
It doesn’t happen often, but that was EXACTLY the info I was looking for. I have two nice plants grown from grocery store stock, but not much luck over wintering them