I Hope She Didn’t Try To Eat Them…

My husband and I were clearing leaves and winter debris out of one of the hosta beds when we heard a car stop in the road just slightly past our house. A woman got out of the car and quickly walked to a flower garden we have created at the edge of our lawn. She was carrying a large plastic bag.

This particular flower garden starts with a thick backdrop of ferns planted in front of the stone wall that runs parallel to the road. We have planted bleeding hearts, sweet cicely, tulips, and daffodils in front of the ferns, as well as several colors of violets. The pinks, reds, yellows, whites, and blues of the various flowers look especially beautiful right now against the lush green of the ferns. 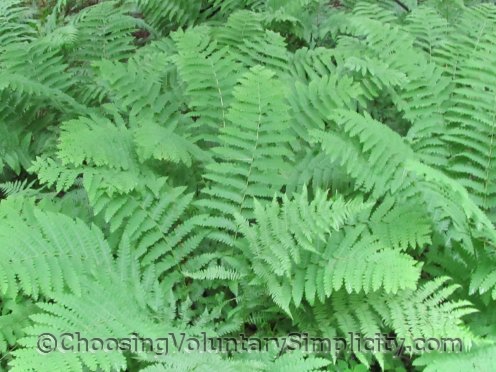 We’re used to people slowing down or stopping to look at this little garden, but we were justifiably concerned when the woman suddenly started ripping great clumps of the ferns out of the soil and stuffing them into her bag. It took us a few seconds to realize what she was doing and to get close enough to her to say something, and in that short time she had almost filled the bag with ferns. When my mild-mannered husband quietly asked her if she realized that the garden was private property and represented a lot of hard work that she was destroying, she snapped that she was only getting some “fiddlehead greens” and that we had plenty more. Even when we told her that these were not fiddlehead ferns and that this type of fern is not edible, she continued to pull up ferns and stuff them into her bag.

The incident ended rather badly. We told her to stop pulling up the ferns, she became very angry and stalked back to her big SUV. She was, however, still clutching the bag… and that bag was packed almost to overflowing with our fern fronds.

I hope she didn’t try to eat them…

One Year Ago Today…

Wow, I can’t believe some people! I am so sorry she was destroying your wonderful flower bed. I wonder whatever happened to the golden rule?

Unbelievable…We had a fruit tree on our tiny lot here in Miami, and I was never sure what the fruit was (nothing I was interested in, I can assure you). Well, lo and behold, some fellows had jumped our back fence that faces a street, and they were in the tree, picking away! Too bad the tree had to come down after dying about a year later…
I am sorry that nasty woman tore up your garden. You handled yourself much more ladylike than perhaps I would have. My hat is off to you for your graciousness.

How rude! People continue to amaze me.

Oh, boy. I have to laugh as we’ve said we’d do just about ANYTHING for fiddleheads when they are in season! But I think I’d pause for sure when someone tells me I”m in their garden and please back off! I don’t know what it is in our society that when confronted with our mistakes we get belligerent and defensive instead of saying “sorry!”.
Is it wrong to say that I kinda hope she tried to eat them. A tummy ache might cure her of trespassing!

Enjoying your blog very much!

With her bad attitude, maybe you should kind of hope that she did…

I’ve often seen people picking fruit off trees. One hopes that the lady will think twice if she ever ventures near your garden again.

Gosh! I wonder what prompted her to do such things… do console yourself thinking that you are in a much better place than she is… I would have done something drastic, I know. God bless you for being so non-violent!!!

Well if she did eat them and got sick she deserved it maybe next time she will think twice about doing something like that. I always say WHAT COMES AROUND GOES AROUND.

Wow, I kind of hope she did eat them, Serves her right for stealing your plants.

What a very rude person. I hope your garden recovers from her damage.

I just gotta say this — I hope she got a good case of the outhouse trots.

The nerve of some people!

Well i hope she did try to eat them. And i hope they tasted as nasty as she was to you that day. The nerve of some people and even if it were an honest mistake when confronted she acted as if she still had a right. Geez….

It sounds to me that the woman was not only rude and clueless but that she also had no idea that – if the ferns had already turned into “fronds” – then it was WAY too late to be eating them. (Not to mention that yours are not even eatable!) Fiddleheads should be picked in early spring when only several inches of green are sticking out of the ground. At that time the tops are curled up and somewhat resemble the carved end of a fiddle.

I don’t know how you and your husband remained civil! We have an acre of land with the majority wooded.The woods starts at the road and has trees,ferns,bleeding hearts etc up to the house approx 1/2 acre, the side is up an incline and has trees,ferns and alot of wild bramble, day lilies,and grass.And we have people over the 30 years we have been here trespass all the time.On the side yard because the town owns a strip then comes our yard the neighbors have mowed and dumped grass clippings,leaves etc EVEN with me speaking to them so eventually I had to call the police.It is a view into how society has decayed – no courteous no manners no boundries.

I once had someone parked in my driveway, cutting my forsythia.

Disgraceful behaviour. I weep for the future. I hope someone knows who she is and she is publicly ridiculed.