One of Nature’s Small Miracles

When the snow melted early this past spring, I was horrified to discover that the deer had totally decimated all of the sempervivums in several large gardens. They didn’t leave a single plant… each one was eaten right down to the ground. It was a discouraging start to the new growing season.

I knew that all of my sempervivums had had a very substantial root system, and at first I was hopeful that some of them would grow back from the roots. Then I called a few local nurseries and e-mailed several more online nurseries, all specializing in sempervivums, and everyone told me that my sempervivums were a total loss… that a sempervivum that has been eaten down to ground level is dead and will not grow again. It looked like I had lost all of the sempervivums in all of the gardens. 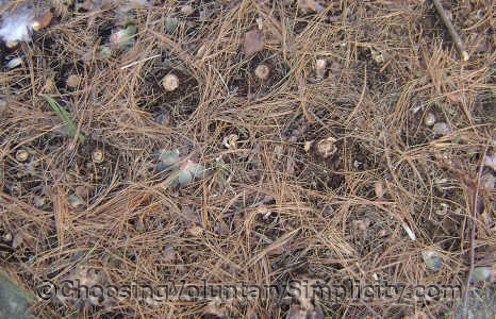 Early in the spring… nothing left but the eaten-down stubs

There was a lot to do around here this spring and I kept postponing pulling up the sempervivum roots. And then one day I noticed a tiny green “something” growing in the middle of the dead stub of one of the eaten sempervivums. It was only about the size of the white tip of a wooden “kitchen” match and way too small to see any detail. I took a digital photograph and enlarged it, and with magnification I could see that the green something was a complete tiny sempervivum that was a perfectly-formed rosette despite its miniature size. 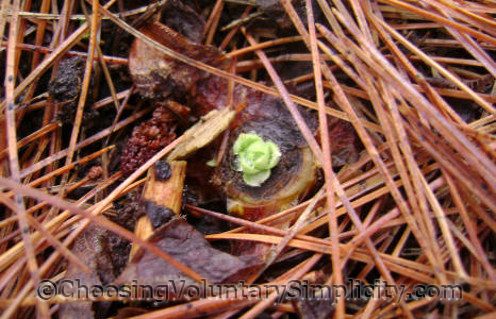 The first rosette (magnified… the sticks are pine needles!)

Over the next few weeks more tiny sempervivums grew out of the other dead stubs, and every one made its appearance as a complete rosette. It was almost unbelievable that something so incredibly tiny was so perfectly constructed. 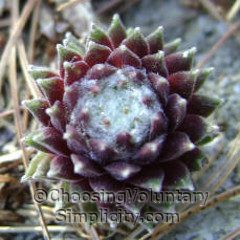 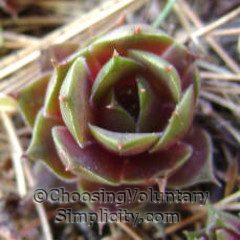 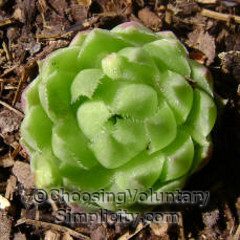 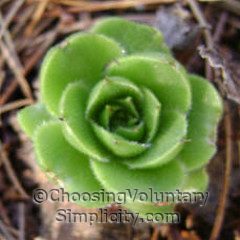 I still can’t believe that I didn’t lose all my sempervivums after all… or that those first tiny plants could grow so amazingly fast. Most reached a small adult size before the end of the summer, and many even produced babies… and all of this happened without any intervention from me. I am so glad I did not follow the advice I was given to count the sempervivums as a total loss and pull up the roots! 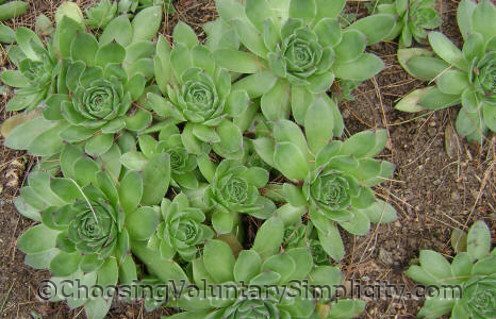 The question now is will the deer come back this winter? I really think last year’s deer feast was an aberration because I’ve had sempervivums growing in those same gardens for the last twenty years, and deer have never bothered them before. But… just in case… I purchased several jars of cayenne pepper and several containers of baby powder at the dollar store, and I have mixed the two together to scatter around the sempervivums. Supposedly deer find this combination extremely distasteful.

When We Stop Stuffing the World with Things

Never say never when it comes to plant life. I am always amazed to see how resilient nature can be.

I am so happy you did not get around to pulling up those roots! Ain’t nature grand? :)

What a kewl story! I love it when things happen like this. I looked at the other pictures of your sempervivum’s and they are gorgeous. You must have wonderful gardens.

Those poor eaten plants look so sad. I was glad to read the rest of your post and find that they got another chance at life. I think your blog is great btw. I’m new at gardens and hope someday to have a green thumb like you do.

I’m kicking myself right now. I have hens and chickens too, nowhere near as many as you, but I had a nice section of them in my front yard. This spring the deer ate most of the tops off just like yours in the pictures. I asked around at our local garden center and got the same answer you did, so I pulled mine up and threw them away. Now I’m wondering what would have happened if I would have just left them where they were. I know what I’ll do if this ever happens again. For my deer repellent this year I’m using dog hair, I’ve been saving the clippings every time the wife took the dogs to the groomers. Great blog, I read it regularly and always take something useful away from it.

My aunt had a garden and she always put soap around the perimeter to keep deer away. She would buy the cheapest soap she could find and cut each bar into 3 or 4 pieces. The rain would wash away some of it but it would last longer than you would think. She said the deer did not like the scent. Perhaps it is the same thing with the baby powder? Great post. Thanks.

That’s so great! We have very few hens and chicks that live in planters my fiance made out of an old pallet he got from work. I love them so :o)

Thanks for confirming my thought – I have a fence around my Sempervivum area, so I’ve never had to deal with the deer eating them down to the roots. Interesting to know that they do have the ability to regrow. I wonder if they can do the same thing after wild turkey devastation?

My husband started pulling up my “dead” sempervivums this year and I almost lost it. Mine die off in the late summer heat each year, but every spring they’re back. How he didn’t notice this fact is beyond me – I think he thought I kept buying new plants every year!

They don’t call them “always living” for nothing! I’m glad your plants came back :).

Glad your plants came back. I have a large bed that my grandmother started years ago(the house I live in is more than a hundred years old). The “hens and chickens” are on the south side of the house, so are protected in the winter, but they almost always get “pruned” to the ground when I bring the baby goats to the house every year. I milk the does, so must bottle feed the babies. I bring them to the house because it is easier to manage feeding times. I never dreamed they wouldn’t come back, and they seem to thrive on being “pruned!” Like they say…ignorance is bliss!