I almost never use powdered sugar, partly because we eat sweets so infrequently, and partly because I dislike the way even the national brands of powdered sugar taste now. (Too much corn starch, perhaps?) I haven’t bought powdered sugar for a long time and haven’t really missed it because I only use it for the very occasional butter cream frosting. But today my husband asked if I would make cinnamon buns, and of course there was no powdered sugar in the house.

I had “recipes” for what they called “two easy methods” for making powdered sugar out of granulated sugar… one using a food processor and the other using a blender. I decided to try the food processor method first. It was definitely not a success. After an extremely long time of processing, I did eventually manage to get a powdery sugar, but there were still visible tiny sugar crystals, and the consistency was definitely not powdery enough. When I tried using a small amount of this sugar to make the icing, it was a rather gritty failure. 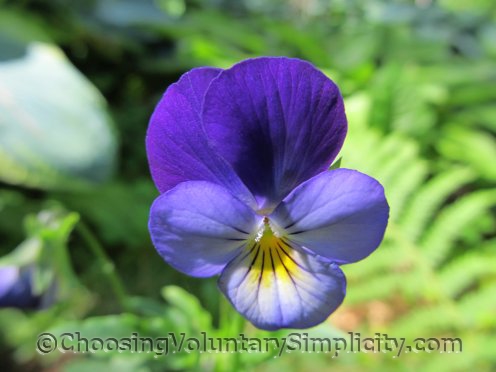 Because of my poor results using the food processor, I almost didn’t try the blender method. I hadn’t added any corn starch to the first batch, so by this time I was thinking that perhaps that was the problem, and maybe something about the corn starch helped the sugar crystals to grind more completely. But since what I don’t like in the commercial powdered sugar is probably the taste of the corn starch, I decided that I would start by grinding just the sugar. Maybe my food processor just isn’t powerful enough, but what a difference that blender made! It was amazing how quickly the blender turned the granulated sugar into real powdered sugar with absolutely no visible sugar crystals. Best of all, the whole process probably took only three or four minutes. I never did add the corn starch, and the blender homemade powdered sugar made up into a wonderful icing for those cinnamon buns.

It’s always nice to find an idea like this that really works.

Note: If you are trying to avoid GMOs, look for the words “cane sugar” on the granulated sugar package. Sugar that is labeled only as “sugar” is almost always made from sugar beets… 95% of the sugar beets grown in the United States are genetically modified.

The Vet, the Economy & Our Ferocious Dog